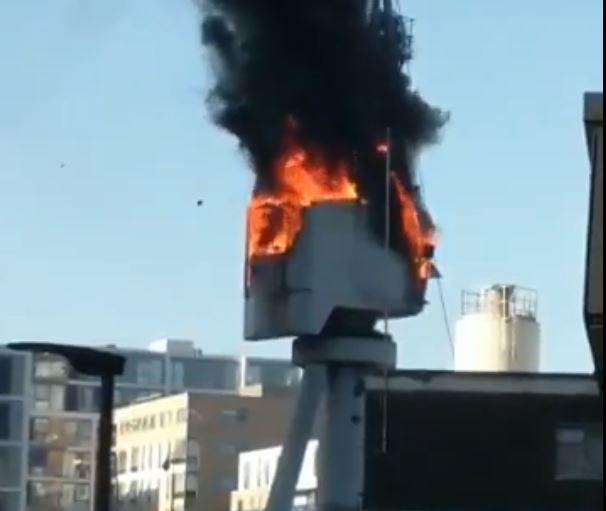 Fires raged and ranged in and around London in week ending July 13 - from an office block fire in Westminster to a waste fire in Leyton. Bizarrely a riverside crane burning like a birthday cake candle was spotted on June 30.

July 11 just before 2:00pm saw four fire engines and 21 firefighters and officers called to a fire at an office block of seven floors in Belgrave Road, Pimlico near Victoria in Westminster.

A small section of the first floor was damaged by fire. Around 300 people left the building before the arrival of the Brigade.

Just as the ThisWeekinFm Summer Boat Party was set to set sail, smoke could be seen rising beyond the City of London.

Ten fire engines and 72 firefighters and officers were called at 5:15 to fire at a waste management site in Auckland Road, Leyton.

Around half of 1,000 tonnes of waste is was alight - and continued to smoulder in to the morning of July 13.

Station Manager, Dave Green at the scene and said: “Mechanical diggers are being used to make fire breaks to prevent the fire spreading. This is likely to be a protracted incident and fire crews are likely to be working throughout the night damping down pockets of fire to ensure there's no reignition.“

Fire At Building Under Construction

July 9 - fifteen fire engines and 97 firefighters and officers were called to a fire at a commercial property under construction in West Drayton - near Heathrow airport.

The fifth floor of the six storey building was destroyed by the fire. Fortunately, no one was injured. The fire burned from nealy 6:00pm until 9:00pm.

The same evening, four fire engines and 21 firefighters and officers were called to a fire at an open air refuse storage compound in Edmonton. Eighty tonnes of mixed refuse was destroyed by fire. A temporary building was also gutted by the blaze

The cause of the fire is believed to have been caused by the self-heating of compacted refuse. When rubbish is stored for longer than 72 hours it increases the risk of self-heating.

July 3 had also seen a fire at a recycling depot in Uxbridge where round 60 tonnes of recycling and refuse materials were destroyed by fire. This fire is still under investigation.

July 8 saw four fire engines and 21 firefighters and officers called to a basement fire underneath a conference centre in Hammersmith Road, Hammersmith just before 9:00pm.

The fire was contained to a laundry room located in the basement. The control room for the conference centre was alerted when smoke was seen at the front of the premises and two smoke alarms sounded. Around 80 people left the building before the Brigade arrived.

A London Fire Brigade spokesperson said: "Incidents like this show how important it is to have a working fire alarm in homes but also businesses. That means that if there's a fire, there is a way for that fire to be easily detected and people can be warned easily.”

The fire is believed to have been caused by a faulty tumble dryer.

Four fire engines and 21 firefighters and officers were called to a crane alight in Greenwich. Approximately half of the crane was damaged by fire. Four people left the industrial site before the arrival of the Brigade.

The Brigade’s 999 control officers took more than 50 calls to the visible fire which broke out just after 6:00pm on June 30.

The cause of the fire is believed to be accidental and due to a hot cutting torch flame coming into contact with oil residue.

Firefighters have issued a smoke alarm reminder after a fire at a sports pavillion in Poplar High Street, Poplar on June 26.

There was no alarm system in the property and the Brigade were called after a member of staff saw smoke outside on the bowling green.

A London Fire Brigade spokesperson said: "Incidents like this show how important it is to have a working fire alarm in homes but also businesses. That means that if there's a fire, there is a way for that fire to be easily detected and occupants can be warned easily.”

Half of the roof was damaged by fire and the remainder of the property sustained smoke damage. Around 30 people left the building before the arrival of the Brigade.