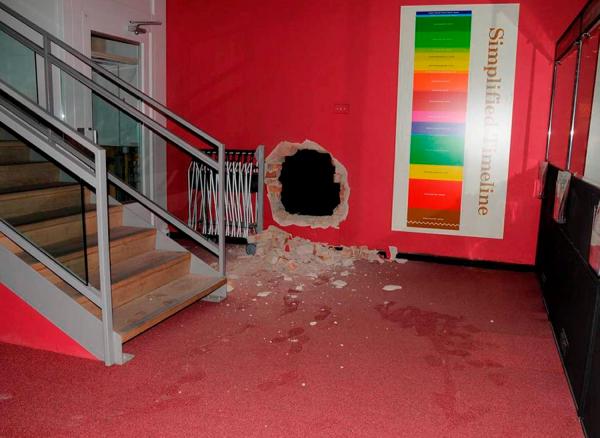 As reported across a number national media this week (and with thanks for clarification to STV, the Irish Times and Irish independent), thirteen members of an Irish gypsy criminal gang have all been jailed for stealing and attempting to steal Jade and rhino horn and other priceless artefacts from museums all around the UK. A fourteenth man had already been sentenced last year.

The gang have been called the Rathkeale Rovers because they travel the globe in caravans, returning perhaps once a year to Rathkeale, a town in Ireland dominated by barely lived in mansions, to celebrate their wealth - much derived from criminal activity, it is claimed.

The gang became renowned for robberies that ranged from breaking in through walls to smash and grabs. In more than one incident, the items that were grabbed were too heavy to be carried. On one occasion, the thieves were caught but their 'swag' was spirited away in a taxi.

Cambridge's Fitzwilliam Museum and Durham's Oriental Museum were hit in 2012. The original trials (there were three trials. The gang were found guilty and returned for sentencing this week) heard that the artefacts stolen from Cambridge and Durham alone could fetch three times their estimated value of £18 million on a booming Chinese auction market.

The court sessions had heard the gangs tentacles stretched to England, Scotland, Northern Ireland, the Irish Republic, France, Germany Hong Kong and the United States. Phone and travel records recovered by the authorities identified locations where members had been to identify possibilities such as the Burrell Museum and Kelvingrove Gallery in Glasgow in 2013. There are over 10,000 items between the two collections with those of Chinese origin - being substantial. Castle Museum in Norwich was also targeted and Gorringes Auction House in Lewes East Sussex was hit.

Rhino horn, which was on the target list, is said to be worth £200,000 per horn to the illegal Chinese remedies market. The gang is associated with rhino horn robberies across Europe including from the National History Museum warehouse in Dublin in 2014 and from the Cork home of River Dancer, Michael Flatley.

Picture: Durham's Oriental Museum after the 2012 robbery - with thanks to Durham Police Force