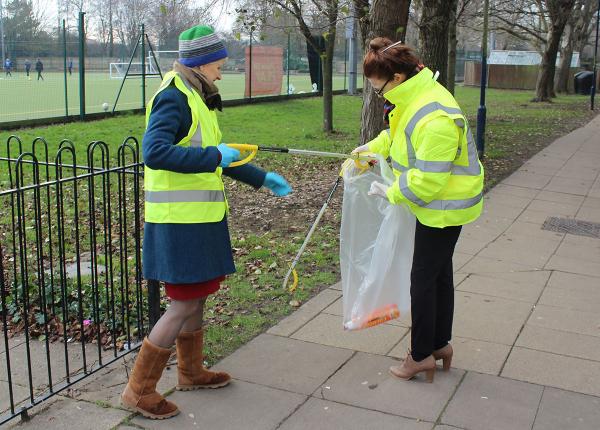 Chichester College teamed up with Nviro recently for its ‘Respect the Environment’ week - a campaign to eliminate litter at the college and raise awareness of landfill issues.

The college is rated as outstanding by Ofsted for both its academic achievements and its beautiful campus. Staff and student had though expressed frustration at litter and people smoking in undesignated places. So the college organised a ‘Respect the Environment’ week to collect all rubbish over a five-day period.

The goal of the campaign was to encourage students to take responsibility for looking after their local and wider environment and to reinforcing the importance of recycling and disposing of litter appropriately.

Nviro has been providing cleaning services for the last 18 years - so was pleased to join in.

Throughout the entire week, large teams of students and staff, including college Principal, Shelagh Legrave OBE, braved the cold to go out on ‘RESPECT’ patrols. They picked up litter, challenged those smoking in undesignated places and encouraged students to recycle their cigarette butts.

To highlight and raise awareness of landfill and environmental issues, students and staff also held events in the canteen. This included getting people to identify their carbon footprint as well as games and quizzes to help people understand what can and cannot be recycled.

Legrave said: “Over the past term we felt that there was a need to increase awareness about respecting our environment. While the message was to keep the college tidy, we wanted our students and staff to also think about the wider impact at home and in the community. I was impressed by the level of litter collected. It wasn’t as high as I feared, which was really encouraging, and hopefully we’ll see even less now.”

Nviro has introduced a recycling system for cigarette waste which has previously been deemed non-recyclable. The system not only helps to eliminate the idea of cigarette waste but also turns it into something useful. Waste collected through the Cigarette Waste Recycling Programme is recycled into a variety of useful plastic products, such as outdoor construction site hoardings and lumber. Any remaining tobacco or paper is composted – nothing goes to landfill.

Picture: Teams of students and staff, including college Principal, Shelagh Legrave OBE, braved the cold to go out on ‘RESPECT’ patrols

James Rubin, owner of EnviroWaste, highlights some of the most unusual items he and his staff have found in commercial and domestic hauls and skip hire collections in the...

UK toilet manufacturer Propelair has designed toilet flushing with a system using air and only 1.5 litres of water. The technology has already been adopted by a...

Giving the Great Flood the Sack

Essential to any clean-up are black sacks and they are required in their 1,000s in Carlisle following the recent devastating floods.   BPI Recycled Products...

Dealing with Coughs and Sneezes and Nasty Diseases

A new air quality control system for public and shared spaces is now available in the UK from Fellowes. The AeraMax Professional is claimed to remove over 99% of...

Apple of Your Eye

Manufacturer and supplier of hygiene products, Vectair Systems, has competed against more than 500 other nominations in the Green Apple Awards for Environmental Best...

A Canadian led study has found that urban grime has a tendency to release air pollutants when exposed to sunlight. Claiming to be ground breaking in its findings,...