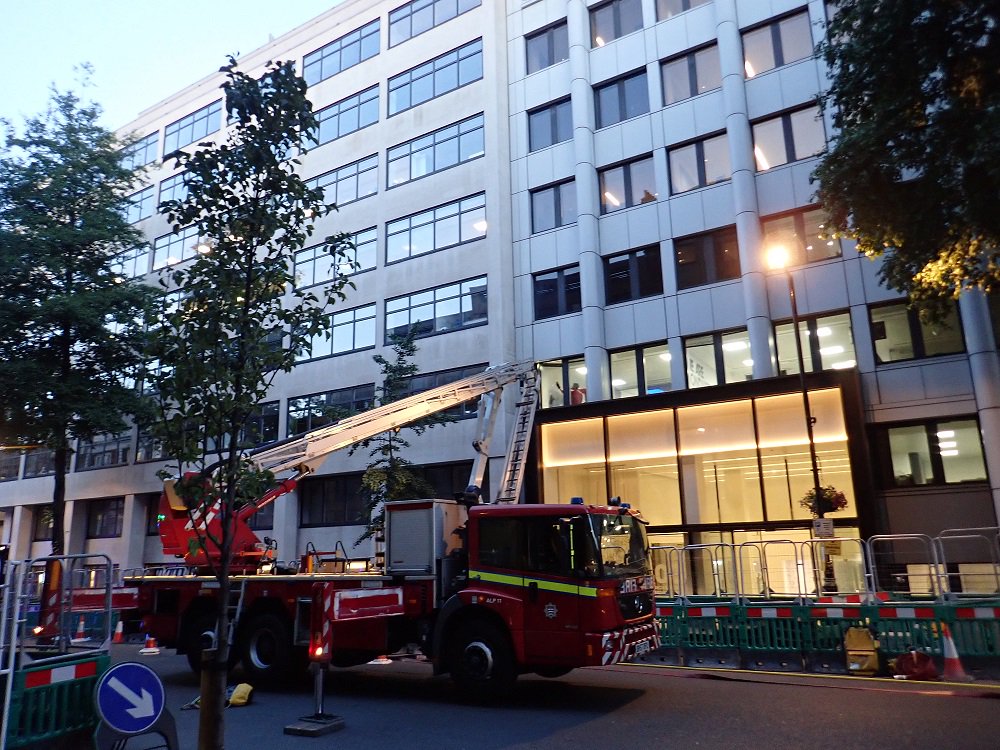 We have news of three London fires - one in a West End office block was spotted by security staff who evacuated 20 people but suffered smoke inhalation themselves. We also have a guide on avoiding office fires.

Four men were injured after a fire broke out a ten storey office block in London's prestigious Wigmore Street just behind Oxford Street on Monday June 11 night. The London Fire Brigade was called at 8:40pm

The fire damaged a small part the external façade of the building.

Security staff were alerted to the blaze by a fire alarm. They located the fire and evacuated 20 people from the building. The four members of the security team suffered smoke inhalation and were treated on the scene by ambulance crews.

Five fire engines and 31 firefighters and officers from Paddington, Chelsea and Lambeth fire stations attended and the fire was out just after 10:00pm.

The Brigade’s fire investigators believe the fire was caused by a cigarette being dropped onto rubbish that had accumulated at the base of the outside of the building.

If you're responsible for an office environment, there are specific areas of fire safety you need to really pay attention to.

Top causes of fires in offices?

Why fire safety matters so much

You are risking lives if you don't act responsibly.

It makes good business sense – the Association of British Insurers reported that around 60% of private businesses never recover from a fire.

It's the law – you can be fined and may even face time in prison if you don't meet your legal obligations.

Many  think that fire safety is their landlord's responsibility but this isn't actually true. Though landlords need to keep buildings structurally safe, tenants have responsibilities too.

Everyone in business needs to complete a Fire Risk Assessment and make a emergency plan. This is the law – and it's also good practice as it helps you identify and mitigate against risks.

Most common fire risks in offices?

Not planning appropriate escape routes – always take into account different people's abilities to respond to and escape from a fire.

Electrical faults – these often happen when portable items aren't properly tested and maintained, or when the electrical system itself isn't in good condition.

Electrical equipment – where lighting is placed too close to flammable materials.

Wedging fire doors open – properly installed and maintained fire doors can hold a fire back for 30 minutes but only if they're closed.

How to reduce fire risks in office environments

Complete your Fire Risk Assessment and make an emergency plan.

Have your fire doors regularly maintained and don't let staff wedge  them open – even on hot days!

Make sure all electrical items are tested and maintained.

Ensure your electrical system is regularly tested too – at least once every year.

Educate your staff about the risks of overloading sockets, and make sure no-one is using counterfeit phone chargers.

Make sure that fire safety training and fire drills to be carried out regularly.

Consider people with disabilities – not everyone will be able to respond to and escape from a fire in the same way.

Don't forget your neighbours – it's important to consider the risks to people who live above you if you share premises.

The day before, eight fire engines and 58 firefighters and officers were called to a fire at a hospital on The Ridgeway in Enfield.

A small part of the ground floor of a two floored building was damaged by fire.

Forty five people were evacuated from hospital wards before the Brigade arrived. Seven people were treated for smoke inhalation at the scene. Fifteen people had to be moved to alternative accommodation on site for the night.

One o'clock in the morning of  June 13, saw six fire engines and 35 firefighters and officers called to a fire at a recycling plant on an industrial estate in London's Barking.

Approximately 200 tonnes of mixed refuse was alight. It took until 8:00pm to put the fire out.

Commercial property owners and their tenants are being urged not to neglect fire risk assessments during the pandemic. The warning comes as property insurance...

One Cigarette A Day Won't Keep Doctor Away

Only total cessation of smoking will protect people and populations from tobacco’s toxic legacy says the BMJ, with just on cigarette a day seriously elevating...