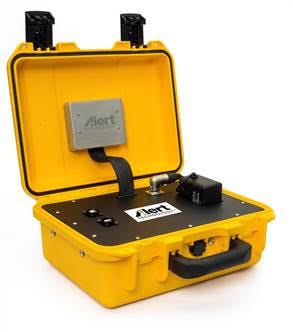 SOCOTEC is trialling a new device that provides real-time data and warnings for airborne asbestos.

The device emits an alert if asbestos fibres are detected within the atmosphere and enables the identification of activities that may have caused fibre release.

Asbestos can be found in any building built before the year 2000 and causes around 5,000 deaths every year, according to the HSE.

The asbestos monitoring method used within the ALERT PRO1000 comprises a two-stage analysis process involving laser light technology and magnetic alignment. Upon being drawn into the unit particles are illuminated as they pass through an optical chamber which produces a light scatter pattern.

Each particle type has a distinguishable scatter pattern which enables the unit to determine if the particle is a fibre or not. The light scattering technique alone is not enough to differentiate between asbestos fibres and other fibres, and as such the magnetic alignment of asbestos fibres is also used to confirm presence.

SOCOTEC’s Asbestos team is currently trialling the ALERT PRO1000 during intrusive surveys, managing risk on sites and also during remedial projects, with the ultimate aim of gaining a better understanding of the PRO1000’s full potential. While by no means replacing the traditional HSE-recommended approach, the unit has been developed to encourage best practice rather than being led by legislation. Nevertheless, Section 5.44 of the new HSG248 guidance does state that real-time ‘live’ monitoring can be used in sensitive situations to monitor for relative increases in levels of asbestos fibres.

“As a market leader in environmental monitoring and consultancy, SOCOTEC is always looking for new ways to innovate, and our trial period with Alert Technology Ltd enables us to do exactly that,” said James Dodgson, Commercial Director of Asbestos, SOCOTEC UK.

“We are currently trialling this patented technology in order to recognise its potential for a variety of uses and applications, as well as to ascertain how we can go above and beyond compliance requirements for our client base.”

“Alert Technology are delighted to be working with SOCOTEC, and the combination of our patented technology and their expertise is already delivering really positive outcomes” commented Dan Rushton, EU and UK Sales Manager of Alert Technology Ltd.

“SOCOTEC is the first organisation in the UK to be running longer-term trials on a range of sites, and we are extremely appreciative of the support they have shown us since the launch. We look forward to working more closely together on future endeavours and have started discussing our next-gen cloud-based model, the ALERT Connect PRO2000, of which their input will be extremely valuable.”

Picture: a photograph of SOCOTEC's device

Research suggests that the global market for commercial building ventilation and indoor air quality is set for huge growth, as businesses demand the creation of...

Getting HVAC Systems Ready for Summer – A Guide for Facilities Managers

With summer on its way, what are the most important steps facilities managers can take to ensure HVAC systems are optimised for effective performance in hot...

Which Common Houseplants Have The Biggest Impact on Indoor Air Quality?

Ordinary potted house plants can potentially make a significant contribution to reducing air pollution in homes and offices, according to new research led by the...

Part F Regulations for Ventilation in Buildings – A Guide

Building managers and FMs are preparing for changes to Building Regulations regarding ventilation and indoor air quality. According to actionforcleanair.org.uk, poor...

Is UV-C the Answer for Tackling Airborne Infection in Buildings?

Pressure is mounting for FMs and building owners to deliver solutions capable of reducing the threat of airborne disease transmission in buildings, so is UV-C a viable...