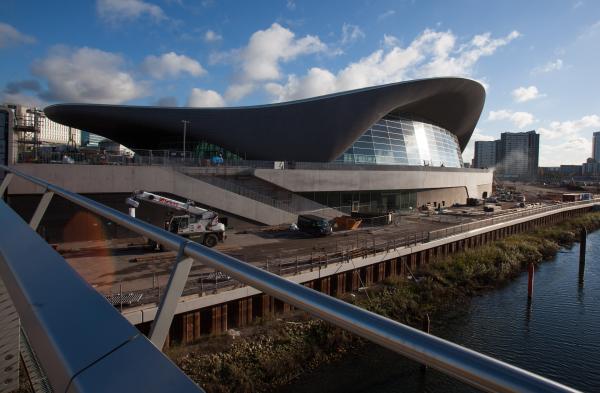 Following the successful London Olympics, the Queen Elizabeth Park will see the opening of the Aquatics Centre to the public this March with a series of events and public swimming .

The construction works of the completed outside of the Aquatics Centre included removing the temporary seating stands, that held 17,500 seats during the Olympics and installing 2,800m² of glass and eight doors along the sides of the centre, permitting natural light into the pool.

Accessibility at reasonable prices, has been a goal and adult visitor ticket prices for the Aquatics Centre will start from £4.50 a session, while the child rate is less than £3.50.

The centre, which has two 50m pools, a diving pool and a newly installed gym, will also host the 2014 Diving World Series.

This venue will be operated by Charitable Social Enterprise, GLL. Peter Bundey, GLL Director, declared: “As operators of the London Aquatic Centre and Copper Box Arena, Queen Elizabeth Olympic Park, it is very exciting to see the venue transformed into legacy mode.

“We look forward to welcoming local communities to swim in this iconic venue which will be an important element of delivering a lasting legacy from the games.”

On top of this, the London Legacy Development Corporation (LLDC) has also published plans to reopen the southern section of the park on 5 April. LLDC chief executive, Dennis Hone, said the opening of the south of the park was "a huge moment in our vision to create a new heart of east London".

There is some disappointment that visitors will not be able to access the Olympic Stadium until 2016. The stadium, has had a degree of controversy surrounding it after the games, when it was announced that it would have a multi-purpose use for sport.  West Ham United will be the main occupant when the stadium is due to open in August 2016, although it will host five matches during the 2015 Rugby World Cup.