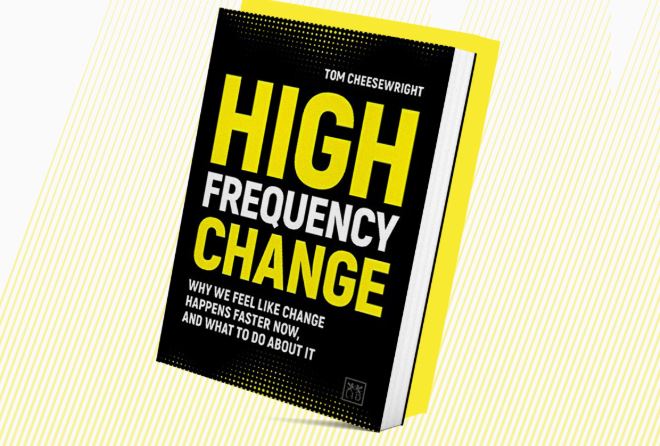 If you feel like you can't keep up with the pace of change, then you're not alone. 69% of UK adults feel like change happens faster now than 20 years ago, rising to 75% of those over 55.

The survey of 2,171 UK adults was conducted by YouGov for the launch of applied futurist Tom Cheesewright's new book, High Frequency Change, which attempts to explain this phenomenon.

The idea that change happens faster now than in the past has been popular for over a decade, as the pace of technological change appears to increase. It feeds the belief that we are approaching a technological 'singularity' where machines begin to advance beyond human control. But historians frequently reject the idea of accelerating change, pointing to previous periods of dramatic change, through the industrial revolution, the shift from horse to car and the advent of domestic automation.

In High Frequency Change, Tom Cheesewright aims to settle the argument, suggesting that change is too complex to be described as either 'fast' or 'slow'. He suggests a better way is to think of change in the form of waves with both amplitude and frequency. The connected computing revolution is another low frequency wave with high amplitude (impact) and long wavelength (duration), just like previous technological revolutions. But it has enabled high frequency changes, which have a lower overall impact but rise and fall incredibly quickly.

"Neither people nor organisations are prepared for high frequency change. We don't have the tools to deal with it, so it is incredibly disruptive to our ability to plan and operate," said Cheesewright. "We need a new way of thinking about business, and our own careers, if we want to build sustainable success in this age of high frequency change."

Picture: High Frequency Change is available in stores and online. To read a sample chapter of the book - Click Here