Two Sides to the Curve 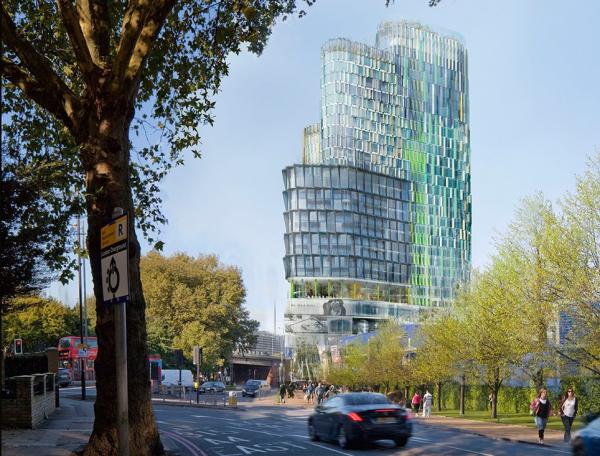 Plans to have a massive building development in Chiswick west London has provoked outrage in some quarters matched by the prospects of better facilities and employment in the area.

In its planning proposal, the developer, Starbones, a subsidiary of Galliard Homes, is looking to redevelop land at the Chiswick Roundabout, bordered by the Great West Road and Gunnersbury Avenue.

The Chiswick Roundabout also forms an important part of the western entrance to London; the meeting point of the North Circular and South Circular Roads and commencement/ending of the M4 flyover.

Starbones claims it is ‘weaving’ together new proposals for an ‘innovative, mixed use building comprising basement car park, public viewing gallery on the 32nd floor and 50,000sqft of space for offices and restaurants, employing up to 450 people. Approximately 30% of the one- to three-bedroom flats are said to be affordable by the developer.

The architect is Studio Egret West and it describes what it and the developer are attempting to achieve in the submission. ‘The facades respond specifically to their orientation to reduce heat gain but also through the tonality of the materials accentuate a sense of aggregated forms.’

In what could be seen as an admission that the scale of the building might be at odds with the surrounding area, the architect’s description goes on to state: ‘This quality is particularly successful when the building is seen from afar on the skyline. The curved facades and the stepped terraces help to soften the sense of mass and create a graduated transition between light and shadow.’

The first six levels dedicated to new start up businesses occupy the whole site ‘footprint’. Above, the residential levels are said to ‘elegantly divide’ into two main blocks of different heights.

Starbones has used colourful language in its submission to Hounslow Council. ‘At the heart of the design strategy is the aim to unlock and realise the extraordinary potential of this currently derelict site, to overcome the severance effect of Chiswick flyover and offer improved, sheltered routes for both pedestrians and cyclists around Chiswick roundabout. The wide range of apartment types has been designed from the inside-out to meet residents’ present and future needs. In addition to communal spaces located at different levels of the building, a genuinely mixed and sustainable community will be created.’

Objections to the Curve

Despite its claim to ‘weave’ the community together, Starbones’ submission contains a controversial ‘poor door’ whereby the residents of the 100 or so affordable housing units will have to use a separate entrance.

Resident groups have begged to differ with the architect and developer over the presence of the building complex with criticism that the predominantly glass covered complex is a 'monstrosity'. Una Hodgkins, of the campaign group, Save Our Skyline, has written in a letter of objection that the ‘proposed development is far too tall, too dense and completely out of keeping with its surroundings. In addition, the design is boring — international glass towers that apologise for their existence by becoming more transparent as they rise higher up.’

The proposed Chiswick Curve supersedes the previous attempt on the site that was dubbed the London Octopus but which would have been a more modest 10-storeys.

Doubts have also been raised over how the local infrastructure will cope with such a large complex and that it is out of keeping with the local area.

Picture: The proposed Chiswick Curve has already caused a stir among local residents with some calling it monstrous