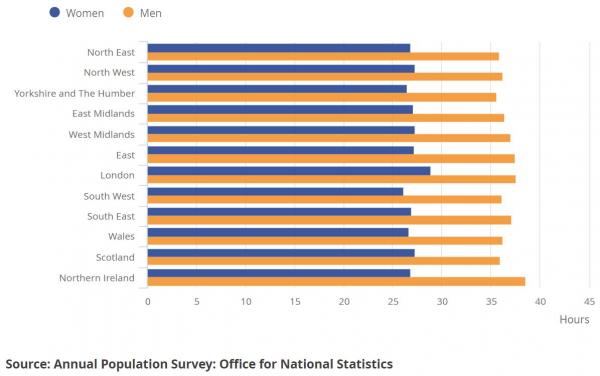 For the period January to December 2016, the UK region with the highest average actual weekly hours worked (for all workers) was London at 33.7 hours, followed by Northern Ireland at 33.0 hours. Yorkshire and The Humber had the lowest number of hours worked at 31.3 hours.

This means that Londoners generally work an extra three weeks a year over and above their regional counterparts - and we know lots of those long hours are spent in the Capital's office buildings. The financial services industry prevalent in London is renowned as a hard task master; whilst the attractiveness to younger employees with a desire to work longer to progress their careers - and the salaries that will help pay for the high cost of accommodation.

The region with the highest average actual weekly hours worked in full-time jobs was London, at 38.4 hours. This represents an increase of 0.8 hours and a percentage increase of 2.1%, compared with the same period last year. The lowest were Scotland, the North East and the North West, all at 36.9 hours.

For part-time jobs, the region with the highest average hours worked was Northern Ireland at 17.0 hours and the lowest was the South East at 15.8 hours.

Picture: Average (mean) actual weekly hours of work, by region and by sex, January 2016 to December 2016

More than thirty years ago, Dolly Parton sang about working 9 to 5 because those hours represented the typical working day. But new research from YouGov Omnibus...