Another Body Recovered at Didcot 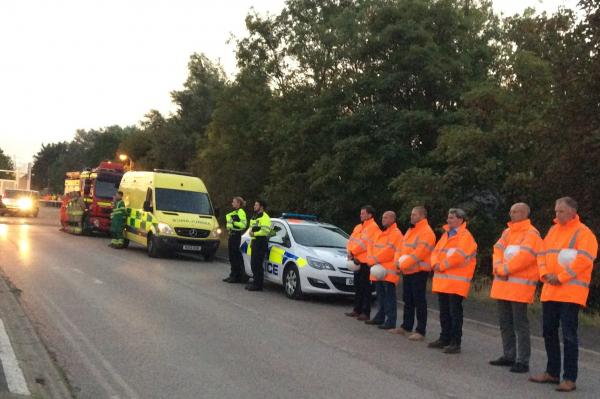 A Guard of Honour was formed on the morning of September 8 following the discovery of another body (the previous day) of one of the workers who died at the Didcot Power Station explosion and collapse. It was held to mark the removal of one of three missing men since the incident of February 23. Another body was also recovered on September 1. Only one now is still missing.

Representatives from the families of the missing men, Thames Valley Police, the Ministry of Defence, Oxfordshire Fire and Rescue Service, RWE (owner of nPower) and Coleman and Company (who the missing men worked for).

On Friday 9, the body was confirmed as that of Ken Cresswell and the family informed. John Shaw remains missing.

'Thames Valley Police have confirmed that the second body recently recovered at Didcot A Power Station site has been formally identified as Ken Cresswell. Our thoughts are with Ken’s family at this very difficult time and with the family of John Shaw, who remains missing at this time. Recovery works recommenced this morning and our contractors will work 12 hours a day, seven days a week until John Shaw is found.'

Picture: The Guard of Honour

Three people were still missing, presumed dead, at the site of the Didcot A Power Station explosion and collapse of February 23. On Wednesday Aug 31 one body was...