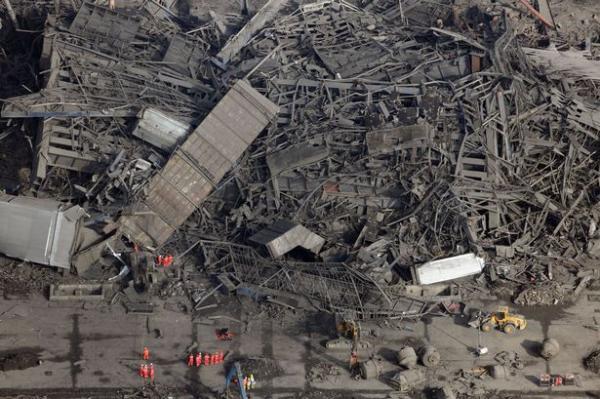 Three people were still missing, presumed dead, at the site of the Didcot A Power Station explosion and collapse of February 23. On Wednesday Aug 31 one body was discovered. It was recovered the following day (at about 1:00am) and sent to the coroner of the Disaster Victim Identification authorities.

Clearance work had resumed in July recently after a two-month lay-off culminating in demolition. The plant had been undergoing scheduled demolition at the time of the disaster.

A Guard of Honour formed of colleagues, families and friends was assembled to mark the emotional occasion. They were joined by Thames Valley Police, Oxfordshire Fire and Rescue, South Central Ambulance Service, RWE and Coleman and Company. RWE is the division of nPower which runs the Didcot facilities. Coleman and Company was responsible for the scheduled demolition of Didcot A.

Thames Valley Police said 'the body is thought to be one of the three men who have been missing since the partial collapse of the boiler house at the power station in February, although formal identification is yet to take place'.

As soon as the body was discovered, contractors paused the removal of debris so that specialists from Thames Valley Police and Oxfordshire Fire and Rescue and the South Central Ambulance Service Hazardous Area Response Team could enter the site.

Four people (all employees of Coleman and Company)in total died in the disaster. Michael Collings, was recovered soon after. Ken Cresswell Chris Huxtable and John Shaw were not. The families of the missing men had pleaded for a quick resolution but the danger of further collapse made the recovery operation slow and painful. July 17 saw a controlled demolition of Didcot A using remotely controlled vehicles.

Picture: The demolished Didcot A site where a body has been found

Another Body Recovered at Didcot

A Guard of Honour was formed on the morning of September 8 following the discovery of another body (the previous day) of one of the workers who died at the Didcot Power...