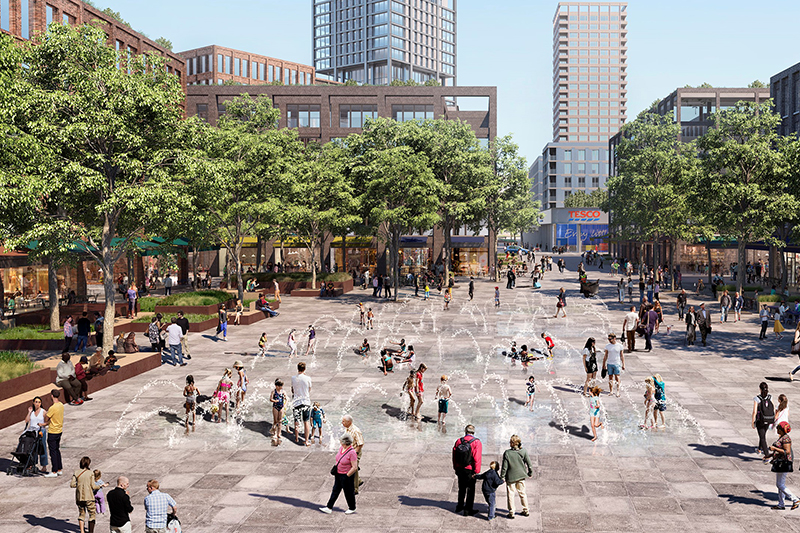 The Canada Water Masterplan is a 53-acre, mixed-use scheme that will deliver around two million sq..ft of workspace to accommodate around 20,000 jobs along with around one million sq.ft of retail, leisure, entertainment, education and community space.

The project will also create 12 acres of new open space, including a 3.5-acre park, a new Town Square, the first new high street in London for 100 years and 16 new streets.

Chris Grigg, Chief Executive of British Land, said: “We have an incredible opportunity at Canada Water to create a vibrant neighbourhood for people to live, work and enjoy. We’re hugely excited about delivering this exceptional, mixed-use and sustainable landmark development, which has been designed to support people’s wellbeing. We thank the Council for all their hard-work and we look forward to continuing to work with them and the local community.”

The resolution to grant planning permission follows five years of extensive consultation and engagement with the local community and a partnership with Southwark Council, who entered into a conditional Master Development Agreement with British Land last year.

Cllr Peter John, Leader of Southwark Council, said: “We are delighted that this major step towards our vision for Canada Water has been approved. The Masterplan provides the blueprint for an exciting new town centre that will provide thousands of new homes, particularly hundreds of new social rent homes, new jobs and opportunities, new open spaces and a brand new leisure centre for Rotherhithe in the first phase of the work.

"We look forward to working with British Land over the next few years to bring forward the plans and making sure our local residents are the beneficiaries of the opportunities the regeneration will provide, as laid out in the Canada Water Social Regeneration Charter.”

As well as the outline Masterplan, the planning permission also covers the delivery of the first three new buildings in the overall Masterplan. These buildings include 265 new homes, a leisure centre, new public spaces, 330,000 sq. ft. workspace and around 2,300 jobs which could be delivered by 2024.

Building A1 will provide both residential and workspace. Building A2 will be focused on workspace and a new leisure centre, with both buildings providing a small amount of retail at ground floor. K1, the third building will be wholly residential.

Picture: British Land’s Masterplan could to take around 15 years to deliver.