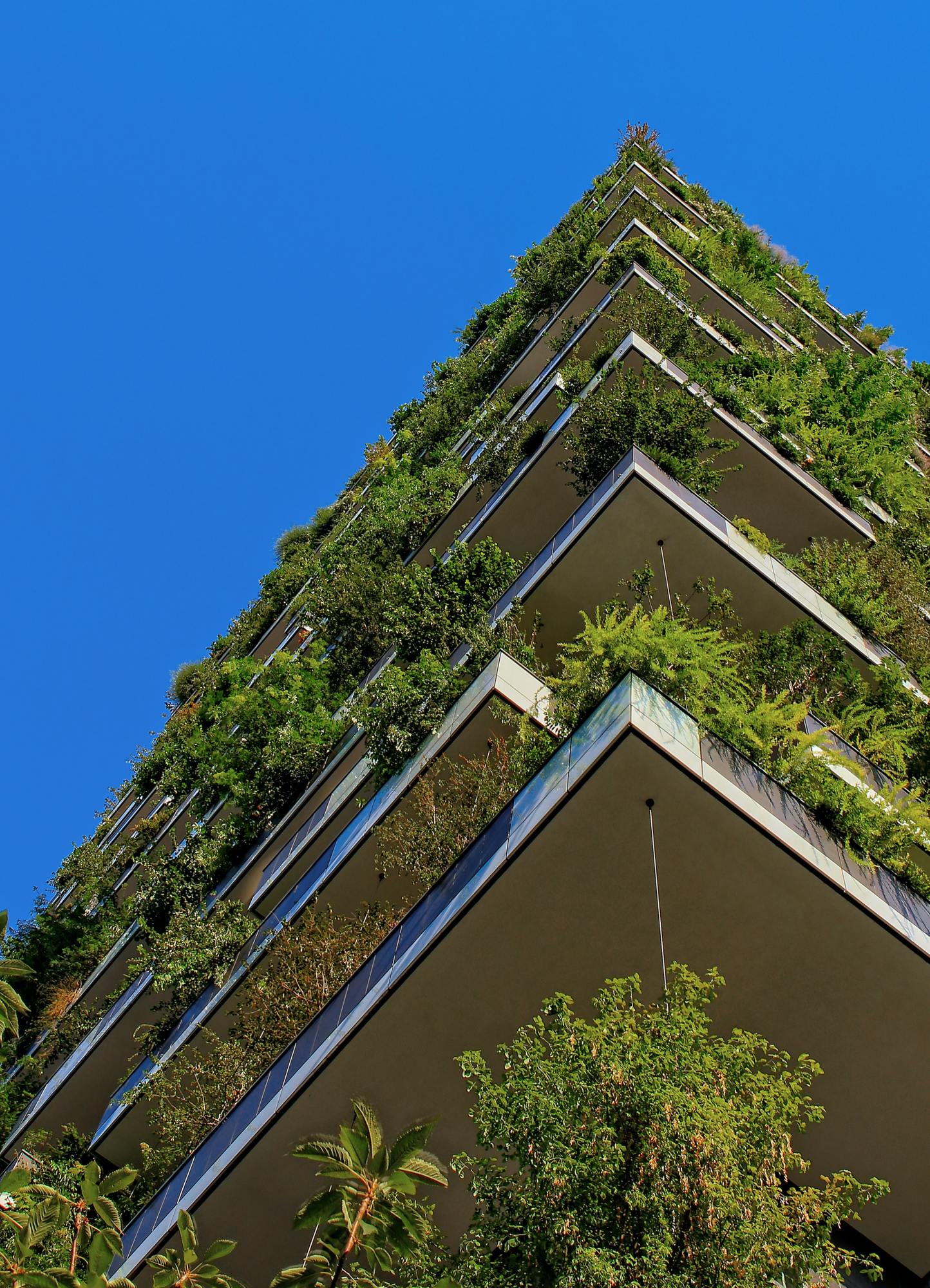 In the 21st century, the separation between nature and human society seems to grow ever further distinct. Despite this, science continues to prove the benefits of the opposite. The concept of biophilic design has become increasingly popular in both spaces of leisure and work due to the well-being benefits, psychologically and even sometimes physically or environmentally.

Whilst at a basic level this is often limited to the arrangement of false greenery, this can extend to the level of renaturing projects, bringing cultivated plant life to city rooftops that offset carbon impact and can even provide crops, as well as perhaps an attractive space for networking and breaks. Commonly this requires a high level of upkeep to keep in with aesthetic standards or limited space – therefore the positive impact is small with installation and maintenance costs high, meaning it could be unappealing to many.

However, is there another option that is higher impact and lower cost?

Urban developments are of course growing at an extreme rate due to the exponentially increasing population, with commercial and residential properties in city sprawls again and again moving past previous boundaries to the countryside. In some of the biggest metropolises, the expanse is so continuously artificial that it causes several problems, such as smog and heat pockets, due to pollution and building materials, as well as climate vulnerability. Combatting this by fulfilling a quota of harmonious living with unsuppressed natural land, even in a scattered and individually placed plan, could become a necessary choice for governments wishing to offset the effects of humans developing acres in the thousands every day.

Rewilding proposals are not without opposition. It rejects the manicured aesthetic of most cities, and can be seen as unkempt if not maintained to such a degree that it would defeat some of the purpose. Yet an opinion poll commissioned by the charity Rewilding Britain shows that 81 per cent of Britons support rewilding, with 40 per cent strongly supportive and just five per cent of people were actually against the idea.

Currently there is little legislation to promote this worldwide, meaning that is a lack of public sector contracts for cultivating this kind of business. The same survey showed 75 per cent want politicians to do more to reverse the decline of nature. Britain has been ranked by the authoritative State of Nature report as one of the most nature-depleted countries in the world, with over half of its species declining and many threatened with extinction. Despite this, there are exceptions, and many places that showcase exemplary buildings or districts.

An ongoing analysis by Rewilding Britain of 33 rewilding projects in England is demonstrating how rewilding can create new jobs. Between them, these sites have seen a 54 per cent increase in full-time equivalent jobs since rewilding began. Jobs across the sites have risen from 173 to 267, and now include education, nature tourism, food and drink production, ecology and events.

A variety of different-sized farms, estates and sites owned or managed by private landowners, charities and public bodies was studied. They include Upcott Grange Farm in Devon, Pirbright Ministry of Defence Ranges in Surrey, RSPB sites at Haweswater and Geltsdale in Cumbria, WWT Steart Marshes in Somerset, and Norfolk’s Wild Ken Hill estate.

The sites cover a combined total of 122,547 acres, of which 75,261 acres are rewilding – mostly on poorly productive or non-agricultural land, showing how rewilding can boost opportunities on marginal land while co-existing alongside farming for food on more productive land. Jobs data was available for 22 of the 23 sites. Across these areas combined, full-time equivalent jobs increased by 47 per cent – from 151 before rewilding began to 222 afterwards, over an average of ten years. The variety of jobs involved also increased significantly, with many of the new jobs focused on nature-based tourism, monitoring, restoration activities, informal recreation, livestock management and education.

So what about the land that is more densely populated? It stands to reason that renaturing and rewilding in more complex and developed would create jobs for the same purposes bar perhaps livestock management, and then some more. In a redevelopment project finished 2014, the Porta Nuova area of Milan has become renowned for the Bosco Veticale.

This translates to Vertical Forest, a prototype building for a new format of architectural biodiversity which focuses not only on human beings but also on the relationship between humans and other living species. Here it consists of two towers that are respectively 80 and 112 metres high, housing a total of 800 trees – 480 first and second stage trees, 300 smaller ones, 15,000 perennials and ground covering plants, plus 5,000 shrubs, providing an amount of vegetation equivalent to 30,000 square metres of woodland and undergrowth, concentrated on 3,000 square metres of urban surface. Unlike “mineral” facades in glass or stone, the plant-based shield does not reflect or magnify the sun’s rays but filters them thereby creating a welcoming internal microclimate without harmful effects on the environment.

These do require planning and upkeep that the “wilder” projects do not. Trees are tethered and pre-tested against winds, and the irrigation system takes continuous checks. Such properties don’t just employ people with window washing skills, but instead specifically trained horticulturists who can also dangle by a rope. This is therefore an extreme end of the spectrum considering the vast quantity of biological matter involved.

Not every building in a city can afford measures this extensive, but city-wide schemes can enable the council to work with commercial and residential areas for an adaptive approach and solution.

The Singapore Green Plan 2030 details a whole-of-nation movement to advance the national agenda on sustainable development. The Green Plan charts ambitious and concrete targets over the next 10 years, strengthening Singapore’s commitments under the UN’s 2030 Sustainable Development Agenda and Paris Agreement, and positioning it to achieve its long-term net-zero emissions aspiration as soon as viable. The Green Plan has five key pillars: City in Nature, Sustainable Living, Energy Reset, Green Economy, and Resilient Future.

The first pillar focuses on renaturing and rewilding, including the development of:

Realising these ambitions ambitious targets alongside the other sustainability goals will require a multi-stakeholder whole-of-nation effort. They claim this will be enabled by a Green Government, with the public sector leading in environmental sustainability, and Green Citizenry, where individuals, communities and businesses play their part.

What Can Property Managers Do?

As illustrated above, FMs and developers have an opportunity to lead the charge and champion corporate social responsibility within a spectrum of investments.

Individual green walls and roofs are an easily manageable option that can suit any scale of property and feature on unused surfaces. They can look good and are in keeping with the modern biophilic office design orientation. The presence of vegetation has a measurable positive effect on mental health, pollution, noise and climate control. On top of this, water retention when this is implemented in co-operation across an area can help water treatment plants avert flooding events. It can even be filtered and repurposed. How could you help turn the tide of concrete?

Beekeeping is an increasingly popular way for city-based businesses to demonstrate their commitment to promoting biodiversity, but as Alison Benjamin...

ESG risk management provider Alcumus has launched a first of its kind, standards-based ESG product solution for businesses. This comes as the UK Chancellor sets new...

Pathway Planning for Green Recovery in 2021

COVID-19 has disrupted organisations for the best part of 2020. Whilst the pandemic is not completely behind us, the focus going forward must be on recovery – using...

As companies reprioritise and restructure, more CSR reporting responsibilities are falling within the facilities team’s remit. But gathering a plethora of...

In order to win government work, organisations must be able to prove how they’ll deliver on social value. As set out in the procurement policy note:...

Coronavirus may have forced businesses to review their social accountability, but has CSR in general taken a backseat throughout the pandemic? Prioritising CSR...