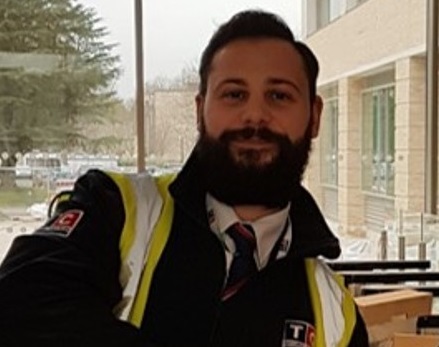 A security guard has received commendations from his bosses for the way he acted when fire broke out at the building he was guarding.

It was the end of a typical day for Paul Roberts, security officer at a large building in Cambridgeshire, where he is part of the team from TC Security Services who provide manned guarding services.

The building is a new complex that is nearing completion and will become home to the 3-4,000 staff who are currently located in a number of buildings.

Roberts was waiting to handover to the officer who was coming on duty at 6:00pm, who was running a little late, so agreed to stay on until they arrived. While he was waiting, one of the team working on the construction came rushing to the reception desk to say there was a fire in the building.

The fire brigade were called to attend. And Roberts' quick thinking led to him contacting the officer who was coming on duty, to ask them to block off the building to prevent anyone entering it.

Roberts and the construction worker worked together to clear the building floor by floor pointing the 30 or so people on site at that time to safety.

Roberts said: "Whilst no two days are the same, I never expected that managing a fire incident might be one of them."

Rachel Donnelly, client contact at the site told Roberts: A huge thank you for the way you handled the situation at site last month. The way you went above and beyond by lending your assistance to clear the building was exemplary. In taking charge and handling the situation in the way you did, you embodied the ‘one-team’ approach we feel is so important to both internal and external staff."

Steve Staple, Operations Support Manger for TC Security Services also made a point of speaking to Roberts. He said: "The way you took charge and handled the situation sets you out as a leader. You are a true asset to the company and I know that the client feels the same way."

Paul Roberts has been a little overwhelmed by all the attention. He said: "I feel that I was just doing the job I’m paid to do.  I job that I really enjoy.  I'm pleased that on this evening in question (mid-January), I was able to put in to practice the training I been given to make a real difference to the people who were on site, keeping everyone safe and getting the firefighters to get the fire extinguished as quickly as possible.

We have news of three London fires - one in a West End office block was spotted by security staff who evacuated 20 people but suffered smoke inhalation themselves. We...

Six fire engines and 35 firefighters and officers from Soho, Chelsea, Euston and Lambeth rushed to reports of smoke issuing from the basement of a hotel on Piccadilly at...