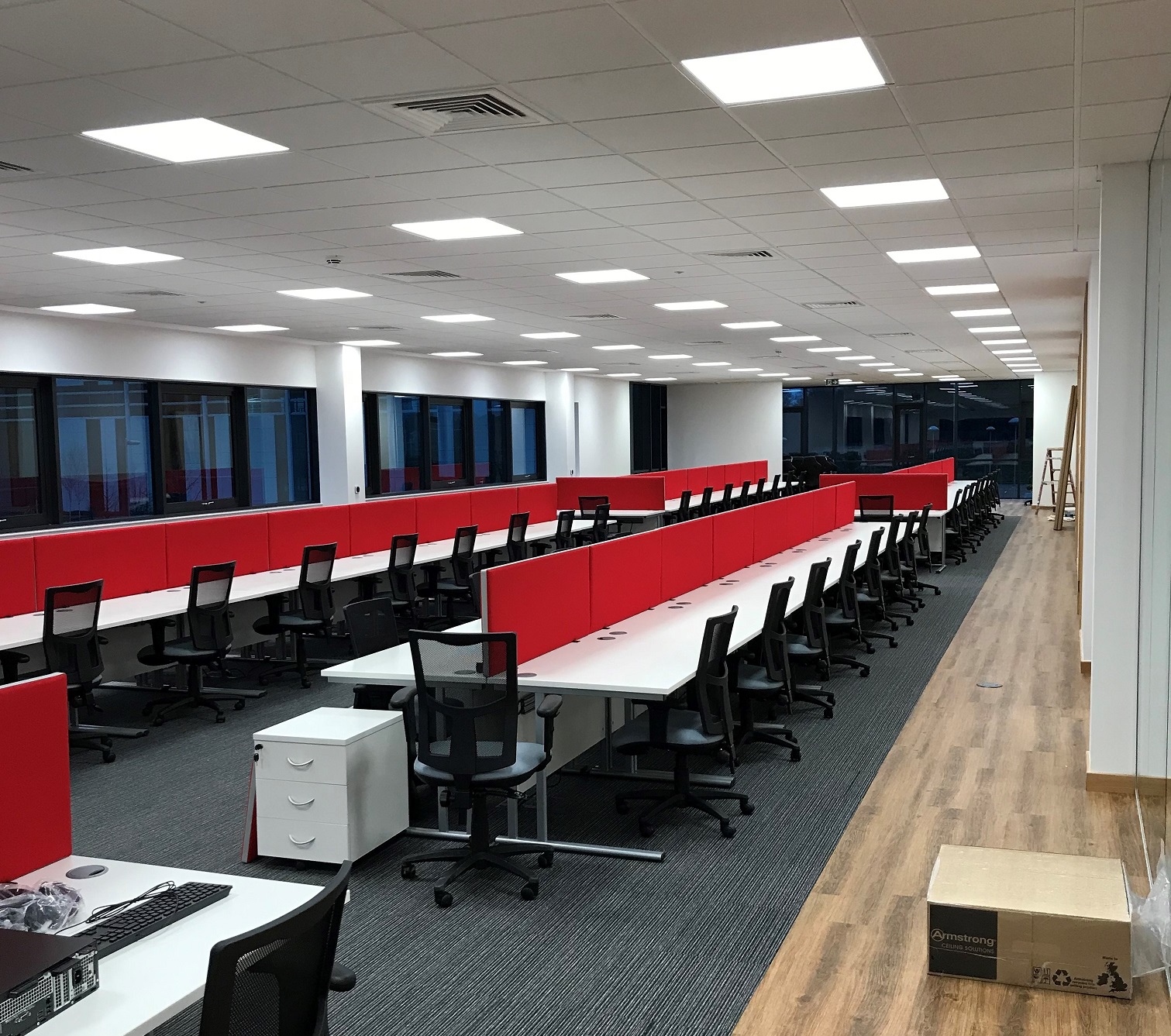 Contractor AKD worked with long-term partners CP Electronics to design and specify the system which is flexible enough to meet changing needs.

The building comprises a mix of open plan areas, meeting rooms, corridors and storage space, with a capacity on the ground floor alone for over 200 workstations. To ensure maximum energy efficiency, each floor is divided into smaller clusters, typically with either 4, 6, 10 or 12 workstations. Throughout Maxim 10 is a lighting control system that ensures lights are only ever in use when a person is present.

“This was a challenging project,” said Brian Hedley, Area Sales Manager of CP Electronics. “The building was due to be handed over in just 12 months’ time when we started, so the clock was ticking. To meet the project timeline and energy efficiency specification, we used our Vitesse Modular lighting control system. It’s a flexible and easy to use solution which enables a variety of configurations.”

By combining 2-way and 4-way starter and extender modules, CP’s Vitesse Modular system enables all lighting needs to be met with a simple plug and play solution. Once in place, it was simply a question of plugging in the luminaires and necessary PIR detection systems into the lighting control modules (LCMs).

To ensure maximum detection and reach at optimal cost, two types of PIR were used. In the larger areas, mid-range PIRs gave 16m by 6m coverage, while in smaller spaces including storage cupboards, the standard PIRs provided a detection pattern of 7m. Lights were programmed to timeout after 20 minutes, keeping energy usage to a minimum.

In total, the building uses 144 starter modules, split between 2-way and 4-way variations, along with 167 extension modules and 144 PIRs. In addition, just over 1,000 of CP Electronics’ pre-wired luminaire leads were used to save even more time during installation.

From start to finish, the lighting controls part of the project took just nine months. Design and specification began in June 2018 and was completed by mid-August. Installation for the ground floor took six weeks, with just a month needed for each of the other three floors. Initial lighting was completed by December 2018, well in time for the handover by March 2019.

While the plug-and-play system undoubtedly helped accelerate installation, another important factor came during the commissioning phase. With each floor similar in layout and Vitesse Modular LCMs used throughout, CP Electronics only needed to commission the ground floor.

After that, AKD were able to commission the further three floors by themselves. This was made possible with a pre-programmed handset which sets timeout with a simple push of a button.

“From start to finish it’s been pretty much a seamless and trouble-free project,” explained Keith Groom, MD at AKD. “I’ve been impressed again with the simplicity of everything – including the product selection and ease of installation. Most importantly the end client is suitably impressed with the ease of operation and pleased with the knowledge that the building is as energy efficient as possible."

Picture: A modular lighting system has been installed at Maxim 10 on the Maxim Office Park.

Daylight-starved office workers crave better lighting in the darkest working weeks of the year. But with sunrise at 8:01am on December 21st 2018 and sunset at 3:52pm...

Legal Highs - Making The Case For AI And Agility

89% of law firms are already utilising Artificial Intelligence or have imminent plans to do so; and 61% of firms have adopted an agile working policy; while 98% of legal...

How Do You Feel About Remote Working?

In 2019, a joint-research project from Gensler and the British Council of Offices (BCO) on the rise of flexible workspace in the UK corporate sector discovered that that...