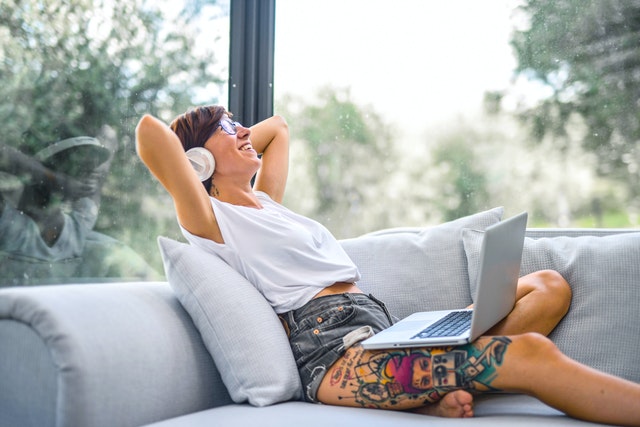 A new survey of 1,000 UK office workers has revealed that 54 per cent are happy to continue working from home for as long as necessary.

Heading back to the office in the future, 11 per cent say they will miss their view, wearing their pyjamas (11 per cent) and their slippers (12 per cent).

47 Per Cent Returned to Work Part-Time

In accordance with the revised government guidance, many UK workers have packed up their desks and headed back home.

The research carried out by Moneypenny, the outsourced communication provider, states that after the relaxing of the original COVID-19 measures, 70 per cent of the UK workforce headed back to the office, 47 per cent of those on a full-time basis.

Furthermore, 47 per cent returned on a part-time basis, splitting their time between working from home and the office. 6 per cent of workers were also introduced to staggered hours.

Now, with COVID-19 infection rate rising, workers have been advised to work from home wherever possible.

37 per cent of those originally returned to the office, have now reverted to working from home once more.

When looking at the regional data, 57 per cent of office workers in the South East have now returned to working from home. Yorkshire saw the lowest occurrence of this activity with 26%.

Furthermore, 42 per cent of Yorkshire workers stated they were awaiting preparations allowing them to return to working from home.

On the whole, 21 per cent of workers have stated they will continue to work in the office.

Those in the North East (30 per cent) and East Midlands (31 per cent) revealed that they too were staying put in the office environment.

Back in August, research from the BBC showed that fifty of the biggest UK employers have no plans to return all staff to the office full-time in the near future Questioning 50 employers ranging from banks to retailers to ask about their future working plans, owing to tiered lockdown restrictions, this trend shows no signs of slowing.

With over half of the UK stating they are happy to continue to work from home, the survey shows why working from home is the more preferable option for many.

On the whole, the findings revealed that 59 per cent enjoy not spending time and money on the commute.

Secondly, being able to dress in casual clothes was another popular aspect of not working in an office (52 per cent). 26 per cent stated that not having to wear make-up was another advantage of working from home.

The freedom to decide when breaks were taken was another favourable choice with respondents, 42 per cent stated this was the best aspect of working from home.

Personal factors, such as more time to spend with a partner or children (31 per cent) or more time spent with pets (26 per cent) were also popular choices amongst respondents.

Picture: a graphic showing the top five things that UK office workers enjoy about working from home: being able to run errands, sleeping in later, choice over when you have breaks, wearing casual clothes and no commute.

On the other hand, there were some elements of the office that workers missed.

10 per cent of UK office workers found working from home to be difficult, 14 per cent confessed to being less productive without an “office routine”.

22 Per Cent Would Take Their Dog Back to the Office

35 per cent in the future, would like a comfortable dress code. Furthermore, 11 per cent would like to continue wearing their pyjamas and 12 per cent slippers.

In addition, office workers gardens and views would be also missed. 20 per cent say they will miss the garden, and 11 per cent of workers wish to take their view with them upon return to the office.

However, 19 per cent said they would not take anything back to the office from their working from home routine.

Picture: a photograph of a person working on a laptop, wearing headphones, sitting on a sofa

Research from the BBC shows that fifty of the biggest UK employers have no plans to return all staff to the office full-time in the near future. The BBC questioned 50...

Despite 2020’s working from home revolution, five of the biggest tech giants are still demonstrating confidence in their physical office space. Recent research...

Unused office space after coronavirus could prove costly for companies, as research predicts over 70 per cent of all office rent paid by businesses in London will be...

Leesman has presented the key highlights of their latest data exploration into home working and employee experience. The workplace experience assessment benchmark...

With more companies keen to keep office occupancy to a minimum, Stephen Roberts from CMD Ltd discusses how companies need to equip their teams to make working from home a...

In response to the increase in home working in the UK, inspections of home offices are being carried out to help companies follow through on their duty of...

Research by IWFM shows that many UK employees are concerned about the health implications of returning to offices post-lockdown. The YouGov poll of 404 office staff...