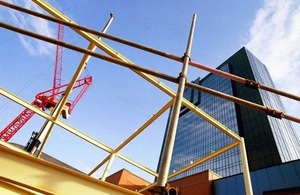 It acknowledged that growth was held back by weakness in exports but manufacturers continued to be optimistic over prospects for the next 12 months.

“We have now seen 10 quarters of sustained growth reported by construction product manufacturers, led by demand from the private housing, industrial and infrastructure sectors,” explained Rebecca Larkin, Economist, CPA. “As firms increase production, a growing proportion of manufacturers reported operating at 90% capacity or above in Q3. In response, manufacturers reported increased investment in plant and equipment as well as their labour force. A further increase in investment and hiring intentions for the next 12 months signals widespread confidence over the longer term outlook.”

Picture:   Prospects are still looking good in the UK construction sector according to the CPA.