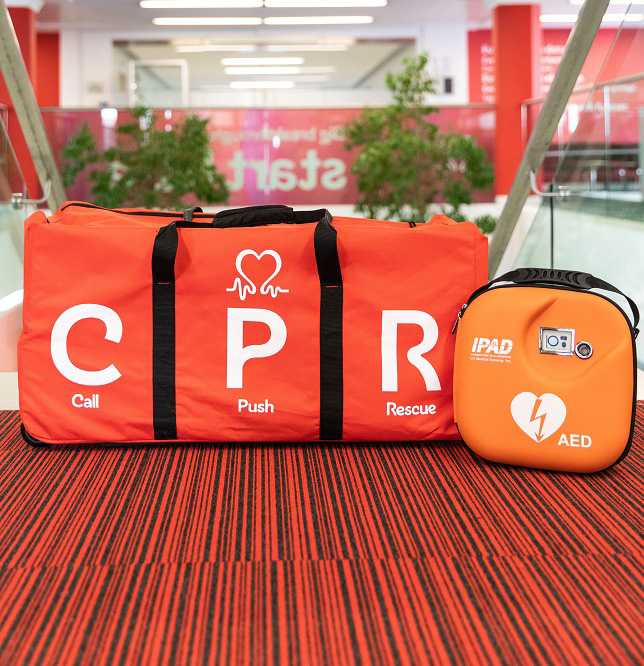 Nearly a third of UK adults are not likely to perform CPR if they saw someone suffer a cardiac arrest, according to researchers from the University of Warwick Out of Hospital Cardiac Arrest Outcome Registry team, who worked with YouGov to survey over 4,000 UK adults.

Participants were asked questions about their knowledge of CPR, and whether they would feel confident in performing it on someone who had had a cardiac arrest.

These figures show that lives are still being put at risk every day because not enough people know how to perform CPR.

Last week's Restart a Heart Day raised awareness of the importance of CPR, which saw over 200,000 people trained in life saving CPR across the UK,. The campaign is  run by British Heart Foundation in partnership with the Resuscitation Council (UK), St John Ambulance, the British Red Cross, Yorkshire Ambulance Service, Greater Manchester Fire and Rescue Service and ambulance trusts and fire and rescue services across the country.

The UK campaign, which is now in its 5th year, was launched after figures revealed that less than 1 in 10 people in Britain survive an out of hospital  cardiac arrest, due to low bystander CPR rates. In countries where CPR is taught in schools, as many as 1 in 4 survive.

The Government has recently announced plans to add CPR, defibrillator awareness and other lifesaving first aid skills to the national curriculum in secondary schools in England, as part of a push to save lives and improve cardiac arrest survival rates.

Commenting on these plans, Education Secretary Damian Hinds said: "Knowing how to save someone's life is one of the most powerful skills you can learn. That's why we plan to teach first aid ‎as part of health education, which we intend to make compulsory in all state funded schools from 2020. I look forward to working with experts, including ‎the British Heart Foundation, as we compile teacher materials for health education‎. This change will mean pupils learn how to be safe and healthy. It's never too late to‎ learn how to be a lifesaver and I'd encourage people of all ages to learn first aid."

Progress has been made

Although 96% of those asked said they were likely to call an ambulance if they saw someone had collapsed and had stopped breathing, the time it takes for the emergency services to arrive can mean the difference between life and death. Brain tissue starts to die within 3 minutes after the heart stops, due to a lack of oxygen. Early CPR can more than double a person’s chances of survival, and can buy the time needed before paramedics arrive and provide care.

Research recently presented at the European Resuscitation Council (ERC) Conference suggests that campaigns like Restart a Heart Day are having an impact, with the data showing rates of bystander CPR increased by over 10% between 2013 and 2017.

Commenting on public confidence in CPR, BHF Chief Executive, Simon Gillespie said: “You may not feel confident performing CPR if you haven’t been trained or you don’t remember your training but without your early action the chances someone will survive a cardiac arrest are virtually zero. The BHF is striving to improve survival rates by creating a Nation of Lifesavers through our CPR training programmes.”

Dr Matt Kearney, National Clinical Director for Cardiovascular Disease Prevention at NHS England, said: “When someone suffers a cardiac arrest their chances of survival increase dramatically if CPR is started immediately. Raising awareness and providing more people with the confidence and training they need is key and will save more lives.”

Get involved and learn CPR

Donations In The Bag For British Heart Foundation

TC Facilities Management staff all over the country have been encouraged to fill bags with unwanted items - which can be sold in BHF stores to raise funds for...

Every day, 150 people in the UK die from out-of-hospital cardiac arrest. The makers of the world’s first personal defibrillator are on a mission to reduce that...

A massive fire overnight at commercial premises in Ardwick in Manchester has seen four fire engines out of the original twelve still at the scene along with an aerial...

A Welcome In The Valleys As Kier Results Buck The Trend

Kier's key facilities management contract awards, worth £65 million, have underpinned the group's half-year results - unlike some more notable of its...

Get A Move On

Graham Bird explains why workplace exercise can be of benefit to both employee and employer. Earlier this year, the British Heart Foundation announced that more than...