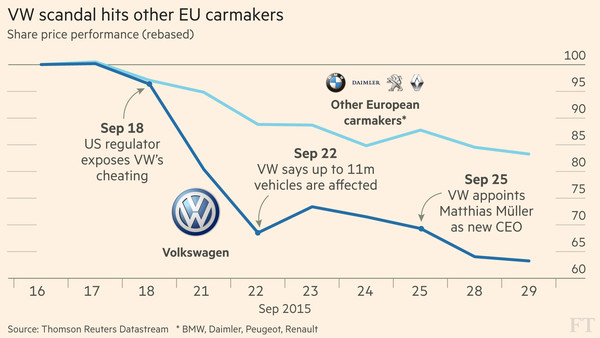 The ramifications for the car industry over the Volkswagen emissions scandal are serious on the manufacturer and far beyond.

At the time of going to press the former VW CEO, Martin Winterkorn, is under criminal investigation by German authorities and it is certain that a number below him will follow as Volkswagen tries to cope with revelations that other parts of the Group – Audi, Seat and Skoda – are also involved.

“Those people who allowed this to happen, or who made the decision to install this software – they acted criminally and they must take personal responsibility,” said Olaf Lies, a Volkswagen board member and economy minister of Lower Saxony, talking to the BBC. “We only found out about the problems in the last board meeting, shortly before the media did.”

Already HMRC and the insurance industry are muttering about the possible impact on tax and policies that will have many flinching.

The practical implications for fleet operators in the UK offering Volkswagen diesel fuelled vehicles could also be enormous.

More than 300 fleet decision makers in the UK took part in the survey and 68% of them believe cars in the UK will be affected and a large number (61%) will expect reimbursement for any resulting recalls in the UK.

“Fleet operators have a right to ask serious questions of manufacturers when news like this emerges,” said Simon Staplehurst, Head of Commercial Insight, Sewells Research. “Fleet managers make critical business purchasing decisions on manufacturer claims when it comes to fleets and trust is the bedrock of these relationships and choices.”

As our graph shows, other car manufacturers are being sucked into the DieselGate mire.

Picture:    A car crash for all – the share price for non-VW manufacturers has taken a hit too.

The sight of Japanese senior managers at Mitsubishi bowing at a press conference to apologise for what appears to be deliberate falsifying of test performances of two of...

Getting to Grips with Cheating Debacle

In its most recent statement on the emissions scandal that first broke in the USA, VW has declared it is ‘making progress’ on all five of the priorities it...

The latest set of figures from Volkswagen is pointing to the setting aside of a huge chunk of money to cover likely legal and regulatory consequences of the emissions...

Bolshie Boris Backs Down From His B-word Rant

In July this year, the Mayor of London said in a tweet, it was 'bollocks' to suggest that Oxford Street had one of the worst air pollution rates in the world,...