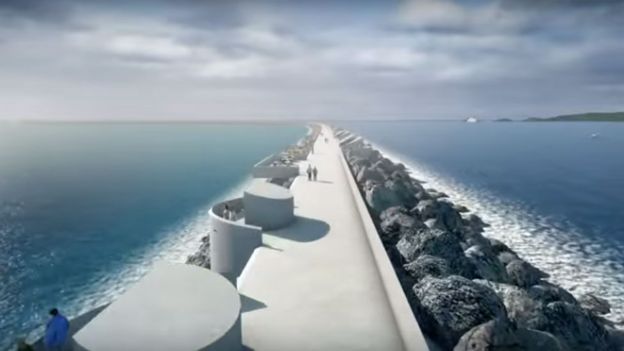 Tidal Power Lagoons - and particularly the Swansea Bay scheme - will not provide value for tax payers' money the Business, Energy & Industrial Strategy Minister, Greg Clark has told Parliament as he refused a further cash injection. (A similar Cardiff proposal, with private funding, may get the nod though.)

The Secretary of State for Wales, Alun Cairns MP, has backed Clark up despite championing the scheme right up until the beginning of the week ending June 29.

Those in favour of the project, including major investors, have been left feeling blue at the decision - especially as they claim, the power produced would have been cheaper than that from Hinckley C and would have given Britain a leading spot from which to gain - and export - expertise.

Alun Cairns said: "I realise the disappointment this decision may cause but ultimately this project did not meet the threshold for taxpayer value.

"The reality is the consumer and industry would have been paying disproportionately high prices for electricity when cheaper alternatives are available. I was an early and consistent supporter of the scheme – and took it to Number 10 – but after months of hard work by officials - the conclusion when taking a responsible approach to taxpayers money - is it just did not stack up."

Cairns continued: "It’s important to stress that the issue here is specifically with the tidal lagoon application, not the concept of marine energy itself. The Office of the Secretary of State for Wales and wider Government is committed to renewable energy and we will remain open to different sources of that. However, the priority always has to be that renewable energy represents good value for the Welsh consumer.”

Greg Clark told Parliament: "Britain’s energy policy towards electricity generation is based on meeting 3 needs - ensuring that we can count on secure and dependable supplies of electricity at all times; minimising the cost of supplies to consumers and taxpayers; and meeting our greenhouse gas emission reduction obligations.

"Renewable electricity now makes up almost 30% of our generation. The policy related costs have been growing. We have made a clear commitment to bear down on costs. It is in this context that the government has assessed whether it should commit consumer or taxpayer funds to the programme of 6 tidal lagoons proposed by Tidal Lagoon Power Limited, the first being the proposed project at Swansea.

"The conclusion of this analysis – which has been shared with the Welsh Government – is that the project and proposed programme of lagoons do not meet the requirements for value for money and so it would not be appropriate to lead the company to believe that public funds can be justified.

"The proposal for the Swansea tidal lagoon would cost £1.3 billion to build. If successful to its maximum ambition, it would provide around 0.15% of the electricity we use each year. The same power generated by the lagoon, over 60 years, for £1.3 billion, would cost around £400 million for offshore wind even at today’s prices, which have fallen rapidly, and we expect to be cheaper still in future."

Despite objections to the figures by the pro-lagoon lobby, the government claims at £1.3 billion, the capital cost per unit of electricity generated each year would be 3 times that of the Hinkley Point C nuclear power station.

(Cairns had asked the government to commit to a contract on the same terms as that offered to Hinkley Point C.)

Clark also compared tidal power to off-shore wind generation: "Taking all the costs together, I have been advised by analysts that, by 2050, the proposal that has been made – which would generate around 30 TWh per year of electricity - could cost up to £20 billion more to produce compared to generating that same electricity through a mix of offshore wind and nuclear, once financing, operating and system costs have been taken into account."

Clark continued: "However, in recognition of the potential local economic benefits that might result from a lagoon in Swansea, I asked officials to go back and consider what additional benefit could be ascribed to a number of other factors, including a beneficial impact on the local economy.

"A Swansea lagoon would support only 28 jobs directly associated with operating and maintaining the lagoon in the long term."

Officials were also asked to make an assessment of the potential for valuable innovation and cost reductions for later lagoons that might come from embarking on a programme of construction.

Independent advice concluded that the civil engineering used in Swansea Bay offers limited scope for innovation and capital cost reduction – estimated at 5% - in the construction of subsequent facilities.

Located between Cardiff and Newport, a tidal power lagoon would be the first UKI full-scale plant - made possible by the consented pathfinder project at Swansea Bay. It would also be the UK’s largest renewable energy project, capable of powering every home in Wales.

Already 3 years into preliminary environmental and engineering studies, a full application for Development Consent for Cardiff Tidal Lagoon is anticipated in 2019.

In the Hendry Review (which also helped Greg Clark put the mockers on Swansea), Cardiff Tidal Lagoon will be expected to generate among the cheapest electricity of all new power stations built in the UK.

The offer from the National Grid to connect the 3,240MW capacity lagoon came in 2017. At the time, Tidal Lagoon Power’s chief executive, Mark Shorrock, said: “Our offer to the UK Government is to contract Swansea Bay Tidal Lagoon for a lower subsidy per megawatt hour than Hinkley Point C.  While we await the Government’s response to this offer and to the independent Hendry Review of tidal lagoons, we have continued our development work on the subsequent programme and have secured the grid connection for a tidal power station equal in installed capacity to Hinkley Point C.  Looking at the pounds per megawatt hour unit cost of new build power stations, nuclear is currently priced in the nineties, the latest offshore wind projects are expected to drop into the seventies and our models show Cardiff Tidal Lagoon beating them all in the sixties.

“What’s more the supply chain contracts awarded for Cardiff Tidal Lagoon will be worth more than £6 billion to UK companies.”

The Hendry Review, an independent report to Government by former Conservative energy minister Charles Hendry, had concluded that the Cardiff Tidal Lagoon could generate power that is 'less expensive than offshore wind and significantly less expensive than nuclear'.  It found that contracting Cardiff Tidal Lagoon’s 5,500GWh annual output added less than 50p on average to annual household electricity bills, versus £2.39 for a 5,500GWh portion of Hinkley Point C’s contracted annual output.

The Review concluded that large scale tidal lagoons could be built in the UK at a cost of £65 per MWh to £85 per MWh, which is cheaper than new nuclear and comparable to where UK offshore wind projects are expected to come in.  It agreed that as a first step, the UK should proceed ‘as soon as is reasonably practicable’ with the consented pathfinder tidal lagoon at Swansea Bay.

Investec Bank’s Jeremy Ellis said back in 2017:  “In our experience and given their sustainable long-term return characteristics, there is likely to be investor demand for both project and development equity of tidal lagoons once there is clarity regarding government support for the pathfinder then a portfolio of full scale tidal lagoons. This grid offer enhances Cardiff’s reputation as a standout full scale tidal lagoon project.”

Tidal lagoons can provide the grid with entirely predictable, year round, zero carbon electricity at scale.  If it were still to go ahead, supporters say the Cardiff Tidal Lagoon will generate enough electricity each year to power every home in Wales, for the next 120 years.

Phil Sheppard, National Grid’s Director of UK System Operator, said: “Tidal power presents a reliable and predictable source of renewable generation that has the potential for highly flexible operation in the future. We have worked alongside tidal lagoon developers to gain an understanding of the operational characteristics of the proposed lagoons. This infrastructure project will have a significant impact as we move towards an increasingly low carbon electricity network.”

The BBC reported on June 26 that £2.5m of taxpayers' money was loaned to companies behind the snubbed Swansea Bay Tidal Lagoon project. Now there are questions whether it can be recovered.

Charles Hendry, who supported the lagoon in his review, said the UK government could have made its decision 18 months ago.

Picture: An artist's impression of how the Swansea tidal lagoon may have looked and the still proposed siting for the Cardiff project.

Bytes And Mortar - A Digital And Off-site Construction Revolution

An ambitious new partnership between the government and the construction industry has been revealed. With almost half of the economy reliant on the built environment...