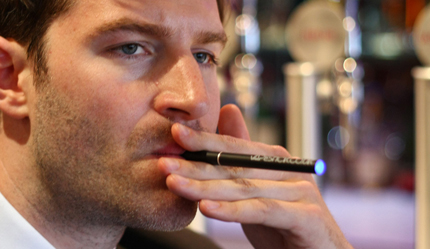 The decision by the Welsh government that it intends to ban next year the use of e-cigarettes in enclosed public spaces and workplaces, has been criticised by groups not normally in the same camp.

In his statement last week, Welsh Health Minister, Mark Drakeford emphasised the need to take pre-emptive measures, rather than wait for evidence to build up on health issues around e-cigarettes. “This is not an area in which you should wait for proof that harm has conclusively happened,” he argued. “We need to take action now to prevent the possibility of harm.” If the ban goes ahead, Wales will become the first part of the UK to impose a blanket ban.

Cancer UK was among organisations critical of the announcement. It has kept to the view that on balance the use of e-cigarettes was of benefit to those trying to give up tobacco smoking. In a submission last year to the Welsh consultation process on the issue, it made clear that:

‘Electronic cigarettes (e-cigarettes) are almost certainly much safer [our italics] than tobacco cigarettes and may help smokers to cut down or quit smoking. Cancer Research UK support the use of high quality e-cigarettes because we believe that they have significant potential to help smokers who aren’t otherwise ready or able to quit smoking by providing them with much safer alternatives to smoked tobacco.

We believe that any expansion of the smoke-free legislation should be based on peer-reviewed evidence. Currently there is insufficient evidence to introduce a ban on the use of e-cigarettes in enclosed public spaces or workspaces. We recognise that the growth of e-cigarette use may present some challenges for individual businesses and organisations. However, so far there remains very little evidence of systematic problems around the enforcement of the current ban which has high compliance rates.’

Cancer UK went on to refute the allegations that e-smoking would encourage others, especially young people, to copy the habit and pointed to studies that found no evidence of this occurring. Its concern was supported by Professor John Britton, Director of the UK Centre for Tobacco & Alcohol Studies at the University of Nottingham’s Faculty of Medicine and Health Sciences, who expressed doubts over the proposed ban on the grounds of people’s health. “E-cigarettes are important to very many people and we need to think carefully before removing that option,” he stated.

In this respect, the arguments argued by Cancer UK and Professor Britton were very similar to the pro-smoking organisation, FOREST.

Currently e-cigarette ‘vaping’ has been banned in a number of very well known public spaces in Wales, including Cardiff Central Station, Wales Millennium Centre and University Hospital of Wales, Cardiff. Hospitals across the UK have been at the forefront of bans on their premises, both for visitors and staff.

An increasing number of railway companies have imposed bans on trains and stations. The latest is Southern Rail which announced that following its joining the Govia Thameslink franchise: ‘From Sunday 26 July, e-cigarettes will no longer be permitted on Southern and Gatwick Express trains, nor at Southern stations.’

When it introduced its ban in 2013, Greater Anglia believed it was doing so to defend those passengers that would be irritated by e-smoking. ‘In common with other train operators we have recently taken the decision to include cigarettes in the smoking ban on our trains and stations,’ the statement read. ‘This decision is in line with the BMA’s recommendation that e-cigarettes should be included in the ban on smoking in public places.’

There must have been some bewilderment when the critical response came, not from FOREST or e-cigarette manufacturers but from anti-smoking charity, ASH. Amanda Standford, spokeswoman, stated the ban was “unhelpful” and that it could result in those wishing to give up the ‘weed’ with no alternative to break the habit.

Picture: Wales might become the first part of the UK to impose a blanket ban on e-cigarette use in enclosed public spaces but its government has been criticised by Cancer UK