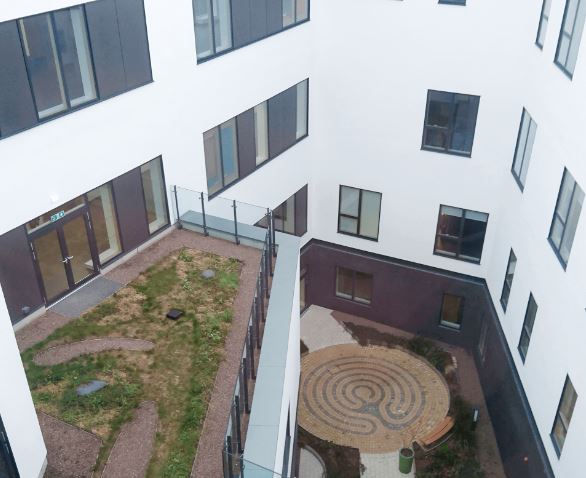 The Scottish Government has confirmed that a public inquiry will be held to examine health and building issues at two hospitals. Meanwhile, 'higher than normal' cases of  Legionnaires Disease have occurred in the Vale of Glamorgan.

One of the hospitals at the centre of the inquiry saw two patients die earlier this year after inhaling fungus spores.

The inquiry in Scotland will determine how vital issues relating to ventilation and other key building systems occurred and what steps can be taken to prevent this being repeated in future projects.

The inquiry will focus on the new Royal Hospital for Children and Young People (RHCYP) and the Queen Elizabeth University Hospital (QEUH) sites after concerns were raised by affected parents over safety and wellbeing.

Nine cases of Legionnaires Disease have been extensively investigated by Public Health Wales. The body says there is no evidence that any of these cases are linked and most have individual risk factors for acquiring their infection, including some with travel abroad. Advice has been issued - see below.

Health Secretary Jeane Freeman said on September 17: “The safety and well-being of all patients and their families is my top priority and should be the primary consideration in all NHS construction projects. I want to make sure this is the case for all future projects, which is why, following calls from affected parents, I am announcing a public inquiry to examine the new Royal Hospital for Children and Young People and the Queen Elizabeth University Hospital sites.

“The recent KPMG and NSS reports into the new Edinburgh Children’s Hospital will provide a significant amount of the underpinning evidence for the inquiry alongside the ongoing independent review into the delivery and maintenance of the QEUH."

On 4 July 2019 the opening of the RHCYP was postponed (it was due to open 5 days later) because of issues identified with the air ventilation system at the hospital. The Health Secretary took the decision after final safety checks revealed that the ventilation system within the critical care areas (intensive care, high dependency and cancer departments) of the hospital required further work in order to meet national standards.

Water supply and drainage also caused concerns as to the standard of the build of the hospital. Both systems being deemed not to have achieved national standards.

An independent assessment by KPMG was published on September 11. The focus of the review has been to establish what decisions were made by NHS Lothian in relation to the air ventilation issues and the other material issues that led to the hospital not opening. The estimated cost of producing this report is £400,000.

An Independent Review of the Queen Elizabeth University Hospital is being undertaken this autumn and has recently appointed two expert advisors on infection prevention and control to join Professor Billy Hare, expert on construction design and Deputy Director of the BEAM Research Centre at Glasgow Caledonian University, who was appointed to the Review team in June.

Two patients (who were being treated for cancer) at QEUH died after they were infected by a fungus normally found in bird droppings. Again there are suspicions that the air handling system at the hospital has not been configured properly.

The company behind the building of the 278 metres tall office tower 22 Bishopsgate, Multiplex, is also the company responsible for the design and build of both hospitals. No comment has become available from the company.

Legionnaires' Disease in the Vale Of Glamorgan

Employers and members of the public are being reminded of the steps they can take to minimise the risk of Legionnaires’ disease as Public Health Wales and partner agencies investigate a higher than usual number of cases that have presented in the Vale of Glamorgan over the last ten months.

Nine cases have been extensively investigated. There is no evidence that any of these cases are linked, and most have individual risk factors for acquiring their infection, including some with travel abroad.

However, as a precautionary measure Public Health Wales (PHW) and partner agencies advised employers to check their Legionella policies and practices earlier this year (as the summer beckoned when Legionnaires’ disease is often more common) to ensure they were compliant.

PHW advised members of the public they could reduce the risk of Legionnaires’ disease by regularly flushing through or removing unused taps and shower heads, draining water bowsers and garden hoses if not in use, and using commercial screen washes in their vehicles.

Dr Gwen Lowe, Consultant in Communicable Disease Control for Public Health Wales, said at the time: “Legionnaires’ disease is a rare but potentially life threatening illness.  People become infected when they inhale Legionella bacteria which are spread through the air in the form of vapours or droplets from a contaminated water source. Legionnaires’ disease cannot be passed from person to person.

“Most cases of Legionnaires’ disease notified to us are sporadic cases, but unexplained clustering does occur from time to time. With our Local Authority partners, we investigate every case in detail when it is notified and at the same time we look for any potential links to other cases in the area. If possible, we also send samples from those affected for typing. The results of samples we have received so far are different, suggesting the typed cases are not linked.

“On average, there are around 30 cases of Legionnaires’ disease in Wales each year. We are closely monitoring this situation.”

Picture:  Inside The Royal Hospital for Children and Young People.

JCA Engineering has secured a five-year maintenance contract to deliver hard FM services to the Chelsea and Westminster Hospital. Following a competitive tender...