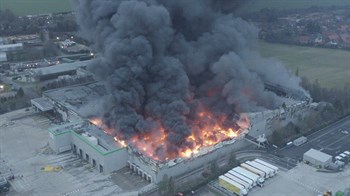 The Ocado Group PLC released its interim half year results on July 10 showing that the cost of the fire at its robot controlled warehouse in Andover cost the business over £100 million - most of which was insured but the company is still waiting on payouts.

The fire took out 10 per cent of Ocado's capacity. Although the company had contingency plans in place to mitigate problems in service delivery, a commitment to  Morrison Supermarkets was compromised and a deal with Marks & Spencer faltered briefly.

Ocado has since dropped working with Morrisons and formed a JV with M&S and reinvented itself as a technology solutions provider - it will sell its systems to other retailers and other industries.

8 February 2019 saw Hampshire Fire and Rescue Service extinguish the blaze and hand the site back to the owners after what was described as a 'complex incident requiring additional support from the Local Resilience Forum and multi-agency partners to minimise the disruption to nearby businesses and residents. Fire teams from Oxfordshire, Dorset & Wiltshire, Royal Berkshire and Hertfordshire were called in.

Ocado has received about £43 million from their insurers so far. The fire cost the company about 2 per cent of its sales. Half-year results show the company made a loss of nearly £143 million - some of those losses will be recovered as further insurance claims are paid.

The Andover facility is to be rebuilt, whilst Ocado is also in the initial construction phase of another robotic warehouse in Essex.

Ocado Groups' half-year report says trading was in line with expectations with results impacted by the Andover fire.

The company experienced a 9.7% Retail Revenue growth with the impact of the Andover fire estimated at 2% of sales in the half.

Group EBITDA of £18.7 million reflects the combined impacts of the Andover fire and IFRS 15 delaying the recognition of fees from internal solutions partners as revenue and the cost of share schemes.

£98.5 million of exceptionals reflects the net cost associated with the write-down of Andover CFC and associated assets, comprising £110.3 million of costs, offset by £11.8 million in insurance proceeds recognised in exceptionals to date.

Tim Steiner, Chief Executive Officer of Ocado, said: "In the last six months the centre of gravity at Ocado Group has shifted. We are beginning to apply our technology skills and expertise to other related activities. The innovation factory we have created is founded on a near twenty-year heritage of constant re-examination of the technology to provide the best customer experience.

"Although the Andover fire removed 10% of our capacity, its impact was estimated at 2% of sales in the half. The total of insurance cash receipts in the first half was £43 million, net of fees, of which we recognised £12 million income in exceptionals.

"CFC3 in Andover is being rebuilt with a new state of the art facility expected to go live in late 2021/early 2022. CFC4 capacity increased by more than 50% in the period and construction for CFC5, in Purfleet, will also commence soon.

"The true impact on Group EBITDA from the Andover-related business disruption will be £15 million with £8 million related to reduced fees available to the solutions business.

"The balance on the retail sales lost due to the Andover fire is expected to be covered by insurance that will provide a full indemnity for the business disruption experienced over the next few years, including lost sales and cost inefficiencies, with the income, when recognised, as exceptional."

Picture: The fire at Ocado's mostly robot operated warehouse in Andover, Hampshire cost the company £110 million - a great deal of which the company is still trying to recover from insurers.

The appetite for real estate investment among global institutions has reached a seven-year high, research by  Hodes Weill & Associates and Cornell University has...

Commercial contract cleaning provider Ecocleen, is targeting a number of acquisitions over the next 12 months to accelerate its expansion within the UK. The company...