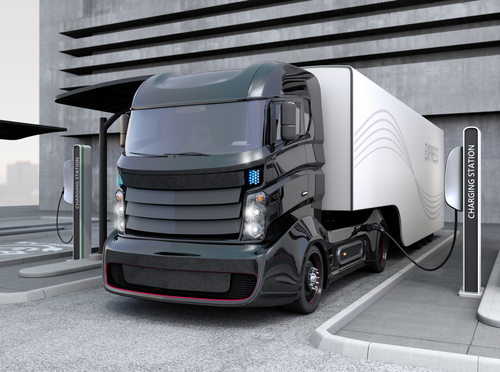 Just days into his presidency, Biden announced the intention to replace the federal government’s fleet of combustion engine vehicles with electric vehicles manufactured in the US.

This will reportedly create a million clean-energy automotive jobs, in what he described as the “largest mobilization of public investment in procurement, infrastructure and R&D since World War Two”.

Biden also pledges to convert all US school buses to electric by 2030, around 500,000 vehicles. There are also plans for a national network of 500,000 EV chargers.

The electric truck market in the US is primed for huge growth. Having largely lagged behind China and Europe in electric commercial vehicle deployment, the transition to zero-emission vehicles in this sector now seems set to begin in earnest.

According to the U.S. General Services Administration (GSA), the US federal fleet comprises near 650,000 vehicles with around 100,000 medium-duty and 40,000 heavy-duty trucks in the inventory.

Whilst the strategy, funding, and timelines behind the policy are yet to be expounded upon, it is clear that the new government sees vehicle electrification both as a strategy for reducing greenhouse gas emission (with the co-benefit of improving air quality) and for supporting the US automotive sector.

According to Forbes, one of President Biden’s main challenges when it comes to widespread electric vehicle adoption will be attitudes. Partly thanks to the campaigning of the oil and gas industry to demonise EVs, drivers are still reluctant to change their driving habits.

The most important factor that speaks against electric cars for most people is range anxiety, as well as lack of charging stations and high initial costs.

IDTechEx’s “Electric Truck Markets 2021-2041” report provides a COVID-19 adjusted, 20-year outlook for both the medium-duty (MDT) and heavy-duty truck (HDT) markets. A great deal of attention is given to whether battery-electric trucks will be able to offer the range to make long-haul trucking applications viable with an electric powertrain.

This question will be addressed to some extent by the first delivery of Tesla Semi trucks, which at least provisionally is still pencilled in for 2021 (though production timelines have slipped on multiple occasions).

While the mass of batteries required and the likely need for ultra-fast charging undoubtedly make long haul EV trucking a challenge, there is a significant market for medium and heavy-duty trucks that do not require extensive range. For example, at the Novi Battery Show, Keshav Sondhi, Director of Fleet Engineering and Sustainability at Pepsi, said that of their Class 8 trucks at their Sacramento facility, 93 per cent operate less than 100 miles a day and are parked for 15+ hours, time which is more than adequate for charging.

Swedish heavy-duty truck and bus manufacturer Scania’s recent forecasts highlight how quickly the market is progressing around the world.  By 2025 they expect 10 per cent of their total vehicle sales will be electric vehicles, rising to 50 per cent of sales by 2030.  With this pace of change, manufacturers and parts suppliers not already making strong plans to transition to zero-emission powertrains are likely to find themselves left behind.

Picture: a photograph of an EV Truck being charged

As the 2030 deadline for the sale of petrol and diesel cars grows closer, Michael Kenyon MIET, Technical Lead at Bureau Veritas, explores the importance of electrical...

JLL and Cushman & Wakefield are just two in a long list of high-profile companies that have distanced themselves from the Trump Organisation. After recent attack...

Electing Ambitious Change – The US Election

Claire Walmsley-Moss comments on Joe Biden and Kamala Harris’s winning campaign goal to put the US on the path to carbon-free electricity production by...

The process of repairing the economic damage from the pandemic must favour plans to tackle climate change, say CEOs of more than 60 British...