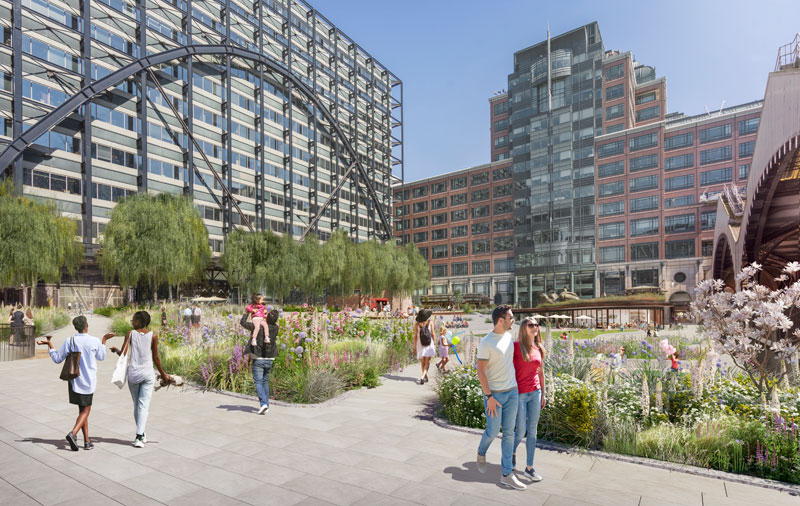 British Land is progressing with plans to transform Exchange Square at Broadgate into a new park.

Designed by architects DSDHA, the reimagined Exchange Park will quadruple the amount of green space at Broadgate, the largest pedestrianised neighbourhood in Central London.

The 1.5-acre park is the first to be delivered in the capital in recent years.

Work to Commence in December 2020

In addition to the expansive green space, the park will feature an exciting mix of planting and trees, a stream flowing through it, amphitheatre seating and new retail and event spaces, all of which will be open to everyone. Enabling works are already underway and site works will commence in December 2020.

Health and wellbeing form a vital part of the £1.5 billion investment in Broadgate to create an environment that brings people together to work, shop, drink and dine. Research commissioned by British Land shows that putting good design at the heart of urban development could lead to substantial improvement in peoples’ mental health, which would result in substantial economic rewards.

The work is a continuation of British Land’s focus on mixed-use portfolios. They say that COVID-19 has merely accelerated many of the trends that inform this strategy, such as more flexible working and the shift to online retail.

Oliver Sells QC, Chairman of the City of London Corporation’s Open Spaces and City Gardens Committee, commented: “London’s green spaces are more important now than ever before and are treasured by residents, workers and visitors alike.

“We’re pleased to support British Land’s plans for Exchange Square. This move aligns with our radical Climate Action Strategy which will make the City of London net zero emissions by 2040 – in part by increasing the amount of green space in the City.”

David Lockyer, Head of Broadgate, British Land said: “Creating better quality, healthier and more sustainable places is now even more important as result of COVID-19. We are already doing this at Broadgate, which has undergone significant transformation into a mixed-use destination that appeals to everyone. This is a fantastic opportunity to continue to do this, by creating a new park for London at Broadgate that can be enjoyed by all the community.”

The evolution of Broadgate into a world-class, mixed-use destination continues, with the recent completion of 100 Liverpool Street and 1FA. 100 Liverpool Street is a 520,000 sq ft redevelopment designed by Hopkins Architects, with a focus on technology, sustainability and wellbeing. It has attracted an exciting occupier mix including GANT, Watches of Switzerland and the UK’s first John Reed gym, as well as office occupiers including law firm Millbank, Japanese bank Sumitomo Mitsui Banking Corporation Europe and advisory house Peel Hunt.