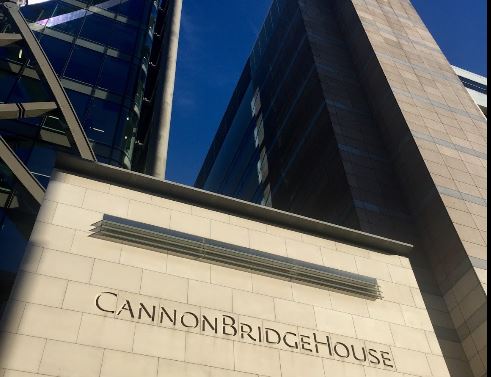 Savills has sold the long leasehold interest in Cannon Bridge House, EC4 to a joint venture between FG Asset Management and Valesco on behalf of Blackstone, with backing from Mirae Asset Daewoo and NH Investments & Securities.

The purchase price was £248 million.

This landmark City of London building occupies a prominent location directly above Cannon Street Station and benefits from a circa one acre private roof garden and expansive river views.

Both properties are fully occupied.

The River Building recently underwent a comprehensive refurbishment to a tech & media focussed finish and was 100% pre-let to Deliveroo and Kobalt Music (at an overall rent of £62.05 per sq ft). The Atrium Building is multi-let to a number of financial tenants including Natixis and IG Group (£38.41 per sq ft overall)l.

The total building is held long leasehold with 233 years unexpired at a peppercorn rent. The total gross income is £13,071,106 per annum (overall passing rent of £45.96 per sq ft).

Stephen Down, head of Central London investment said: “The sale of Cannon Bridge House concluded the business plan of Blackstone who undertook a significant repositioning of the River Building to create a modern and dynamic office environment that appealed to the tech and media industries.”

Capital values increased 0.1% across UK commercial property in April 2018, according to the latest CBRE Monthly Index. Rental values were flat over the month.

The Industrial sector again provided a boost to overall results in April 2018. Capital values increased 0.7% over the month, with both the South-East and Rest of UK markets performing roughly in line with the sector average. The Industrial sector also outperformed in terms of rental value growth with an increase of 0.2%.

Office capital values increased 0.2% over the last month. Capital values in Central London Offices were flat in April, outpaced by growth in both the Outer London/M25 (0.1%) and Rest of UK (0.4%) markets.

Rental values were flat across all submarkets.

CBRE has announced a definitive agreement whereby they will acquire a 60 per cent ownership interest in Turner & Townsend, a UK-based global leader in program,...