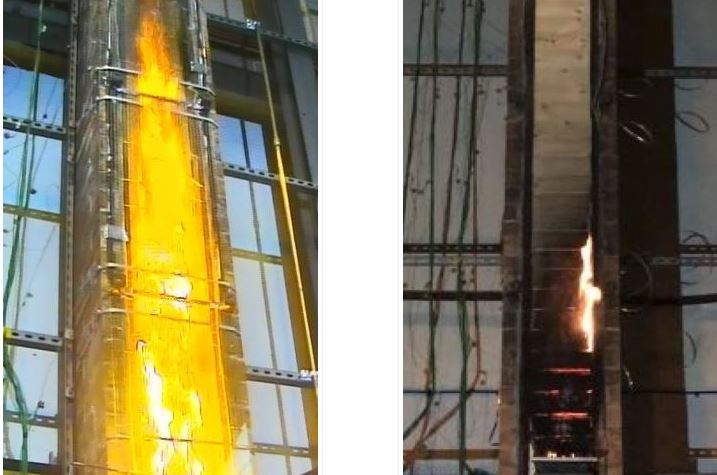 The Association of British Insurers (ABI) commissioned the Fire Protection Association (FPA) to carry out a series of carefully controlled experiments, which in their opinion recreated more realistic building conditions than those in which the standard tests are done, in an effort to measure what difference these factors could make in the event of a fire.

The real-life factors overlooked by the official testing regime according to the ABI include:

In its submission to the Hackitt Review, the ABI called for an end to the use of all but non-combustible materials in construction, along with a reformed testing regime that replicates real world conditions to provide genuine evidence of how materials perform in a fire. The results of these latest tests all reinforce the importance of urgent reform, argues the ABI - describing the current testing regime as Utterly Inadequate.

Huw Evans, Director General of the ABI, said: “Dame Judith Hackitt’s important work post-Grenfell has already recognised the building control system is broken. This latest research is yet more evidence that fundamental reform is needed to keep our homes and commercial premises safe from fire. It is a matter of urgency that we create the right testing regime that properly replicates real world conditions and keeps pace with building innovation and modern design.”

The Issue: Test fires are only made up of wood. In modern blazes, around 20% of the materials involved are plastic.

Test 1: Two fires were created with the same energy content, one purely built out of wood, the other containing 20% plastic.

The results: The flames created by the fire containing plastic had a flame length around 1 metre longer than the wooden fire; the temperatures involved were 100 degrees hotter and still increasing when the plastic-containing fire had to be extinguished because it was exceeding lab safety conditions.

The implications: As well as the ability of the fire containing plastic to spread faster and create higher temperatures, building materials such as aluminium lose a lot of their strength at higher temperatures. A lot of cladding, including that used on Grenfell Tower, is made up of aluminium composite panels.

The Issue: Cladding materials can be tested as a sealed unit, whereas when fitted on a building they often include gaps, and cover a far more extensive area.

Test 2: Fires were started at the bottom of three columns. One had no cladding or cover at all, the second had cladding fitted to create a void but with sealed edges and ends, the third was clad with a void, leaky sides and some ventilation at the top and bottom.

The results: Fire climbed 1.5 metres up the open face before burning out and self-extinguishing; the sealed cladding unit also saw fire climb a similar distance before it ran out of oxygen and self-extinguished; the unit where the cladding had gaps rapidly caught fire up the entire 6 metre height of the testing column.

The implications: The availability of oxygen makes a massive difference to how materials respond to fire. In well-ventilated voids, such as behind some cladding systems, the rate at which fire spreads can be greatly increased by a chimney effect. Any tests which restrict the availability of oxygen in a way that doesn’t happen on a full scale building will not be able to correctly assess how the materials will behave in practice.

The Issue: Materials tested will be in manufacturer condition, but during their actual use will often be pierced by things such as vents or ducts

Test 3: A section of wall and cladding was set up with a plastic vent installed – a common feature - and a fire started beneath the structure.

The results: Temperatures inside the vent indicated it was providing an almost instantaneous route for fire directly into the void between the wall and cladding, long before the time it would take fire to break through the outside cladding panels.

Implications: Fire safety, particularly in high rise buildings, often relies upon assumptions about how long it will take fire to penetrate certain areas of the building. The presence of fittings such as vents can make a big difference to how materials perform and how a fire will spread, and needs to be realistically modelled in testing.

Further tests examining the real-life performance of cavity barriers and the differences made by materials being unrealistically strengthened during the testing process were also carried out and are detailed in the full report.  To view - Click Here

This research has been provided in full to the Hackitt Review into building regulations and fire safety, established in the wake of the devastating Grenfell Tower blaze.

Jonathan O’Neill, Managing Director of the Fire Protection Association said: “The results of this important research confirm long-held concerns by many in the fire sector that the current cladding test standard requires urgent review to ensure that systems that pass are reflective of the systems that are installed and of the risks to which they are exposed. We urge BSI (British Standards Institution) to urgently reconvene the group responsible for this standard to consider the results of this research and to make changes to the standard as required.”

Which? Calls For Plastic-Backed Fridges To Be Removed From Sale

Hundreds of fridges, freezers and fridge-freezers currently on sale in shops across the UK are potentially unsafe, Which? has warned as it calls for all plastic-backed refrigeration products to be urgently removed from sale.

An investigation of more than 500 of the most popular refrigeration appliances on the market shows that the backing material on close to half (45%) of all fridges, freezers and fridge-freezers tested is made of unsafe plastic that poses a potential fire risk.

Worryingly, the investigation also revealed that a number of models backed with plastic that manufacturers previously claimed was flame retardant could also speed up the spread of a fire.

Which? first highlighted significant concerns about the safety of some models of fridges, freezers and fridge-freezers on the UK market more than six months ago, but following a lack of government action is releasing the results of its comprehensive testing – the largest investigation in the UK – into safety of the backing material used in hundreds of the most popular fridges, freezers and fridge-freezers currently on the market.

Which? now believes all plastic backing material could be a fire risk in people’s homes due to the potential to accelerate the spread of flames in the event of a fire starting.

All plastic-backed fridges, freezers and fridge-freezers on the market pass existing safety standards but Which? is warning that these safety tests are inadequate, not fit for purpose and do not come close to replicating the source of a real house fire.

Peter Vicary-Smith, Chief Executive of Which?, said: “People will rightly be outraged to learn that manufacturers and retailers are selling potentially unsafe products that could be putting their lives at risk.”

Picture: Main - cladding testing performed on behalf of the ABI. Below - plastic-backed fridges have cause a series of fires...and fatalities as a result

The relentless rise in the cost of motor insurance continues with the Association of British Insurers' latest Motor Insurance Premium Tracker showing that the costs...