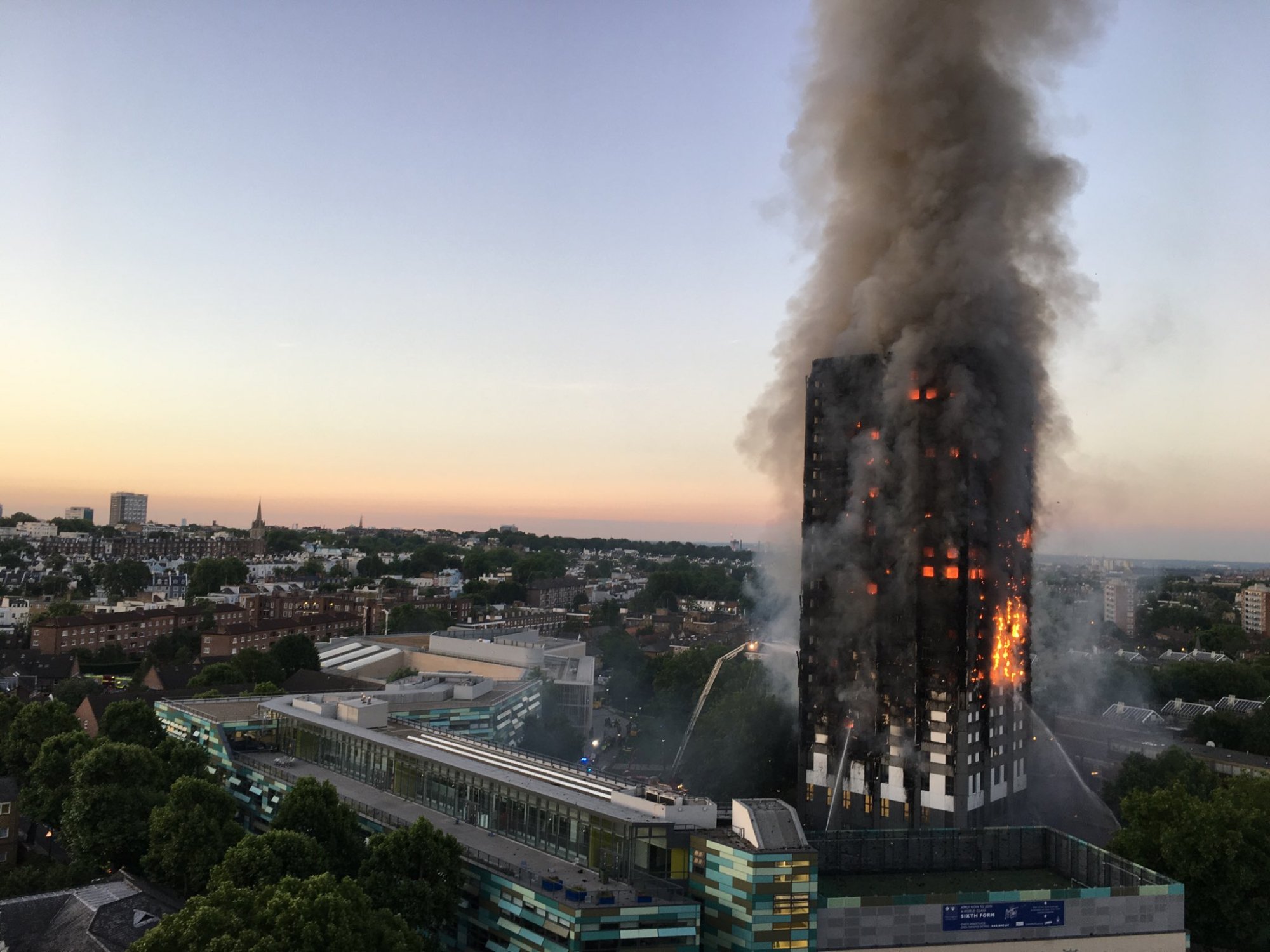 A complete fire doorset recovered from the lower floors at Grenfell Tower has been tested - and has failed. We've got the latest comments and updates plus the original story.

Synseal and its Masterdor division are aware of reports in the media about tests being carried out on fire doors installed into Grenfell Tower.

For the sake of clarity, we would like to point out:

In recent weeks we have offered our full support and cooperation to the Metropolitan Police as it undertakes its investigation and we will continue to do so if required.

From Twitter Fire Door Inspectors@firedoorguy
Even a perfectly installed, and maintained door, will not perform if wedged/blocked open - yet we see it every day. #FireSafety is seen as an inconvenience - especially in the workplace.

Last summer, after decades on the side-lines, fire safety was finally centre-stage for the worst possible reasons. Grenfell was a national catastrophe but we’re now faced with a once-in-a-generation chance to drastically improve fire safety standards throughout construction and we can start with the most basic fire safety product of them all - fire doors.

It’s frighteningly common for manufacturers to fire test their door components separately, rather than testing the completely assembled door set. That can lead to products with FD30 ratings that only last a fraction of the time they’re supposed to.

It’s vital that this changes. Fire door suppliers need to put aside any thoughts of profit, margins, and getting the edge on the competition – this is about people’s lives.

Architects, local authorities, house-builders and others must demand better from their contractors. And product manufacturers and installers have to enshrine health and safety as their highest priority.

Every door component must be tested as part of a complete door set. And the 30 minutes in FD30 has to be seen as a bare minimum, not a target. In a fire, seconds count – and that means every manufacturer has a moral responsibility to make their fire door products as good as they can possibly be. That will take hard work and investment. But together, as an industry, we can help make the built environment a safer place.

A complete fire doorset recovered from the lower floors at Grenfell Tower have been tested - and have failed. They were supposed to be 30 minute fire rated but only lasted 15.

It has not been revealed where the doors were tested but it is most likely at the BRE establishment that undertook cladding tests after the inferno killed 71 people.

Fire doors are one of the most basic passive fire protection systems installed in both domestic and commercial buildings but their effectiveness can be compromised by a variety of factors - not least their installation and a basic lack of maintenance.

The supplier to Grenfell is believed to have been Manse Masterdor (see statement above) who will have almost certainly supplied finished product to an installer knowing that it would be illegal for the installer to modify the product (with hardware or glass for example) without that modification receiving testing and certification (the installer at that point becomes 'the manufacturer') because of the risk of degradation. However, many fire door inspections reveal that the intumescents which are fundamental to a fire door's effectiveness have either not been fitted properly (or at all) or have degraded over time.

Masterdor offers a glass reinforced plastic fire door sets (tested to either a 30 or 60 minute fire rating) in both 25mm standard and a narrow profile 15mm wheelchair Part M compliant threshold - the frame option will have an impact on fire resistance.

An expert's view
Simon Beer from Bluesky Certification which undertakes fire testing on doors, windows and other products in association with Cambridge Fire & Research told ThisWeekinFM: "I had expected something like the issue that has been highlighted with the fire doors to emerge from the enquiry into the Grenfell Tower fire.

"it is critical that fire doorsets are manufactured, installed and maintained correctly in order to maintain the fire resistance."

Only this week TWinFM attended a fire door test simulation as Simon Beer's guest. He continued after the event and after the latest Grenfell revelation: "The fire test demonstration that was part of our training course proved that a small variation of the specification can be detrimental to the performance.

"I have expressed the opinion that the fire at Grenfell Tower is likely to have spread on the inside of the building as well as the outside, due to issues with fire compartmentation. This opinion is based on issues that I regularly see on site with respect to fire stopping, compartment walls and fire doors. Problems with manufacturing, installation and ongoing maintenance can all have a significantly detrimental effect on the performance and the fire compartmentation will only be as good as the weakest point."

30?
Beer continued: "With regards to the fire doors that were removed from Grenfell Tower and then tested, I don’t know where they were tested or to what standard, how they were installed for the test or whether there was damage caused by installation, maintenance or ongoing use whilst they were installed at Grenfell Tower. However on the face of it an FD30 fire door that only achieves 15 minutes is likely to have a serious issue with the specification."

The test observed by ThisWeekinFM featured a deliberately low specification fire doorset with deliberate flaws incorporated - and it still managed to last a full 30 minutes (apart from at one section of glazing which is where the deliberate fault was included).

Ministerial reassurance
Housing Minister Sajid Javid told Parliament (on March 15) that the fire door testing results were not 'systemic'...that fire doors that would fail the 30 minute resistance test had not been installed all over the UK and thus the risk to public safety remained low.

Javid said: "An investigation has involved a thorough examination of every aspect of the Tower, including front doors to flats within the property. These doors include a glazed fire door manufactured around 5 years ago.

"Initial inspections indicate the door is believed to have been designed to resist fire for up to 30 minutes. But, when tested by the Metropolitan Police, it failed after approximately 15 minutes. The Metropolitan Police considered that this test result might have wider implications for public safety and alerted my department."

No risk
Javid continued: "The government immediately sought advice from the Independent Expert Panel to test the findings to see whether any action was required as a result. The panel consulted with representatives from the Metropolitan Police, the government’s Chief Scientific Advisers and the National Fire Chief’s Council.

"Following this, the Expert Panel has advised that the risks to public safety remain low."

Reassurance?
In what might be seen as undermining his own reassurance, the Housing Minister also offered this statement: "There is no evidence that this is a systemic issue. Data between 2009 and 2017 shows that fire does not generally spread beyond the room of origin."

Opposition view
Tony Lloyd, Shadow Housing Minister, said: “If this isn’t systemic, what assessment has been made of how many buildings are potentially affected by this? How many individual flats? How many people who have fire doors that simply don’t do the job?”

Hackitt
Dame Judith Hackitt is undertaking an independent review of Building Regulations and Fire Safety. She has been made aware of these latest findings.

Beer - mandatory accreditation should be instigated
Simon Beer added: "The Building Regulations currently have a recommendation for UKAS accredited 3rd party certification to cover the manufacture and installation of fire doors. I understand that the cost to the industry is the reason that this was recommended rather than mandated. I believe a good first step to improving standards would be to make this mandatory with immediate effect."

Fire door safety campaigners are stressing the life saving role of fire doors as part of this year’s Fire Door Safety Week (23-29 September). The week is...

A recent report by the Building Research Establishment for a local authority found that: ‘It was not possible to conclude that the fire doors would meet the...