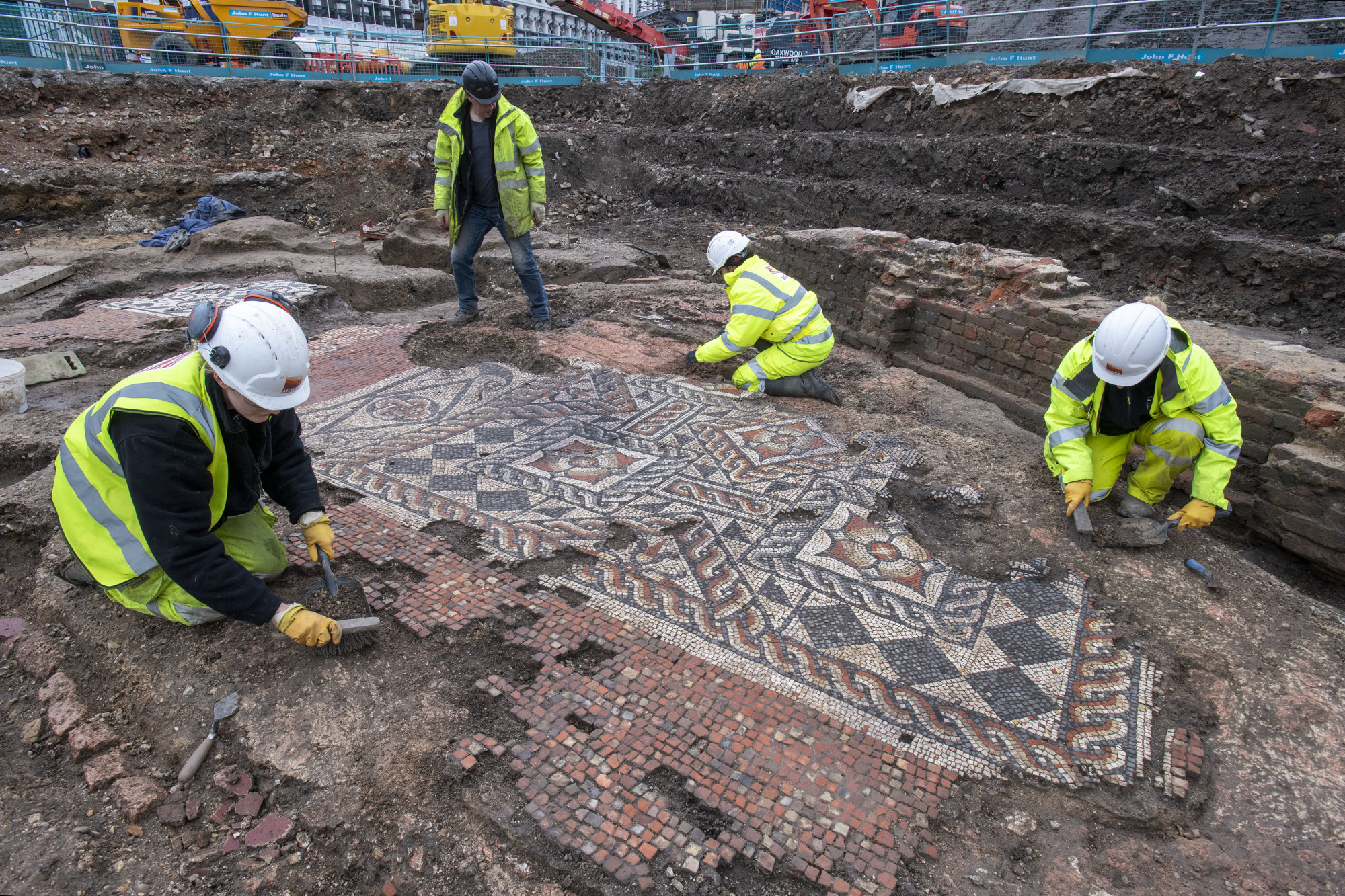 The largest area of Roman mosaic found in London for over 50 years has been uncovered near The Shard.

Archaeologists from MOLA (Museum of London Archaeology) have uncovered an incredibly well-preserved mosaic that once decorated the floor of a Roman dining room. Discovered a stone’s throw away from The Shard, experts have determined this to be the largest area of Roman mosaic found in London for over 50 years.

MOLA Site Supervisor, Antonietta Lerz, said: “This is a once-in-a-lifetime find in London. It has been a privilege to work on such a large site where the Roman archaeology is largely undisturbed by later activity-when the first flashes of colour started to emerge through the soil everyone on site was very excited!”

Tiles From a Roman Dining Room

The recently uncovered mosaic includes two highly-decorated panels made up of small, coloured tiles set within a red tessellated floor. The largest panel shows large, colourful flowers surrounded by bands of intertwining strands – a motif known as a guilloche. There are also lotus flowers and several different geometric elements, including a pattern known as Solomon’s knot, made of two interlaced loops.

Dr David Neal, former Archaeologist with English Heritage and leading expert in Roman mosaic, has attributed this design to the “Acanthus group” – a team of mosaicists working in London who developed their own unique local style.

The smaller panel has a simpler design, with two Solomon’s knots, two stylized flowers and striking geometric motifs in red, white and black. This has an almost exact parallel has been found in Trier, Germany, and the same mosaicists were likely at work in both places. It provides exciting evidence for travelling Roman artisans at work in London.

The mosaic was set in a large room, currently interpreted as a dining room, which the Romans called a triclinium. It would have contained dining couches, where people would recline to eat. From these, guests could gaze at the beautiful flooring whilst enjoying their food and drink. The walls of this room were brightly painted, and fragments of colourful wall plaster have been found on the site.

While the largest mosaic panel can be dated to the late 2nd to early 3rd century AD, the room was clearly in use for a longer period of time. Astonishingly, traces of an earlier mosaic underneath the one currently visible have been identified. This shows the room was refurbished over the years, perhaps to make way for the latest trends.

The dining room might have been part of a Roman mansio – an upmarket “motel” offering accommodation, stabling, and dining facilities for state couriers and officials travelling to and from London. Given the size of the dining room and its lavish decoration, it is believed that only high-ranking officers and their guests would have used this space. The complete footprint of the building is still being uncovered, but current findings suggest this was a very large complex, with multiple rooms and corridors surrounding a central courtyard.

“This is a once-in-a-lifetime find in London. It has been a privilege to work on such a large site where the Roman archaeology is largely undisturbed by later activity-when the first flashes of colour started to emerge through the soil everyone on site was very excited!”

It was ideally located on the outskirts of Roman Londinium, an area centred on the north bank of the Thames and roughly corresponding to the modern City of London. The complex was built by the river crossing that led into the city and not far from the main road connecting London to other important centres in south-eastern Britain, including Canterbury and the cross-channel port of Dover. As such, it provided excellent transport links for visiting dignitaries.

Neighbouring the mansio, archaeologists have identified another large Roman building, likely to have been the private residence of a wealthy individual or family. Traces of lavishly painted walls, terrazzo-style and mosaic floors, coins, jewellery and decorated bone hairpins all testify to the level of wealth enjoyed by the people living in this area 2,000 years ago.

The mosaics will be carefully recorded and assessed by an expert team of conservators. They will then be lifted and transported off-site, enabling more detailed conservation work to take place. Excitingly this will offer the opportunity to investigate the surviving traces of the earlier mosaic. Future plans for the public display of the mosaics are currently being determined in consultation with Southwark Council.

Picture: a 3D reconstruction of the room with the discovered mosaic (artist's impression). Image Credit: ©MOLA

The Liberty of Southwark

Excavations on the site have been taking place ahead of the construction of The Liberty of Southwark, a mixed-use scheme that is being jointly developed by regeneration specialist U+I (now owned by Landsec) and Transport for London (TfL). Once completed, the Liberty of Southwark will provide new homes, shops, retail and workspace.

The scheme has been designed by local architects Allies and Morrison and intends to be sensitive to the Victorian industrial and commercial architecture of the area. 15 Southwark Street, which dates from the 1860s, will also be restored as part of the development.

Timeline for the Site

Picture: a photograph of the mosaic with four archaeologists in PPE also shown. Image Credit: ©MOLA/AndyChopping

London-based contract caterer Fooditude has reopened its kitchen to help feed the most vulnerable people in their local community. They are serving vulnerable and...