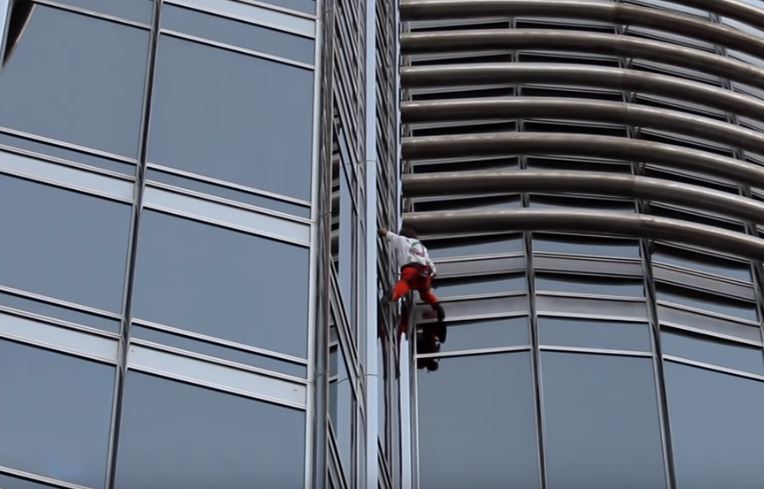 French national, Alain Robert, also known as Spider-Man for his penchant for climbing tall buildings without so much as a rope (let alone permission) was sentenced to 20 weeks imprisonment, suspended for 2 years, having scaled the former Heron Tower in the City of London.

The free-climber (aged 56 ) was accused of causing a public nuisance when he was taken down by coppers having gotten to the top of 110 Bishopsgate - now know as the 202 metre high, Salesforce Tower.

Along with the suspended sentence, Robert was also ordered to pay £5,500 compensation and received a restraining order to not climb any building in the UK until further notice.

The stunt was performed on Thursday October 26 and Robert appeared in court the following day. Commander Karen Baxter from the City of London Police told ThisWeekinFM: “While some people may not regard yesterday’s stunt as the most serious of offences, it wasted a considerable amount of police time as well as that of the London Fire Brigade and the London Ambulance Service, leaving them unable to respond to genuine emergencies.

“The residents and workers of the City faced major disruption to their daily routine and road closures, which needed to be put in place to protect the general public’s safety, caused a significant disturbance to local transport routes."

Commander Baxter continued: “Today’s result at court should act as a deterrent for anyone thinking of participating in a similar illegal act. You will be subject to a criminal investigation the result of which may well result in you having a permanent criminal record.”

Since he turned 11-years old, Robert is said to have free-climbed 150 towers around the world including the world's tallest building - Dubai's Burj Khalifa.

The City of London Police arrived at 1:37pm and Robert was arrested shortly after 2.14pm having gotten to the top and raised his arms in victory  - and then lowered them in a set of handcuffs.

On June 1, ThisWeekinFM reported an horrific fall from the Heron Tower after a young woman fell to her death from the 13th to the 6th floor of the 36 floor building.

British Telecommunications PLC has been fined after two of its employees were seriously injured in falls from height. Teesside Crown Court heard how two British...

FMs and management teams have a duty of care to staff and building users. In extreme heat such as we are experiencing right now, itâ€™s vital to make sure people are as safe and comfortable as possible. Click Image To Read More