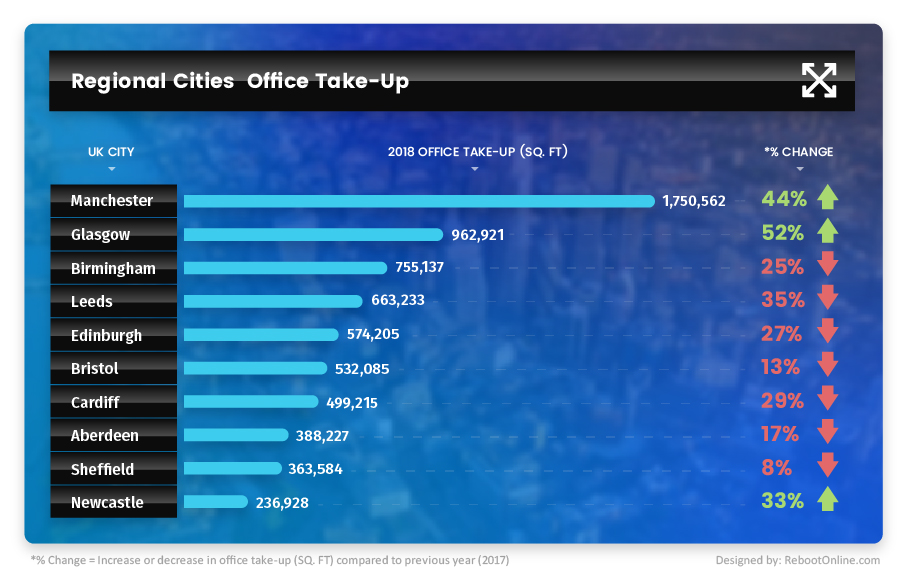 The total investment volume and take-up of office space in 10 major cities across the UK in 2018 has been complied by commercial property specialists Savoy Stewart.

Manchester benefited from the highest office investment volume at £989 million in 2018. This represented an 8% increase from 2017, where the investment figure was £917 million.

Subsequently, Glasgow gained an investment volume of £468 million. This was a 3% rise from 2017, where office investment level was £453 million.

Collectively, £3.347 billion is the staggering sum, when totalling each of the ten cities 2018 office investment volumes together.

Savoy Stewart also surveyed 436 office based businesses from a range of industries, that are all looking for new working premises this year to discover the factors (other than price) they are mainly focusing on in their search criteria. They ranked as follows:

Darren Best, MD of Savoy Stewart, said: “Brexit is not entirely discouraging businesses from searching for and acquiring new office space. On the face of it, take-up and investment volumes in different cities outside of London indicates a strong and promising outlook for the office market. Though some cities scope for office space seems to be more active and resilient to economic pressures than others. Looking ahead, this research also provides a great insight into the primary factor’s businesses are putting high on their agenda when searching for office premises this year.”

The office take-up statistics for Birmingham, Bristol, Edinburgh, Glasgow, Leeds, Manchester and Newcastle is exclusive to office take-up in their respective city centre.