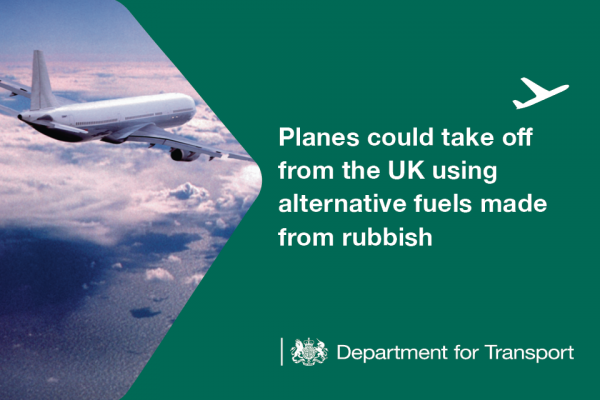 If there is an ultimate aim in delivering confidence in biofuels, then the announcement that planes could take off from the UK using alternative fuels made from rubbish has got to be one right up there with the best of them.

As part of plans to promote clean alternative fuels, the government is offering funding for projects in the UK to develop low carbon waste-based fuels for planes and lorries, with matching funding from industry.

Trials of sustainable jet fuel, made from waste materials, have taken place in Europe and North America. The launch of a UK competition will see British experts conduct pioneering research in this sector.

There are already 70 groups in bidding for government funding.

The new fuels will be chemically very similar to conventional fuels, so can be used in existing aircraft without the need for any engine modifications.

The low carbon transport fuels made from waste materials could be worth £600 million a year to the British economy by 2030 and could also support up to 9,800 new jobs. Transport Minister Jesse Norman said: “We are committed to cutting carbon emissions and promoting new environmentally-friendly fuels that will help us meet that goal. We are making funding available to businesses which will lead the way in developing alternative fuels that are efficient, sustainable and clean.

“We want every new car and van in the UK to be zero emission by 2040 but we know lorries and aeroplanes will rely on more traditional fuels for years to come so we must promote environmentally friendly alternatives.”

A £22 million fund it targeting creating five new low carbon fuel plants by 2021. The money is available to projects that will produce low carbon waste-based fuels, to be used in planes and lorries where it is not viable today to switch to electric power, because of the large weight of the vehicles.

Picture: Planes could take off from British airports using alternative fuels made from rubbish