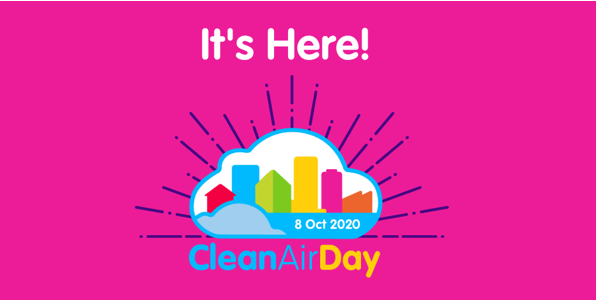 Clean Air Day is the UK's largest air pollution campaign, engaging thousands of people at hundreds of events, and reaching millions more through the media. The campaign normally takes place on the third Thursday in June – however, due to COVID-19, this year Clean Air Day is taking place today, 8 October 2020.

This year, the Building Engineering Services Association (BESA) says there should be more emphasis placed on the quality of air inside buildings. The Association is supporting the event and will be using its social media platforms to promote the #CleanAirDay messages. However, it believes that clean air campaigns and events continue to be focused almost exclusively on outdoor pollution and that this should change in the face of the COVID-19 pandemic. The crisis has raised awareness of the role of indoor air quality (IAQ) in protecting the health and wellbeing of building occupants, the Association said.

The World Health Organisation (WHO) recently highlighted the risk of virus transmission inside poorly ventilated spaces and a number of scientists pointed out that building ventilation systems would be crucial in limiting the chances of “super spreader” events.

This is, therefore, a great opportunity for Clean Air Day to promote IAQ solutions, according to BESA.

“Clean Air Day is a great initiative and has been very successful in raising awareness about the wider air pollution issue and we will be supporting the day’s events. However, the emphasis continues to be heavily on outdoor pollutants despite the fact that 90% of people spend at least 90% of their time indoors – and that percentage often increases as we move into the winter months.”

“Solving global pollution is a generational challenge that will take decades whereas we already have many of the answers to improving IAQ,” said BESA chief executive David Frise. “The importance of ventilation and ventilation contractors has grown as a result of the pandemic and we hope that more of the focus of the event this year will turn to the indoor environment and its vital role in safeguarding people’s health and wellbeing,” he added.

As well as trying to cope with the government’s new restrictions on the number of people gathering indoors, BESA also said facilities managers should be revisiting their ventilation strategies to minimise possible transmission risks.

“We have been arguing since the early days of the pandemic that ventilation can play a crucial role in reducing the threat of virus transmission,” said Nathan Wood, chair of BESA’s Health & Wellbeing in Buildings group. “As the weather turns colder, it is inevitable that people will be spending more time inside buildings so mechanical ventilation and air cleaning technologies will be increasingly important.”

The BESA group has been spearheading a campaign to turn buildings into ‘safe havens’ from outdoor pollution and their focus recently turned to schools, which have become a key area of concern since many children returned to poorly ventilated classrooms in September.

A survey of 20 UK classrooms carried out by National Air Quality Testing Services (NAQTS) revealed very low air change rates in many that could increase the risk of virus transmission.

“Our study showed that some classrooms had air change rates below 0.5 per hour and that even small increases in flow rates could significantly reduce the risk of infection,” said NAQTS chief executive Douglas Booker. “Raising airflows from zero to 100 m3/hr cuts the risk by up to 60%.”

Many schools are keeping children in their classrooms for longer periods to maintain social distancing and BESA is concerned this could increase their exposure to the virus. Simply opening windows is not a sustainable strategy, the Association said.

“If there is little or no wind, the air will not naturally flow into a building from outside particularly if the temperature outside is colder than inside. In that case the air will flow out rather than in so even less supply air is available to the occupants,” said BESA’s head of technical Graeme Fox.

Another problem with opening windows is the risk of increasing the amount of polluted air entering the building, particularly in urban areas.

“There is a big difference between outside air and ‘fresh’ air,” said Mr Wood.  “Bringing in outside air may create other risks to health if it is full of pollutants. Outside air needs to be filtered and air purification technologies could be used in certain circumstances. The latter have been proving their worth in healthcare settings.”

Many mechanical ventilation systems also use a ‘recirculation’ mode to improve energy efficiency, but this should be switched off until the current crisis is over to minimise the risk of contaminated air re-entering the building, according to BESA.

Recirculation dampers can usually be switched off manually or by using electronic controls. Return air from air handling units should also be reduced and ‘purging’ carried out to avoid air moving from the extract side to the supply side of these units.

BESA also recommends that the ventilation is run for longer and at higher speeds than normal – starting two hours before occupation and kept running at lower speeds overnight and at weekends to purge the building.

This will increase the amount of air coming from the outside, which means it is even more important than ever to regularly check, clean and replace filters that extract dust and contaminants from the air before it enters the building.  BESA says it is vital that maintenance staff wear full protective clothing, gloves, respirators and goggles when carrying out this work.

BESA has also provided expert evidence to the consultation on the draft Environment Bill, which is due to be reviewed again in January, calling for specific targets for reducing indoor contaminants. It also believes the government should be considering the growing risk from particles smaller than PM2.5 and that these should be included in any future legislation.

“Ventilation contractors have enjoyed new found respect during the coronavirus crisis,” said CEO David Frise. “There is a growing recognition of the importance of ventilation systems – their design, operation and maintenance – in protecting the health and wellbeing of building occupants.

“None of this is rocket science. Maintaining good ventilation is common sense, but there has been a lack of awareness of the issue among building operators. Thankfully, that is now starting to change. The next stage is to see this reflected in government policy and legislation,” added Mr Frise.

BESA also welcomed the new round of government spending on Air Quality Grants for local authority projects in England aimed at helping schools, businesses, and communities reduce the health impacts of air pollution.

Councils can apply for funding to help tackle harmful particulate and nitrogen dioxide (NO2) emissions in cities and towns, with previous projects having focused on areas such as air quality testing, awareness raising as well as the risk posed by wood burning stoves.

The government has distributed more than £64m through the scheme since 1997 and said this had reduced levels of fine particulate matter (PM2.5) by 9% since 2010, while NO2 emissions from vehicles are now at “their lowest ever level”.

This follows the government’s promise to develop a set of legally-binding environmental targets with a view to them coming into force from autumn 2022.

“The grants scheme has definitely made a difference, but it would be good to see some of this funding aimed at projects that protect vulnerable building occupants like the elderly, infirm and school children from contaminated indoor air,” a BESA statement said.

For more information about Clean Air Day go to: www.cleanairday.org.uk and follow #CleanAirDay on social media. To learn about indoor air quality, go to: www.theBESA.com/iaq

The Building Engineering Services Association has praised the British Standards Institute for speeding up the development of a new standard for measuring indoor...

Building Engineers are the “Physicians of the Future”

The work of building services specialists is increasingly being measured in terms of human health, according to a range of experts speaking at last week’s BESA...

The Building Engineering Services Association has opened its new online academy delivering a comprehensive programme of training courses, assessments and CPD for...

No Budget For Adequate Indoor Air Quality Precautions in Schools

When schools re-open fully in September, only very basic indoor air quality precautions will be taken due to tight budget constraints, according to BESA.  This is...