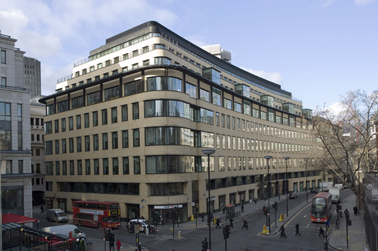 Deutsche Bank is likely to be downsizing in the City of London if not leaving the UK finance capital altogether. The bank has their largest investment banking operations at 1 Great Winchester Street.

A London branch was first opened in 1873 as the first European office outside Germany. The bank also occupies two properties in Birmingham (Broad St and Brindley Place) and has offices in Bournemouth.

Deutsche Bank employs over 8,000 people in the UK and is one of the largest employers in the City. An international workforce in the UK numbers 100 nationalities.

Up until now, the UK offices have been seen as a huge cog, if not the main cog, in Deutsche Bank's global network. However, a downturn in business has seen the German finance giant hard hit to a point where they need to restructure to stay in business.

18,000 jobs will be cut worldwide. Redundancies have already been announced in Japan and Asia-Pacific. Conflicting statements from the bank say that they will exit share trading, much of which happens in London, while maintaining a significant presence in the City.

It has been reported that the first employees to be made redundant were simply told to collect their belongings and leave.

On Monday July 7, Deutsche Bank’s Management Board announced a series of measures to restructure the bank’s operations. These measures include: