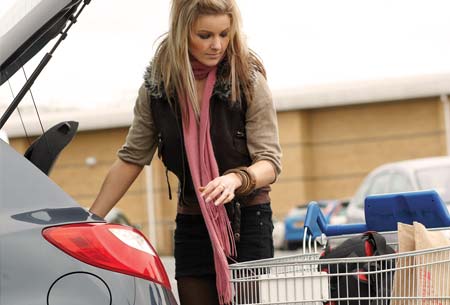 London's Westminster City Council will begin installing smart parking sensors across its entire road network from next week. According to the BBC, the sensors will detect whether a bay is vacant or not and update an App map to allow users to find a parking space as quickly as possible - convenient and congestion & carbon reducing it is claimed.

The App won the Innovation Award at the 2013 Tech Success Awards after Westminster signed a contract with Smart Parking in November. Phase 1 of the programme will see a rollout of over 3,000 bay sensors in spaces across the West End.One of the judges, Clive Longbottom, Co-Founder of QuoCirca, said “By creating this App which shows people where parking spaces are actually unoccupied, I think it’s really helping the driver, it’s helping London."

Brisbane International Airport is the major tourist and commercial gateway to Queensland – Australia’s sunshine state – with over 4 million passengers and 14,000 aircraft movements each year. Part of a planned expansion included a significant upgrade to the terminal, traffic management and parking systems. To provide sufficient parking for the number of passengers, a five level, 1,500 park Multi Level Car Park (MLCP) was built adjacent to the International Terminal. It boasts facilities including a Siemens CCTV system, Skidata barrier controls and parking ticket systems and departure and arrival monitors on each level. A Smart Parking sign guidance system with floor mounted SmartEye units and digital aisle and level signs has been installed to assist drivers to find available parks in the shortest possible time.

At the entrance, a digital entrance sign displays the available parks on each level. On each level, directional signs display the number of available parks in each aisle meaning parkers do not have to hunt for parks and neither do they hold up other drivers for the same reason. This has significantly reduced the time and stress involved in finding a vacant space in such a busy facility and has sped up vehicle movements around the MLCP making it quicker and easier to enter and leave the car park.

SmartEye and SmartRep systems have helped Asda to reduce the number of non-customer vehicles parking at Trafford Park beyond the maximum stay time.

Asda operates a free maximum stay parking system that allows customers to park without charge for up to three hours. While this helped to deter people from parking at the site for long periods of time, the size of the car park made it very difficult for a single attendant to monitor use and enforce ticketing.

Asda commissioned Smart Parking to install SmartEye vehicle sensors in each of the supermarket's 749 car park spaces. The wireless, self-powering devices automatically monitor the duration of stay of every vehicle, alerting the attendant to any vehicles that have stayed beyond the maximum time allowed. The SmartEye system records how the car park is used and presents this information through an online reporting tool, SmartRep, providing space-by-space occupancy data in real time, average stay time reporting and historic car park capacity statistics.

2014 - the Year of the Great British Parking Squeeze

Soaring parking charges; fewer and smaller spaces; the disappearance of free parking. It’s a toxic combination, and one that has led the RAC to declare 2014 as the...