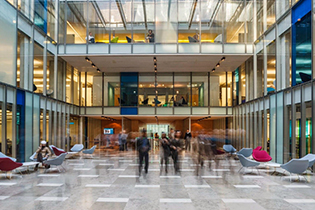 It's been a good week or so for Interserve's FM and construction business with two major contracts turning up (a bit like buses). Meanwhile, Sodexo has achieved international British Services recognition.

Southwark Council has given Interserve a two year contract extension worth £10 million that will see Interserve continue to provide a range of services, including security, mechanical and electrical services, cleaning, helpdesk, portering and pest control at over 90 sites across the Borough, including corporate buildings, care homes, day centres, and 13 libraries.

Paul Symington, head of corporate facilities management at Southwark Council, said: “Interserve has demonstrated that it understands our requirements and consistently delivers to a high standard. Their can do and flexible approach has enabled us to develop a partnering relationship that is providing the best facilities management support for our community.”

Interserve has started working on the Rotherham Interchange refurbishment and upgrade for the South Yorkshire Passenger Transport Executive (SYPTE).

The £12 million scheme will see improvements to the bus station in Rotherham town centre which include the installation of new lighting, glazing, seating, flooring, CCTV and Passenger Information Displays. The scheme will also involve repairs and upgrades to the car park including new cladding, surfacing, the provision of larger spaces for modern cars, electric vehicle charging points as well as improved pedestrian routes.

SYPTE’s Director of Customer Services Tim Taylor said: “We’re looking forward to working with Interserve and we’re confident that together we’ll deliver an improved interchange, which will result in a better experience for our customers.”

The works are a key part of the Rotherham Town Centre Masterplan led by Rotherham Metropolitan Borough Council. The Masterplan aims to regenerate the town centre area and providing sustainable transport is an important element of this.

Cllr Denise Lelliott, Rotherham Council’s Cabinet Member for Jobs and the Local Economy, said: “It’s a really exciting time for Rotherham Town Centre, as we move forward with the Masterplan and look to regenerate the area. Sustainable transport will be an important part of these developments and I look forward to seeing work progress on the new interchange.”

Sodexo's team based in Cyprus have been recognised at the annual Commander British Forces (CBF) Cyprus awards ceremony with one team and four individuals receiving commendations.

Major General James Illingworth presented the awards at Flagstaff House in Episkopi in May. The annual ceremony acknowledges exceptional service and levels of commitment of individuals and teams in their duties.

Picture: Interserve has started working on the Rotherham Interchange refurbishment and upgrade.