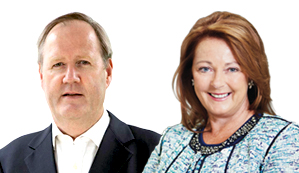 Interserve, the construction and FM firm most likened to Carillion, has denied its finances are in meltdown despite the company's share price plunging 20 per cent in value by lunchtime on November 13.

The company issued a statement on Tuesday which read: 'Interserve notes recent press commentary surrounding the Group and the movement in its share price.

'Interserve confirms that the implementation of the Group’s strategy and the Fit for Growth transformation programme remains on track and the Group continues to expect a significant operating profit improvement in 2018, in line with management’s expectations'.

One of the reasons Interserve keeps hitting the financial headlines is because of its disastrous investments - particularly in joint venture waste-to-energy construction deals. This week, one JV partner, Renewi, revealed that a key construction deadline had been missed for a plant in Derbyshire. This raised fears that Interserve would have to put even more cash aside to pay delay compensation.

In November just one year ago, Interserve told shareholders the cost of quitting energy-from-waste would cost the company dear - circa £200 million (the original estimate had been closer to £90 million). November 2017 had seen Interserve thrown off a £146 million Glasgow project that had been due for completion in November 2016.

Interserve is one of the world’s biggest support services and construction companies with gross revenues of £3.7 billion and a workforce of circa 75,000 people worldwide. interserve is a holds massive contracts with the UK government and with governments across the world - hence the likening to Carillion.

So what exactly has been said about Interserve in the media since Monday November 12.

'Fears are growing over the financial health of Interserve, one of the British government’s biggest contractors, just months after the dramatic collapse of rival Carillion'.

The FT cited Renewi and an increase in the number of investors betting against Interserve’s shares as the triggers for interserve's woes.

The FT quoted Adam Leaver, professor of accounting at the University of Sheffield (who managed to get his figures wrong). Leaver said: ”Interserve employs 80,000 people worldwide (actually 75,000) in jobs that range from cleaning London Underground to maintaining army bases and building a shopping centre in Dubai. It has revenues of £3.25 billion (£3.7 billion) but is valued by the stock market at just £75 million".

Leaver continued: "Interserve is a construction company that made bumper profits maintaining schools and hospitals under PFI schemes, before moving into public services following the financial crash. It has been plunged into difficulty by a series of ill-timed acquisitions and by expanding into probation, healthcare and energy-to-waste contracts, areas in which it had no experience."

Another analyst, Stephen Rawlinson, was also quoted by the FT: “Suppliers and subcontractors are increasingly refusing to work for the company and that is leading customers and funders to question their support.”

Interserve paid only 17 per cent of its invoices on agreed terms in the six months to 30 July 2018, according to Build UK.

'The share price of Interserve has plunged to its lowest point in more than 30 years, as concerns mounted over its finances.

'The Reading-based construction company’s shares closed down by more than 10% on Monday to 39p, as investors digested an update from Renewi. Renewi, in its half-year report, said there had been significant progress on the Derby plant but added that Interserve had not completed construction work by the end of September.

'Interserve had planned for the facility to be fully operational by spring this year. Investors now fear it may be forced to set aside more cash in compensation, even though the company had said it was confident the delay would not be meaningful financially. Some City analysts fear Interserve will have to issue new shares to raise money'.

'Shares in outsourcing firm Interserve have recovered slightly after a second day of turmoil which saw the price plummet by more than 20 per cent.

'The price was down to 31.19p this afternoon, from opening at 40.19p, after hitting a 30-year low yesterday. 'Shares had recovered to 38p after the company issued a statement insisting that its Fit for Growth transformation programme is on track.

'The infrastructure firm's shares fell by more than 12 per cent yesterday as the firm continued to struggle despite a rescue deal that was agreed with lenders in March'.

Last March, Interserve's lenders, which include HSBC and RBS, agreed a rescue package to help the company restructure. Interserve had breached agreements with its lenders in 2017. The rescue package alone cost Interserve £31 million with debt increasing to £645 million.

Chief Executive. Debbie White. Joined Interserve as Chief Executive in September 2017 after spending 13 years at Sodexo where she was CEO of Global Healthcare and Government.

ThisWeekinFM has extracted the following graphs to show the volatility in Interserve's share price trading.

Main Picture: Interserve's CEO Debbie White and CFO Mark Whiteling are struggling to implement of the construction and FM group’s financial strategy and their Fit for Growth transformation programme.

We've got two lots of financial results showing the FM firms concerned are heading in a positive direction. One man has his head in the Cloud though, while the Design...