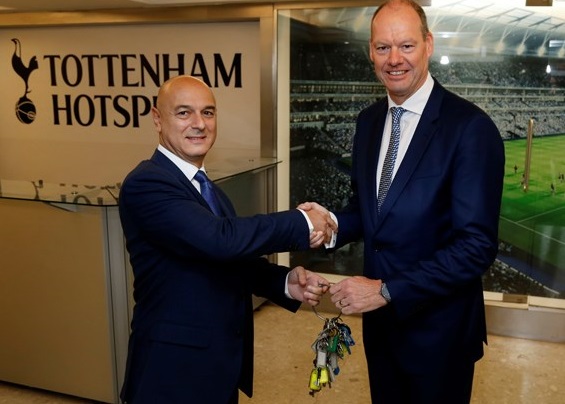 Tottenham Hotspur Chairman Daniel Levy today - Monday May 15 - formally handed the keys to White Hart Lane over to Mark Reynolds, CEO of Mace, Main Contractor for the construction of our the football club's brand new stadium.

New players, playing legends and of course, the fans, said farewell to the club's home of 118 years following yesterday’s match with Manchester United - the last ever to be played at the historic venue.

Valuable items from within the stadium have been retained and placed in storage.

Items include notable signage from around the ground and artefacts such as old shirts, trophies and images on display in hospitality lounges and cabinets.

The vast array of items will either be placed on display within what will become ‘The Tottenham Experience’, auctioned in aid of the Tottenham Tribute Trust, donated to local sports clubs and good causes or retained as personal keepsakes by former players who own the items.

Daniel Levy said: “Today marks yet another historic milestone in our continued progress to deliver our world class new stadium.

“However, it is also a sombre occasion upon which the Club formally hands over its home of 118 years - one filled with so many special memories for us.”

Mace Helps EDGE Strive to be Most Sustainable London Office

Mace, the international construction and consultancy company has been appointed principal contractor by developer Edge, in partnership with Goldman Sachs Asset Management...

Mace has appointed Janyne Gan as Commercial Director for its Operate business. Janyne joins the facilities management division of Mace from CBRE, where she was...