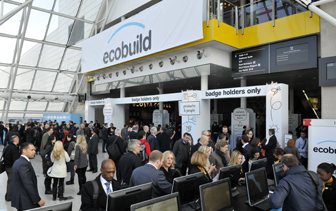 Part of UBM Built Environment, Ecobuild still regards itself as the leading UK exhibition and conference event in the UK construction calendar. It runs until Thursday Feb 10 at London’s ExCel.

Over 40,000 industry professionals from across the entire supply chain are predicted to arrive in London’s Docklands to see 800 exhibitors and a lively conference and seminar programme hosted by celebrities such as Stephen Fry at Ecobuild 2016.

At a meeting last year to launch the promotion for Ecobuild 2016, the organisers were keen to point to an evolutionary path that the event has taken after its 11 years. “Ecobuild will continue to be the most innovative and leading event on the construction calendar,” insisted Alison Jackson, Group Director, UBM EMEA Built Environment Exhibitions. “This enduring brand has been updated and modernised for today’s market challenges while reflecting Ecobuild’s continued success in the construction industry.”

In addition, two ‘inspirational’ features displaying innovation and smart buildings will allow visitors to touch, feel and learn about the future of the construction industry.

On day three of the conference the organisers state it will ‘offer the insights needed to future-proof businesses across the construction sector’.

Under the theme of Next Generation, the day will include ‘visionary’ speakers on the thinking, materials and practices that will be required to meet future challenges for the industry. An eclectic mix of speakers providing a diverse range of viewpoints range from the Cabinet Office and UK-GBC to industry innovators Exterior Architecture and media figures such as television’s Rachel Riley.

Key Next Generation questions will be asked such as the impact and scope of smart technology and the Internet of Things on future buildings and radical options will be proposed.

Speaker highlights include a Leaders’ Debate where Julie Hirigoyen, CEO of UK-GBC will pose five future sustainability challenges to industry follower by major contractors and developers describing how the industry can deliver. In another key session Dr David Hancock, Head of Construction at the Cabinet Office, will address the issue of future construction skills shortages.

Launched at Ecobuild 2015 and promoted to be a well-attended session again at this year’s event, the Big Innovation Pitch, developed in association with Marks & Spencer will seek to unearth innovative sustainability options across the design, construction and energy sectors.

“Providing a fresh change for visitors to Ecobuild, Next Generation has been designed to give an inspiring and surprising glimpse of innovative answers to future problems,” said Martin Hurn, Event Director. “Following on from what will be a compelling first two days covering homes and architecture, the third day will provide a thought provoking finale to the event for visitors.”

Picture: Ecobuild will be out to tempt visitors next week at London’s ExCel

The facts are quite stark – floods have cost UK insurers £4 billion in the last 10 years, a figure that will almost certainly will increase. While the...