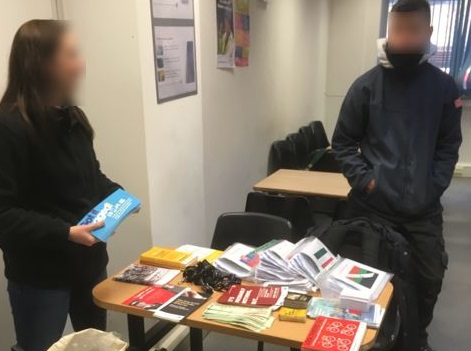 A Modern Slavery week of activity took place from 19 February to 25 February in the City of London as a  number of construction sites were visited and officers held Q&A sessions with construction workers.

Officers from the City of London Police’s Community Policing team and spoke to employees about their rights and entitlements, as part of the National Crime Agency’s campaign to tackle modern slavery and human trafficking.

During the week the officers visited five construction sites across the City. In these visits, officers provided material to raise awareness of what constitutes modern slavery.

They also met staff at the sites to ensure they felt confident in reporting any wrongdoing or concerns to police and answered any questions they had about safeguarding.

What is modern slavery?

Modern slavery is the term used to define crimes which cover holding a person in a position of slavery, servitude or forced compulsory labour or facilitating their travel with the intention of exploiting them afterwards. Although human trafficking often involves an international cross-border element, it is also possible to be a victim of modern slavery in your own country.

The need for building strong connections with the construction industry was highlighted to be important after it was identified that there were cases nationwide of people being exploited by gangs and put to work on construction sites.

Earlier this month, the team visited a construction site in St Mary’s Axe, to hold a question and answer session on modern slavery and human trafficking. The surgery helped to highlight the hidden signs of modern slavery and build confidence and relationships with workers, many of which are foreign nationals.

“Whilst we do not believe that there is a significant problem with these issues in the City, we are determined to raise awareness amongst our communities of being able to spot the signs of modern slavery and human trafficking."

Modern slavery and human trafficking (MSHT) in the UK is far more prevalent than previously thought, according to the National Crime Agency.

A growing body of evidence resulting from an increase in law enforcement activity points to the numbers of victims being much higher than estimated and the threat continuing to expand.

More than a dozen of the highest risk operations targeting organised crime groups are being led by the NCA.

Will Kerr, the NCA’s Director of Vulnerabilities, said: “Modern slavery has rightly been made a priority across law enforcement, but it is a hidden crime so the onus is on us to seek it out. The more that we look for modern slavery the more we find the evidence of the widespread abuse of vulnerable.

“The growing body of evidence we are collecting points to the scale being far larger than anyone had previously thought. The intelligence we are gaining is showing that there are likely to be far more victims out there, and the numbers of victims in the UK has been underestimated.”

Picture: One of the City OF London Police modern slavery surgeries