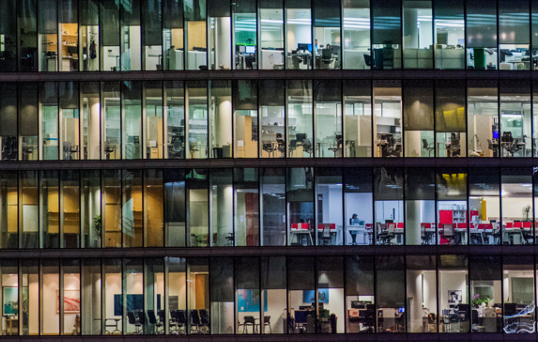 Over-lighting offices not only increases energy use, but it can also drive up the embodied carbon of a building.

We spoke to sustainability professionals Mark Terndrup and Chloe Souque from Waterman Group, about the most compelling reasons for rethinking how we light our workplaces, particularly when we consider our net-zero ambitions.

“With an increasing focus on wellbeing, the use of task lighting where it’s needed should be given a greater emphasis in our designs. User control of lighting is already awarded credits by LEED and there is a recognised betterment in wellness through offering people the ability control their local environment. Adding the benefit of delivering whole life carbon reductions through shedding the amount of overhead lighting we install makes the need to adapt our approach to office lighting very compelling.”

For many years, both the British Council for Offices (BCO) and the Chartered Institute of Building Services Engineers (CIBSE) have provided clear recommendations on lighting levels for offices, yet according to Waterman, there seems to be a trend amongst workplace designers to over-light the spaces in which we work.

Even in densely occupied offices, the actual desk surface area in workplaces is typically only 10-14 per cent of the lettable floor plate, so the energy wasted lighting circulation space is considerable.

However, there is still reticence amongst commercial office developers, end-users and designers to cut the levels of light installed through the overhead lighting. This is primarily due to the perception that reliance on a tenant installing lighting would be perceived negatively and reduced illuminance may have a detrimental effect on the marketability of their asset.

New Metrics for the Built Environment

Waterman’s sustainability team believes that by designing to 300 lux rather than 500 lux, power consumption is cut proportionally. Lighting energy use can be reduced by over a third through the implementation of lower light levels in conjunction with localised task lighting where needed.

Coupled with adaptive lighting control which has the potential to cut energy consumption by 40 per cent on its own, the savings can be even greater. Reduced lighting levels cut cooling energy use as well. With lighting typically accounting for over a quarter of an office buildings energy use, the impact on operational carbon emissions is clearly significant.

The London Energy Transformation Initiative (LETI) highlights that building services account for 15 per cent of the embodied carbon in a new build commercial office. This proportion is much greater in refurbishments and lighting is an important contributor to this figure, particularly when we factor that as much as 30-50 per cent of installed lighting in an open plan office might be stripped out during the initial fit-out.

For building services, lighting is generally the element most likely to be prematurely replaced before the end of its economic life span because it is most susceptible to becoming aesthetically outdated. Whilst replacement of lighting can single-handedly rejuvenate the perception of a space its replacement has a significant carbon footprint penalty.

The manufacturing process of office light fittings from the production of raw materials, manufacture of the multiple components, transportation and ultimately disposal/recycling etc makes them very carbon-intensive.

Waterman’s sustainability team, led by Mark Terndrup and Chloe Souque, reviewed the potential for embodied carbon savings through the reduction in design lux levels in a typical office space. The study showed that for a typical office floor with lighting set at 2.8m above floor level, the quantum of fittings can be reduced by as much as 30 per cent. They considered high-efficiency 24W 600mm x 600mm LED light fittings supplemented with 9W perimeter LED downlights to represent a typical office layout.

It was demonstrated that at 300 lux the installed overhead lighting power consumption surpassed the LETI recommended target of 4.5W/m2 achieving 3.7W/m2 compared to 5.8W/m2 at 500 lux. The quantum of fittings dropped from 225 to 156 over a 784 m2 floor area:

Picture: Two figures showing the difference in Watt Per Square Metre in 500 and 300 lux light fittings

Clearly the 30 per cent reduction in light fittings is only realised when compared to the illuminance levels at the upper band of 500 lux. However, even with typical projects designed at 400-450 lux, benefits will be achieved by dropping the design lighting level. Whilst it may be argued that this simple analysis needs to take into consideration the embodied carbon of the desktop lamps this becomes very subjective. Most office tasks don’t require an elevated illuminance level and the need for task lighting is likely to fall.

“In our route to net-zero, it is far better to minimise the materials we initially install in buildings – we should only add them when needed with desktop lightings only provided to employees who request them,” Waterman’s experts said.

The study concluded that even with 30 per cent of desks provided with LED task lighting with intermittent use, operational carbon can be cut by over a third. For our notional 784m2 office this equated to 12 tonnes of tCO2e over a 10-year period – an average of 15kg CO2e /m2 operational CO2 saving.

Although a simple reduction in light fittings may have a relatively small initial impact on cutting a building’s embodied carbon, once factored in with the drop in wastage through life cycle change and through the reduced ongoing maintenance associated with lamp/light fitting replacements, the savings are far more significant.

This aspect is particularly relevant for LED lighting because when faults occur with LED boards or drivers there is a tendency for complete fittings to be replaced rather than the individual components.

Even though industry standards confirm that reduced illuminance for the screen-based work is acceptable, Waterman sees a need to convince those involved in development and design that this is not only an appropriate approach, it brings many positive benefits too.

Picture: A photograph of a large glass-fronted building

Bouygues Energies & Services has completed a partnership with Redcar & Cleveland Borough to replace 90 per cent of the street lighting in the borough with...

In part two of their COP27 roundup, our partners at Planet Mark outline their reflections from the climate conference and hopes for future global...

Professional services firm RPS has launched its first podcast, which will explore how to deliver net-zero in the built environment. “Building Sustainably: The...