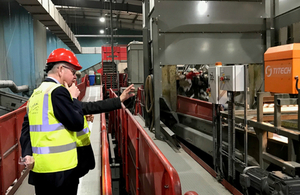 Businesses and manufacturers are to pay the full cost of recycling or disposing of their packaging waste under the government’s Resources and Waste Strategy revealed on December 18.

The move will overhaul England’s waste system, putting a legal onus on those responsible for producing damaging waste to take greater responsibility and foot the bill.

Producers will also be expected to take more responsibility for items that can be harder or costly to recycle including cars, electrical goods and batteries.

The Resources and Waste Strategy aims to eliminate avoidable plastic waste and help leave the environment in a better state for future generations. Amongst other measures, it will ensure consistent labelling on packaging so consumers know what they can recycle; introduce a deposit return scheme (subject to consultation) to increase the recycling of single-use drinks containers including bottles, cans, and disposable cups filled at the point of sale; explore mandatory guarantees and extended warranties on products, to encourage manufacturers to design products that last longer and drive up the levels of repair and re-use; introduce annual reporting of food surplus and waste by food businesses; clamp-down on illegal movements of waste at home and abroad by introducing compulsory electronic tracking of waste and tougher penalties for rogue waste crime operators if they mislabel their waste to dodge tax rules

Launching the strategy at Veolia’s recycling centre in London, one of the most advanced sorting facilities in Europe, Environment Secretary Michael Gove said: "Our strategy sets out how we will go further and faster, to reduce, reuse, and recycle. Together we can move away from being a ‘throw-away’ society, to one that looks at waste as a valuable resource.

"We will cut our reliance on single-use plastics, end confusion over household recycling, tackle the problem of packaging by making polluters pay and end the economic, environmental and moral scandal that is food waste."

Householders will see the existing complicated recycling system simplified according to Gove, with new plans for a consistent approach to recycling across England. Timings for introduction will be subject to discussions at the spring Spending Review.

To help drive up recycling levels, the government will introduce a consistent set of recyclable material for collection, subject to consultation. This will be funded by industry through Extended Producer Responsibility (EPR), which will see industry pay higher fees if their products are harder to reuse, repair or recycle and will encourage sustainable design, subject to consultation. EPR for packaging will raise between £500 million and £1 billion a year for recycling and disposal.

The move builds on the Autumn Budget, which announced a tax on plastic packaging which does not meet a minimum threshold of at least 30% recycled content, subject to consultation, from April 2022. This will address the current issue of it often being cheaper to use new, non-recycled plastic material despite its greater environmental impact.

Speaking at Veolia Southwark’s Integrated Waste Management Facility in London, Richard Kirkman, Veolia’s Chief Technology and Innovation Officer, said: "The government has listened to industry and these steps have the clear potential to dramatically change the way the sector operates to increase recycling and recovery rates. With consistent collections and advanced facilities like this, more recyclable materials can be collected for reprocessing into new products."

Council for Packaging and the Environment

Paul Vanston, CEO of the Industry Council for Packaging and the Environment said: "The focus on whole-system changes is welcome including packaging reforms, consistency of councils’ household collections, and ways to increase investment in recycling infrastructure."

Business in the Community

Gudrun Cartwright, environment director at Business in the Community, said: "By making the most of valuable resources, businesses can lead the way and help turn the tide on waste by 2030. We know that businesses want to come together, take action and get results faster with over 80 major brands signing our Waste to Wealth Commitment to help double the nation’s resource productivity and eliminate avoidable waste.

"2030 is a critical year if we are to ensure we have an environment in which business and communities can flourish. The risks of inaction are enormous but so too are the opportunities that could be created from a prosperous and resilient, low carbon economy."

Sir James Bevan, Chief Executive of the Environment Agency (EA), said: "We support a circular economy and welcome a strategy that will help us all deliver it. The plan embodies a solid commitment to tackling serious and organised waste crime, which drains the economy and blights communities."

Last year, the EA closed down over 800 illegal sites and carried out 93 successful prosecutions.