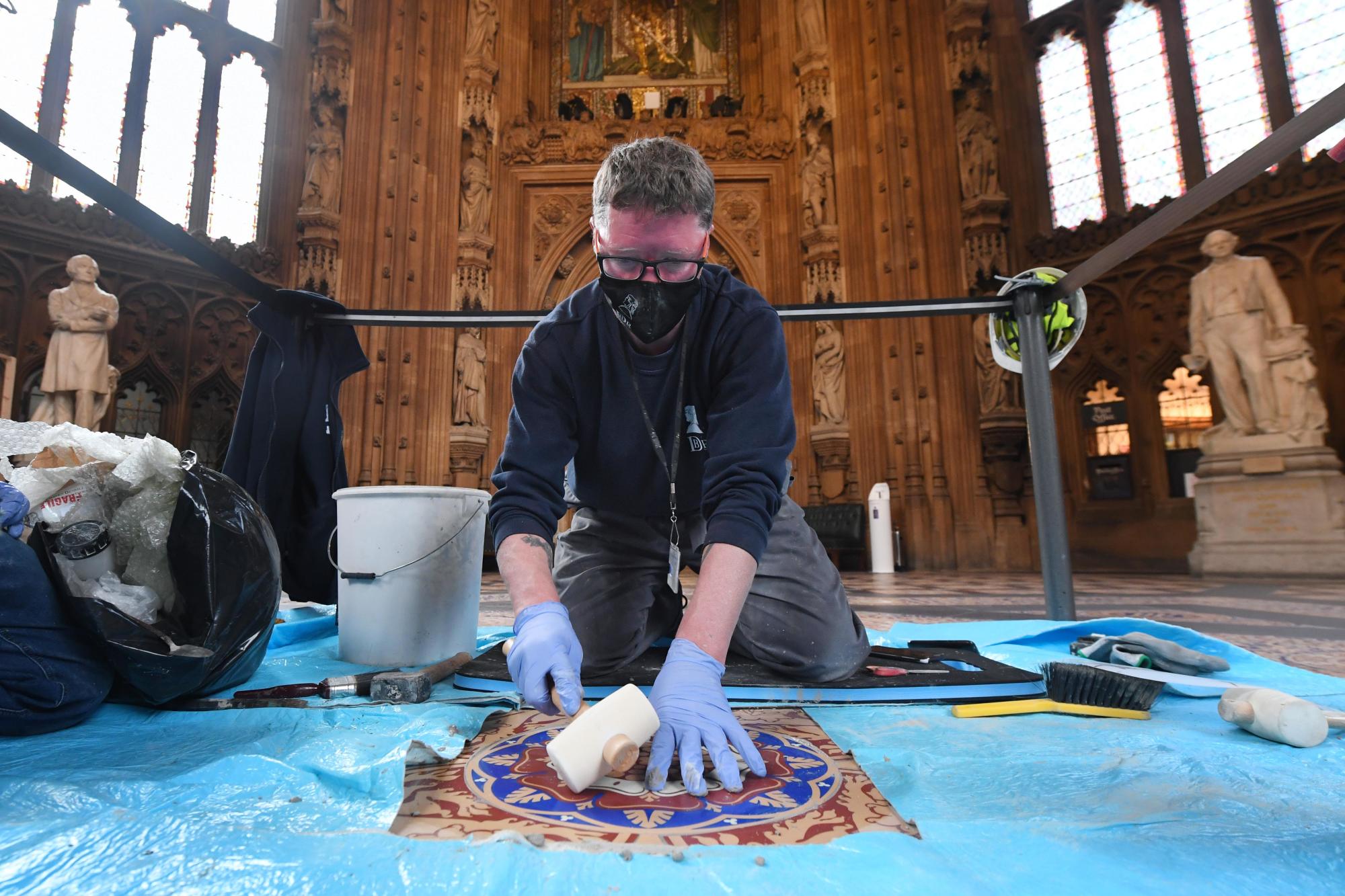 The Palace of Westminster, built during the Middle Ages, has recently undergone a refurbishment to salvage the renowned floors of St Stephen’s Hall.

Stonemasons worked on the encaustic conservation project throughout the palace from 2013 until the end of May this year, when restoration of the entire 1500 square-metre space, comprising a staggering 50,000 tiles, was finally completed.

Picture: a photograph of the interior of the Palace of Westminster

As a royal residence to a number of famous—as well as infamous—monarchs, over time The Palace of Westminster became a meeting place for the first members of Parliament, and the first official Parliament of England, or “Model Parliament”, conjugated there in 1295.

During the reign of King Henry VIII, a fire ravaged through the royal apartments, followed by an even greater fire three centuries later, which destroyed the rebuilt Houses of Parliament. Only a few notable rooms and structures survived, including Westminster Hall, Cloisters Court, the Chapel of St Mary Undercroft and the Jewel Tower.

Architect, Charles Barry, who was known for his use of Italianate architecture, was selected to bring the landmark back to its former glory.

He chose the talented Gothic Revivalist, Augustus Welby Northmore Pugin, to focus on the decorative elements, including the iconic encaustic tiles, the name of which derives from the Greek word meaning "burnt in", or in this specific context, "inlaid". As an iconic feature of the building’s interiors, looking after the palace’s tiling became a constant task, and they were continually laid and changed as they became worn or damaged.

As a public building, heavy footfall, mechanical issues and WWII bomb damages inevitably caused major wear and tear to the flooring over the centuries, leading to the loss of colour and grip. To add yet another complication, Thomas Minton & Sons, the renowned ceramics company and official producer of the encaustic tiles, ceased its production in the 1960s. This meant any tiles manufactured for repairs after this date came from various sources, which couldn’t match the originals. Therefore, a more permanent solution was needed.

When DBR was commissioned by Strategic Estates to undertake this monumental project, its heritage experts realised just how extensive the replacement of tiles had been over the decades.

In the late 1970s and early 1980s, as well as trial areas laid in 1998 and 2004, the inconsistency in artwork quality, and reproduction of the original designs, disrupted the continuity of pattern across the floor.

Furthermore, replacement tiles used in the latter half of the 20th century were around half the thickness of the Minton originals. The original 25mm tiles were laid in soft mortar and could accommodate movement without cracking, whereas the 20th-century ones, at 13mm thick, were designed to be laid on a hard mortar bedding as a floor finish and, as such, were less robust. 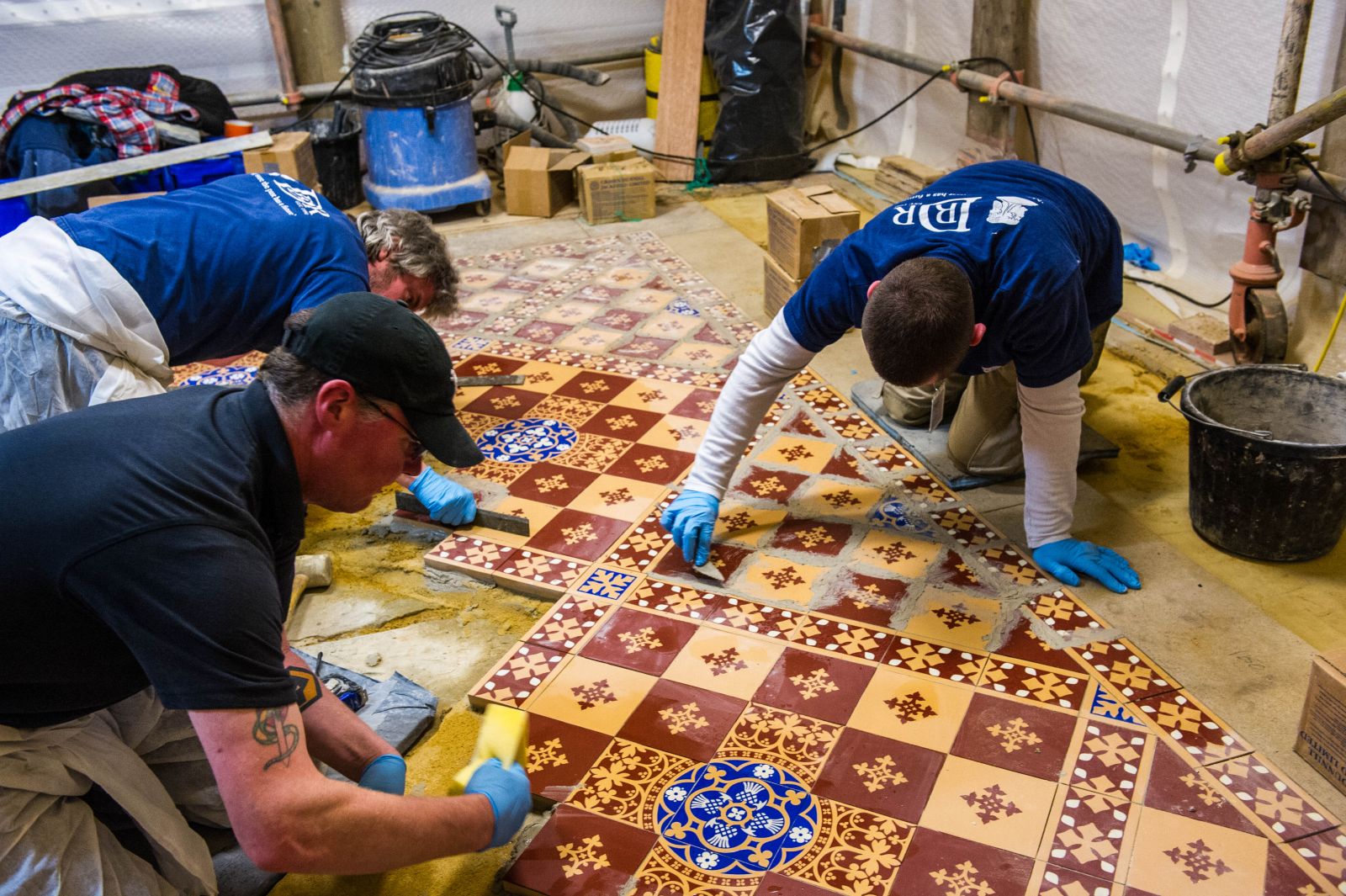 Picture: a groups of stonemasons working on the palace's tiles.

Lastly, previous temporary repairs were carried out using coloured epoxy resins, which was visually unappealing. As a result, some of the tiles had suffered so much damage their inner core began to show.

Commenting on the process, Adrian Attwood, Executive Director of DBR, said, “As it receives nearly a million visitors per year, the Palace of Westminster required high-quality restoration work which would involve replicating the exact original design of the tiles and ensuring they would remain intact for as long as possible.

“We also had to make sure we could conduct these repairs over the years with minimal disruption to Parliament’s numerous employees and visitors. To do this, we set up a controlled environment, consisting of tents and vacuum air filters, which were designed to protect everyone and everything within the space, including the works of art.”

Once the tiles were recorded to an agreed methodology, which included a combination of physical and photogrammetric surveys, the project then required a great deal of skill from DBR’s stonemasons. They had to work with 1.5 millimetre joints, manage dust and moisture control, carry out repairs to the sub floors to deal with cracks and maintain the fine tolerances in the floor layout.

Remarking on the first tiles laid nearly two centuries ago, Pugin wrote a letter to Herbert Minton of Thomas Minton & Sons, in which he said, “I declare your St Stephen’s tiles are the finest done in the tile way, vastly superior to any ancient work; in fact, they are the best tiles in the world and I think my patterns and your workmanship go ahead of anything.”

Echoing this statement, Attwood concludes, “Despite multiple fires and even war, this iconic landmark has stood strong over the centuries. The marvellous encaustic tiles found throughout the Palace can be considered as much a work of art as the glazing, murals and statuary, and we are honoured to have worked with Strategic Estates to help restore one of the site’s most beautiful and historically significant architectural features for future generations to appreciate and enjoy.”