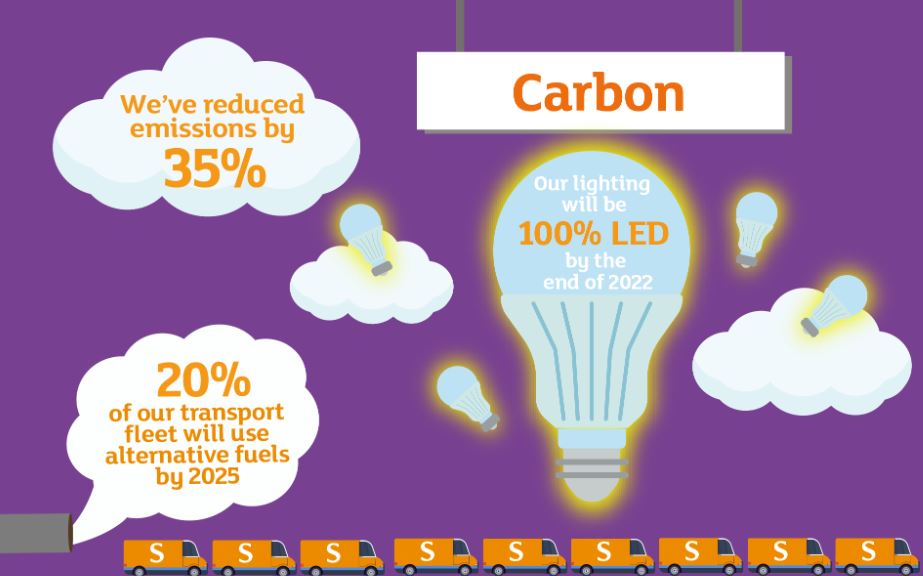 Following news of Sainsbury’s £1 billion commitment to become net-zero by 2040, programmes will be implemented across the Sainsbury’s business that focus on seven core areas to tackle climate change.

Sainsbury’s will reduce Greenhouse Gas emissions within their own operations to net-zero, increasing the use of renewable energy. 1,400 Sainsbury’s stores have been fitted with aerofoil technology, keeping fridges cool and aisles warmer and saving 15% of the energy used by the fridge. 17,547 tonnes of CO2 were saved through a staff behavioural change project.

The retailer will increase the use of renewable energy, while reducing overall energy usage. Fridges will be made as efficient as possible through the use of technology and increasing the use of natural refrigerants.

Sainsbury’s will increase the percentage of their fleet using alternative zero and low carbon fuels to 20% by 2025. By the end of 2022 all Sainsbury’s stores will be 100% lit by LED.

Sainsbury’s will minimise the use of water in their own operations, driving towards water neutral by 2040. As the first retailer to be certified with the Carbon Trust Water Standard, Sainsbury’s uses 1 billion litres less water annually than in 2005. 170 stores are fitted with rainwater harvesting facilities and these are fitted as standard in new stores.

Sainsbury’s will also review every aspect of water use in its business, measuring and lowering the amount of water used in bathrooms and will look to recycle water from areas such as ice on fish counters and carwashes .

Sainsbury’s will halve plastic packaging by 2025 and then go further - the first UK supermarket to make a commitment of this scale. Sainsbury’s removed thousands of tonnes of single-use plastic across the business in 2019. From fresh food plastic trays (412 tonnes) to 290 million loose produce plastic bags and 20 million polystyrene pizza bases (180 tonnes). The company also replaced 1,200 tonnes of own brand PVC packaging with recyclable alternatives.

By the end of 2020, dark coloured, hard to recycle plastic and polystyrene packaging from own brand ranges will be replaced with recyclable alternatives. Where possible plastic film on fruit and vegetables will be replaced or removed. By the summer of 2020, Sainsbury’s Home Cookshop transit packaging will be removed and replaced by paper, removing 662 tonnes of plastic.

“Our commitment has always been to help customers live well for less. We must recognise that living well now also means living sustainably.

Sainsbury’s will increase the use of recycling in their own operations and make it easier for customers and colleagues to recycle. Sainsbury’s provides facilities to help customers recycle metal cans, glass, plastic, paper and other materials in 275 stores nationwide as well as repurposing 5,000 tonnes of clothing annually through donation banks in 340 stores and carparks.

Sainsbury’s is piloting Deposit Return Schemes in five stores where customers recycle plastic bottles in exchange for a 5p per item coupon towards their shopping.

Sainsbury’s is committed to reduce food waste by 50% by 2030. The store chain has developed innovative packaging and clearer labelling to increase the shelf life of products and let customers know how long they can keep them for, meaning less food goes to waste.

Sainsbury’s has sent no food to landfill since 2013. Sainsbury’s has 2,093 food donation programmes in place across supermarkets and convenience stores, ensuring that 87% of Sainsbury’s stores redistribute food to good causes locally.

Sainsbury’s will increase the amount of food it redistributes that is fit for human consumption and will talk to customers more about how they can reduce food waste at home.

Sainsbury’s will develop and deliver healthy and sustainable diets - the retailer was the first to introduce front of pack traffic light labelling in 2005 and in 2016 was the first supermarket to stop food multi-buys.

In 2015, Sainsbury’s introduced calorie labelling in cafes. Those cafes also offers the equivalent of two portions of vegetables in more than half of children’s menu options.

In 2019, Sainsbury’s was the first UK supermarket to trial selling meat-alternative products in meat aisles, nudging customers to a healthier and more sustainable lifestyle.

Sainsbury’s will drive sales of both healthy and healthier products, nudging customers towards the Eat Well Guide.

Picture: Just some of the areas Sainsbury's are tackling in the effort to achieve net-zero.

A circular letter has been published by the UK Government to explain the minimal energy requirements in new buildings, that have been extended from the public to private...

Avoiding climate catastrophe and its irreversible changes to the earth’s climate systems is the greatest global priority. Legal & General sees the task of...