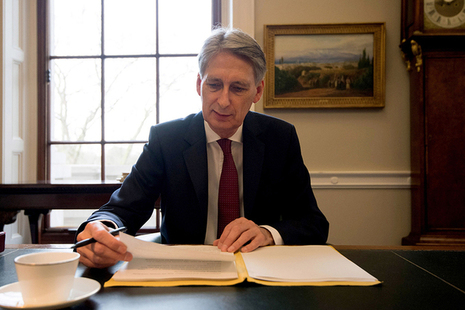 No Budget this time around but Chancellor Hammond has issued his Spring Statement - here's what you need to know with a summary of what Philip Hammond said in Parliament:

The Spring Statement gives people and businesses certainty and stability to plan for the future. Major tax or spending changes will now be made once a year at the Budget in the Autumn.

In April 2018 the National Living Wage will rise to £7.83. National Minimum Wage rates for under 25s and apprentices will also rise.

The tax-free personal allowance – the amount you earn before you start paying income tax – will rise to £11,850 from April 2018.

At Autumn Budget 2017 it was announced that business rates revaluations will take place every three years, rather than every five years to makes bills more accurately reflect the current rental value of properties. However, the next revaluation, currently due in 2022, will be brought forward to 2021.

£1.7 billion was announced at Autumn Budget 2017 for improving transport in English cities. Half of this was given to Combined Authorities with mayors. The government is now inviting bids from cities across England for the remaining £840 million.

The Autumn Budget 2017 launched a £190 million Challenge Fund to help roll out full-fibre to local areas. Hammond has now allocated the first wave of funding, providing over £95 million for 13 areas across the UK.

Disposable plastics like coffee cups, plastic cutlery and foam trays damage our environment. The government is seeking views on how best to use the tax system to encourage the responsible use of plastic.

Some of the money raised from any tax changes will be used to encourage the creation of new, greener products and services. In addition, £20 million from existing budgets will be given to businesses and universities to research ways to reduce the impact of plastics on the environment.

Seeking views on the role of cash in the new economy

While cash will continue to be an important method of payment, more people are moving towards digital payments every year. The government is seeking views on what more it can do to support people and businesses who use digital payments, ensure that those who need to are able to pay with cash and prevent the use of cash to evade tax and launder money.

Supporting people to get the skills they need

To support upskilling and retraining, the government is seeking views on extending the current tax relief to support self-employed people and employees when they fund their own training.

An investment programme of at least £44 billion over the next five years was announced at Autumn Budget 2017, putting the UK on track to raise the supply of homes to 300,000 a year on average by the mid-2020s.

The economy has grown for five consecutive years, and exceeded expectations in 2017.

Employment has increased by 3 million since 2010, which is the equivalent of 1,000 people finding work every day. The unemployment rate is close to a 40-year low. There is also a joint record number of women in work – 15.1 million.

The Office for Budget Responsibility (OBR) expect inflation to fall over the next 12 months and wages to rise faster than prices over the next five years.

The cost of debt interest payments is around £50 billion each year – more than the amount spent on the police and armed forces combined.

Over £1.5 billion has been allocated to departments and devolved administrations to prepare for Brexit in 2018-19. It is part of the £3 billion to be spent over two years announced at Autumn Budget 2017.

Oliver Kolodseike, Senior Property Economist said: "The Chancellor delivered his Spring Statement, which laid out scant initiatives impacting on commercial property. The Office for Budget Responsibility revised up its 2018 growth forecast marginally from 1.4% in the Autumn Statement to 1.5% and now believes that positive real wage growth will return in the second quarter of 2018. This does not come as a surprise. However, it is indeed surprising that the OBR is now more pessimistic about the longer-term outlook for the UK economy beyond 2020. For both 2021 and 2022, it now predicts slower growth. This comes despite the strongest labour market in four decades, a predicted return of positive real wage growth, signs of rising productivity and improving public finances, which should provide the government with extra money to spend should they have to."

Mark Charlton, Head of UK Research at Colliers International said: “Recognising the cost to the UK economy of congestion on British roads (c. £9bn per annum), £1.7bn was announced in the Autumn Budget for improving transport in English cities. Half of this has been allocated to Combined Authorities with mayors. The government is now accepting bids from English cities for the remaining £840m. The resulting infrastructure spend could result in new relief roads and the subsequent release of land parcels ripe for development. This could provide opportunities for the development community - both residential and commercial (retail and logistics).”

John Webber, Head of Colliers Rating, said: “The Chancellor's proposal to bring the next Business Rates Revaluation forward to 2021 and that revaluations would then be every three years rather five, enabling a fairer reflection of rental values, is all very good but it does nothing to help those businesses, particularly the retailers, who are struggling with the system today.  The change from a seven year to a five year, then a four year and finally a three year revaluation system, only underlines how the Government has finally realised how disastrous the seven year 2017 Revaluation really was. The Chancellor has missed a trick in his Spring Budget by failing to properly tackle the issue of business rate reform, leaving many businesses and retailers out to dry, particularly as the 2018/9 rate bills for 1st April start to hit home.”

The Chancellor’s announcement of a new consultation on late payment should be the beginning of the end for unfair payment practices which hit small businesses across the UK, the Federation of Master Builders (FMB) has said.

Brian Berry Chief Executive of the FMB said: “The Chancellor’s announcement of a consultation to tackle the scourge of late payment should mark a turning point on this issue. We should use this opportunity to bring about a spring clean of payment practices which negatively impact on small business. Construction giant Carillion’s collapse at the start of the year brought to light once again the need to eliminate poor payment practises that plague the construction sector particularly.  Indeed, one London based small building firm was once paid more than 270 days late by a construction giant. Now is the time to move away from these unsustainable business models which threaten the existence of many firms and their supply chains.

"This announcement should be followed by a fundamental rethink ending in the permanent abolition of late payment terms and the exploitative use of retention payments.”

Commenting on the Spring Statement, John Newcomb, Chief Executive of the Builders Merchants Federation said: “The BMF is pleased to see the government focus attention on tackling the issue of late payments which is a big issue for our members, particularly for smaller builders merchants. The collapse of Carillion gave a clear indication of how vulnerable suppliers can be to their customers and we support measures that minimise these risks to our members in the future. In order to keep Britain building and delivering the building blocks for growth, it is vital that merchants are paid quickly."

Cleaning product manufacturer and distributor Robert Scott has revealed the findings of its latest customer research, identifying the key trends that will dominate the...