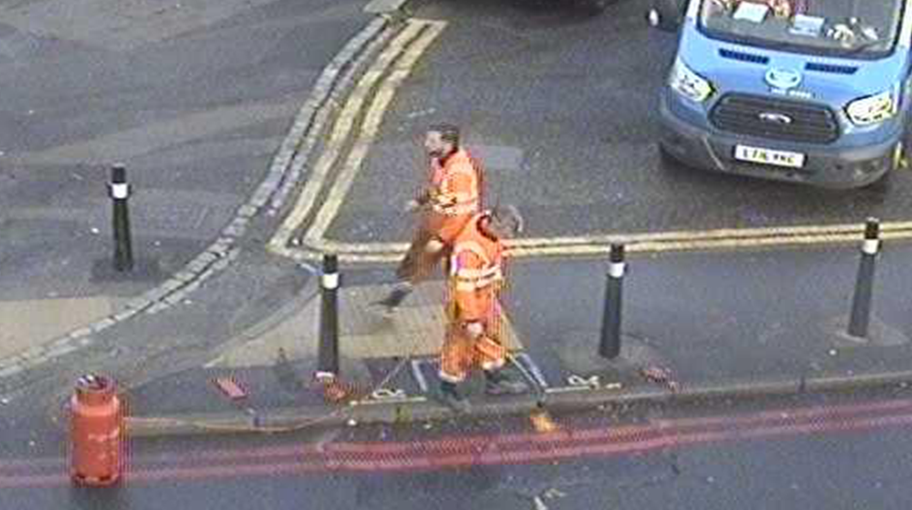 Thames Water has been fined £100,000 for four safety streetworks related offences committed on the Transport for London Road Network.

Thames Water repeatedly failed to adequately sign, light and guard its worksites, or provide people walking and cycling with safe alternative routes to pass the site.

The offences happened on Purley Way, Eltham Road and West Hill in October and November 2019, with prosecution delayed due to the COVID-19 pandemic.

The fine collected will be reinvested in projects to improve the Transport for London road network.

Picture: a CCTV photograph of works taking place on Eltham Road, showing a closed footpath and a person pushing a pram walking on the road

The safety of London’s residents and visitors whilst walking, cycling and using London’s roads is one of TfL’s main remits. TfL must be notified of works being carried out on its road network, which includes London's busiest “red route” roads, so that disruption can be minimised and safety maintained.

Badly managed works can create hazards for people on the roads, as well as cause serious danger for people with disabilities if safe alternative access is not provided.

Pedestrians Forced to Walk on Road

Similar problems were found at Eltham Road, also in October 2019, with further danger caused by a vehicle being parked across the footway. This forced people to walk further into the road, requiring traffic to move into adjacent lanes of oncoming traffic, which could have caused a head-on collision, says TfL.

Thames Water failed to provide details of the exact location, dimensions and other engineering information used in the work on the Purley Way, breaching Street Works Regulations and causing a significant impact on the road network.

Glynn Barton, TfL's Director of Network Management, said: “We work hard to keep London moving and, as part of that, we need the cooperation of utility companies. Ensuring roadworks are safe is vital to keeping people walking, cycling and using the road network safe, which is why we prosecuted Thames Water for breaching these important safety rules.

“We are working with Thames Water and other utility companies to ensure that roadworks are carried out properly, safely and with minimal disruption to road users and the company makes significant improvements.”

Londoners can report disruptive or badly managed roadworks, as well as road defects such as potholes and damaged footpaths, by visiting: https://tfl.gov.uk/help-and-contact/report-roadworks.

Picture: a CCTV photograph of works taking place on Purley Road, showing a lack of signage whilst streetworks are carried out by two people.