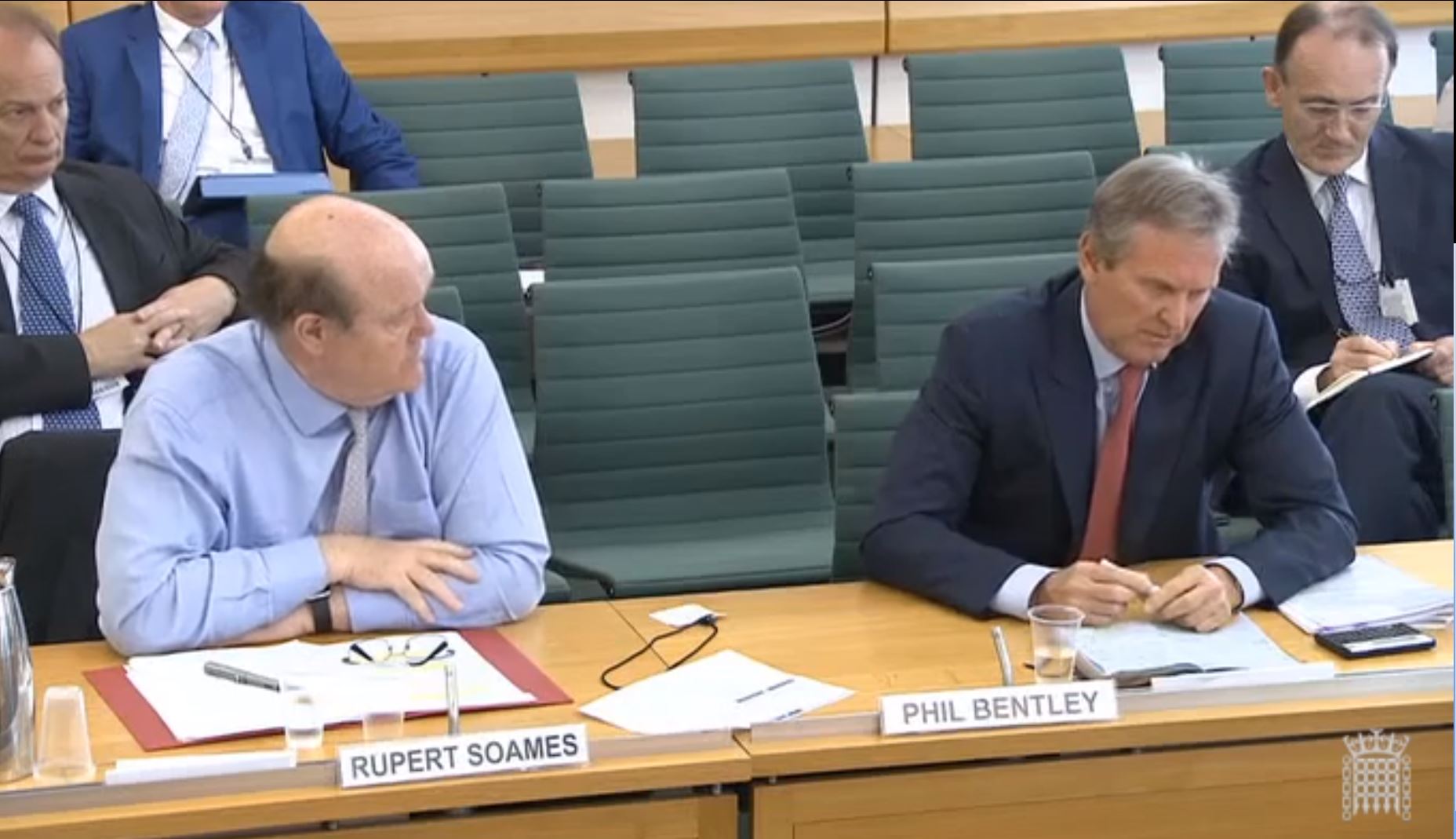 Soames and Bentley both gave a good account of themselves despite occasionally coming under fire from Committee inquisitors as they were asked about the value and scope of outsourcing and what lessons can be learned from the collapse of Carillion - especially with regards to the procurement of services.

Bentley was first to speak in the confines of a Portcullis House (next to the Houses of Parliament) Committee room at 10.00am. He said he'd only been involved with Mitie and the FM/outsourcing business for a year having worked for major companies in industry - recognising outsourcing as a tough business but one of great value to government. He said: "Outsourcing covers a lot of things from construction to specialists service providers and you have to understand the model of each one along with what constitutes the transfer of risk from government to private suppliers. You have to understand the costing the focus and the innovation. And you have to understand the scale - £2 billion to government outsourced providers. What you will find is you get great value and great expertise." Bentley asserted that when you ask 'what is value for money?'  - it's not just about price.

Soames meanwhile was an advocate of competition - saying to best work out how to deliver a service you need choice. In his opinion, services could be provided by charities, government or private companies for example - but you need to test the market and again, not just on price but on expertise and innovation.

When asked what should not be outsourced, Soames was hard pushed to come up with anything that wasn't open for privatisation citing everything from business processes to healthcare provision that could be put out to tender. He did stop at 'decisions over citizens lives' - the making and implementation of laws saying: "We can give parking tickets; we can do benefits tests but the government should apply fines or decide on whether you get the benefits or not."

Bentley chimed in, saying: "The NHS delivers healthcare, we deliver cleaning and equipment maintenance - you have to decide who is good at what. Our PFI schools ensure 100,000 children study in a safe environment - but we don't to the education part of it."

Soames' hackles went up a little when one Committee Member said 96 per cent of benefit test appeals result in a win - clearly blaming Serco for this.

Soames pointedly told the Member, Serco do not do benefits testing - but if they did, it would be the testing (to strict government guidelines) and not the decision making.

Soames found a voice in condemning long-standing Government policy. He said: "Since outsourcing began, Governments have found it convenient to give difficult jobs and those that might become controversial to private companies - it is not right the Government runs away when a difficult job comes under scrutiny." Soames implied Governments make the rules and thus difficult jobs become harder - and it is thus easier for a Government to make out a supplier is doing a terrible job when in fact that supplier is struggling 'with the impossible under the strict criteria laid down by the Government in question'.

Realising he may be on the path to a political faux pas, when asked whether the Government had used outsourcing to cut funding lower than would be the case should a service remain in-house, Soames replied with a swift - 'No'.

At 11:00am or thereabouts, David Walker, Contributing Editor to the Public Leaders Network, The Guardian; Matt Dykes, Senior Policy Office for Public Services, TUC; and Karl Wilding, Director of Public Policy and Volunteering, NCVO - all took a turn to have their say.

May 9 (Committee Room 6, Palace of Westminster) will see the Rt Hon. David Lidington MP, Chancellor of the Duchy of Lancaster and Minister for the Cabinet Office; John Manzoni, Chief Executive of the Civil Service & Permanent Secretary for the Cabinet Office; and Gareth Rhys Williams, Chief Commercial Officer also go before the Public Administration and Constitutional Affairs Committee.

Analysis of lessons learned from the collapse of Carillion and Mitie’s recommendations - by Phil Bentley in a written submission to the Public Administration and Constitutional Affairs Committee.

1. There is an important and valuable role for private sector outsourcing in the provision of public sector services.

The private sector outsourcing industry plays a valuable role in the provision of public sector services, bringing many benefits including savings for Government departments, innovation and leading-edge technology, the transfer of risk, and critically, clear accountability to deliver improved performance.

Recommendation/observation: The sector and the principle of outsourcing is not flawed but there are tangible improvements that can be made to the way in which the public sector procures.

2. Not all outsourcers are the same.

There is as much diversity in the outsourcing sector as there is in financial services. The collapse of Carillion, as has been widely documented, was principally as a result of failings within its construction business, coupled with excessive leverage and governance failures. Mitie, in contrast, is not overly leveraged, has a very broad client base with no reliance on one single customer, has a broad range of services and sources two thirds of its revenue from the private sector. All of this reduces risk.

Recommendation/observation: Government need to fully understand the business model - and financial position - of its supply chain partners, and recognise that not all employ the same model, or rely on the same financial levers. In our view, this can be done at any point in time, but is further strengthened by a commitment to partnership and regular dialogue. We would further suggest that complex public contracts are awarded so as to permit comparability of performance delivery.

There must be sufficient, accurate, timely data made available to government, and from government, to ensure that contracts are procured and awarded based on the most informed information as possible. The quality of data across government departments varies widely, as does ‘pre-market engagement’.

Recommendation/observation: Contracts should be awarded on value, not just on cost. Data that supports the wider value on a contract (e.g.: value to community, jobs, innovation, technology, care and sustainability) need to be included in the way that contracts are assessed. Judgement is required to pick the best solution. ‘Equalising’ all bids, then choosing on price is easy – and wrong.

Whilst all public sector contracting needs to be held to account, the prevalence of ‘legal challenges’ by private sector under-bidders, presents, in our view, a significant obstacle to efficient public procurement, fuelling defensiveness and stifling innovation.

Recommendation/observation: Right to challenge should be restricted, and should be based on evidence-backed, material challenges to either the process of award or the terms of the award. An independent arbitrator should by appointed to decide on whether a right of challenge should be awarded.

Recommendation/observation: We believe a growing collaborative approach to managing change, provision of accurate data and fairer termination notices, with appropriate compensation will rebuild confidence. We also believe this partnership approach will give government departments better solutions and greater value.

Public sector procurement can end up as a box-ticking exercise that fails to give the tax payer and the end user the ’best’ solution. With awards made solely on the basis of the cheapest solution, and little strategic judgement, there is scant regard for creating a win/win solution for both government and contractor.

Recommendation/observation: Cost should not be confused with value. We recommend greater oversight from the Crown Commercial Service to provide a ‘non-executive’ overview of Government contracting departments. There would need, for practical purposes, to be a materiality threshold forging enhanced levels of transparency and accountability on which decisions are actually made.

We believe that public procurement in the UK is relatively sophisticated. The fallout from Carillion has seen the FM industry absorb critical contracts with negligible impact on services, and with the vast majority of Carillion employees taken on by new contract providers. However, the failure of Carillion, and the sector’s structural challenges such as low margins, the pricing of risk and the long-term nature of the contracts that are procured, has aired an important and timely debate on outsourcing. We would support a Code of Conduct, drawn up and agreed with outsourcing partners, that promotes transparency, partnership, value and sustainability.