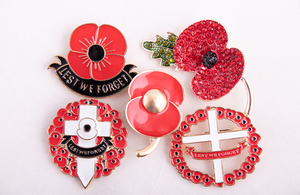 In partnership with the Royal British Legion and the Intellectual Property Office (IPO), it has been found that some online sellers are offering counterfeit poppy badges, scarves and other merchandise.

The Police's Intellectual Property Crime Unit (PIPCU) has already visited a number of addresses recently where officers have spoken to suspects who are believed to be selling counterfeit poppies under the guise of sending the profits to the Royal British Legion.

Detective Constable Geoff Holbrook of PIPCU said: “The callous theft of funds away from valuable charity services is inexcusable. Intellectual property theft is not a victimless crime. Where charities are involved, it is people in need of support who ultimately suffer.

“We are at the heart of ensuring that these people know they are committing a crime and are stopped. We would urge anyone purchasing a poppy to buy through official Royal British Legion channels.”

PIPCU is a department of the City of London Police, the national lead force for fraud. It was established in 2013 with the responsibility to investigate and deter serious and organised intellectual property crime in the UK.

Part of PIPCU’s remit is to protect consumers from harm, focusing on intellectual property crime that has public safety implications. Since its inception, it has investigated intellectual property crime worth more than £100 million concerning counterfeit goods or digital piracy and suspended more than 30,000 websites selling counterfeit goods. These websites have also been linked to identity theft.

British public urged to be aware of poppy merchandise scams

The IPO and The Royal British Legion are urging responsible companies to issue a warning to all staff to be extra vigilant when buying poppy merchandise for Remembrance this year. Their donations are intended to support Armed Forces community men, women, veterans and their families. Instead they could end up benefitting fraudsters if their poppy merchandise turns out to be fake.

The Legion has registered its rights for the poppy goods to prevent such counterfeiting.

The warning applies to poppy merchandise - scarves, jewellery, poppy pins and larger poppy brooches. This does not apply to the traditional paper poppies.

In Autumn 2017, Border Force officers at Tilbury intercepted a shipment of poppy merchandise intended for the UK worth in the region of £150,000.

Intellectual Property Minister Sam Gyimah said: "It is truly shocking that anyone would target and exploit one of the UK’s most cherished charities and take advantage of public support for our Armed Forces community.

"Together we can ensure donations go to the people they are intended for, by only supporting approved merchandise. Be vigilant when you are buying your poppies this year, and look out for the Royal British Legion logo to ensure the merchandise is approved and genuine."

Claire Rowcliffe, Director of Fundraising, from The Royal British Legion said: "It is a sad fact that there are people who actively defraud the public in order to take funds intended for the support of our Armed Forces community. We would urge everyone wishing to purchase a Remembrance poppy brooch, to do so through official channels. For example, you can buy from one of our trusted volunteers, from The Royal British Legion’s online Poppy Shop, or from one of our corporate partners.

"Join with us, the IPO and PIPCU to help make sure your donation doesn’t line the pockets of criminals. We want to make sure that it goes to supporting those who have made such a unique contribution to our society."

Fake poppy merchandise – what to look for

The public are being asked to look out for counterfeit goods in the shape or bearing the image of, the Royal British Legion’s familiar two-petal red poppy or Poppy Scotland’s four-petal poppy in Scotland.

How has Remembrance Day Been Observed This Year?

A special service was held at Westminster Abbey today to mark the centenary of the burial of the Unknown Warrior. It has been the only Remembrance ceremony held indoors...