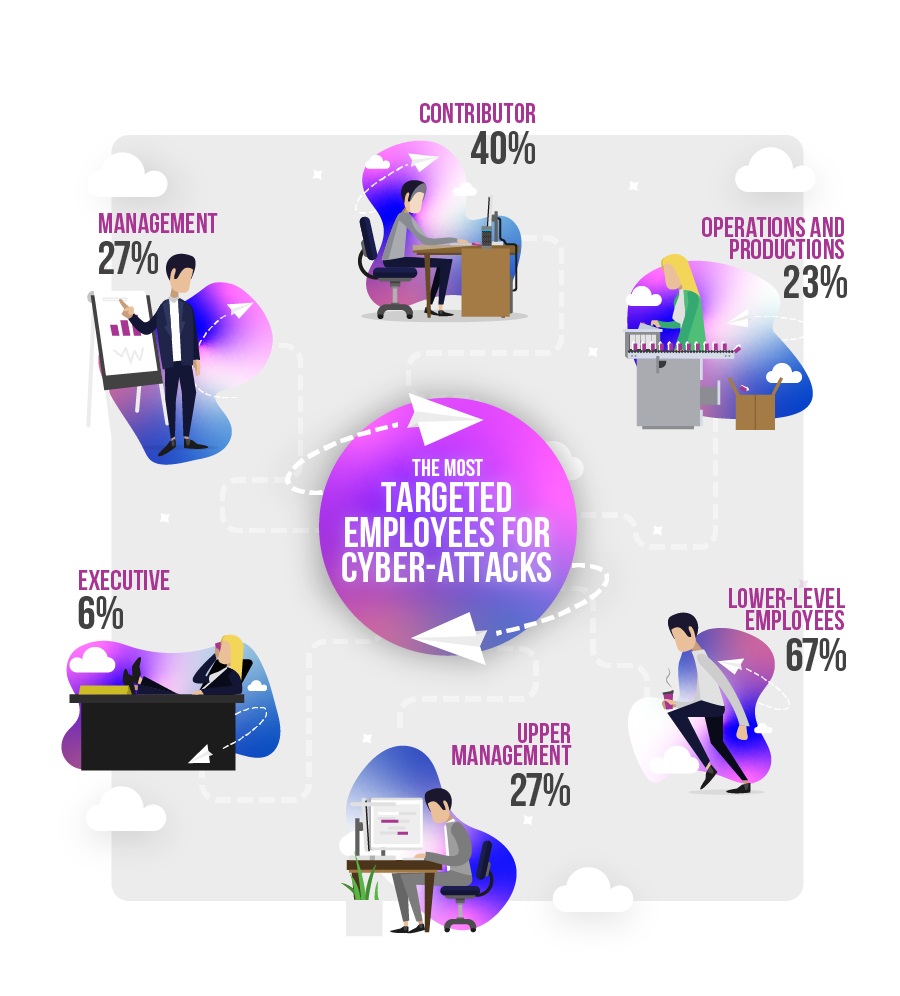 According to Sophos, 70% of internet users have the same password for almost all the web services they use - and there are groups of businesses and individuals who are the worst. Who are they?

With easy to identify passwords, it is no surprise that cyber-criminals go ‘phishing’ for account details (be that bank or social media) and then get in (and lock the user out) with just a few clicks.

By its nature, phishing and malware attacks work by impersonating someone the recipient knows and trusts.

To explore the subject further, digital marketing agency Reboot Digital Marketing Agency analysed the latest findings found within the report ‘Protecting the People: A quarterly analysis of highly targeted cyber attacks’ by ProofPoint to gain a better understanding of who is most at risk of cyber-attacks globally.

Predictably, as a group of individuals within departments ‘Lower-level employees’, such as customer service representatives, were subject to 67% of highly targeted attacks, with those in marketing, public relations and human resources accounting for nearly 20% of all phishing and malware attacks.

However, given that upper management accounts for a smaller proportion of businesses, it suggests that those in C-level positions, directors and department managers may be targeted disproportionately more often.

Interestingly, when considering which industries are targeted the most by email fraud, ‘Pharmaceutical drug manufacturers’ came out on top with 71 highly targeted attacks per company over a period of three months, as per the findings of the report, on average. Closely followed by ‘Construction’ with 61 attacks per company and thereafter, ‘Real estate’ with an average of 54 attacks per organisation.

As a result, Reboot Digital Marketing Agency has gathered five top tips for avoiding malware and phishing scams when at work:

Know what to look for

Pay close attention to attachments, advertisements and pop-up alerts, ensuring you only open what you trust. Train users to spot malicious emails and websites by knowing what to look out for.

Most commonly, you should know the sender of an email and trust the source it is coming from. If unsure, go with the assumption that it is best to avoid opening emails from an unknown source/sender altogether. And although a lot of companies employ malware scanning features, you shouldn’t be solely reliant on this.

Adding HTML can sometimes automatically run malware scripts within an email once it has been opened. For this reason, you may choose to disable it, lowering the risk of an attack.

Many USB and external hard-drives can hold malware and spread across the workplace onto other computers. To be extra vigilant, it is recommended that you scan all external devices with anti-virus software each time you connect an external portal to a computer.

Though this may seem obvious, it is easy to forget to regularly update your passwords or be reluctant to do so in fear of forgetting them. However, for security purposes it is good practice to change your passwords every 90 days.

Picture: The most targeted employees.