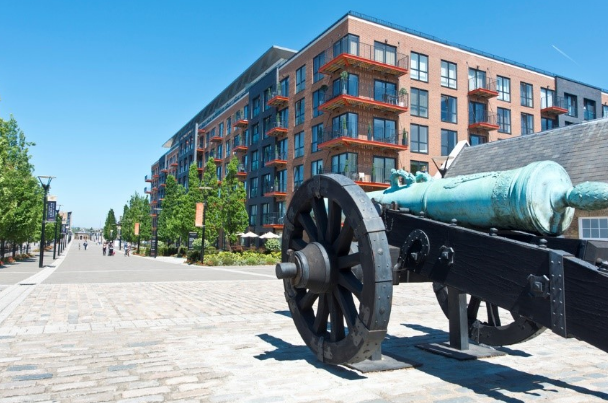 We've got a property digest brimming with stories - including the sad news that Arsenal will not be returning to Woolwich as had been hoped for many years.

When it was first learned back in mid-Feb that British Land had acquired the Woolwich Estate in south-east London for £103 million, many in North London hoped the Woolwich Refugees aka Arsenal were going pluck up the nerve to move back where they came from.

Sadly not, British Land has announced that the 4.9 acre Woolwich Estate will continue as is with improvements that  do not include a football stadium - not even a bit of rough ground where the Gooners could ply their trade.

The scheme does builds on British Land's portfolio of places benefitting from the soon to be completed Elizabeth Line. The Woolwich estate provides predominantly retail, over 50,000sq.ft of residential and 3,000sq.ft of office space.

Meanwhile, Landsec has announced it has secured a resolution to grant a revised planning permission for its proposed 564,000sq.ft development at 21 Moorfields, EC2.

In July 2017 Landsec and Deutsche Bank exchanged a pre-let agreement for the bank's new London headquarters on a 25-year lease, conditional on achieving revised planning consent, with Deutsche Bank committing to take a minimum of 469,000sq.ft. Landsec had already committed to construct the substructure, which is due to complete in March 2019 and now expects that construction will continue straight through to practical completion, anticipated in November 2021.

Aareon UK has opened a new office suite, in Southampton Science Park. The new location is one of three Aareon UK offices. The move coincides with Aareon’s operational merger with 1st Touch, the supplier of mobile and digital workforce software for the UK’s social housing, property services and local government sectors.

Due to open in February 2019, £3.5 million will be spent on building and fitting out the new depot which will sit on a 2.23 acres site.

Fuller’s To At Royal Wharf

Ballymore and Oxley now have an agreement with Fuller’s for the occupation of new commercial space at Royal Wharf.

The London brewer and pub company will occupy a prime commercial unit in the first phase of the development. The new site has direct river frontage and a 2,000sq.ft. area for alfresco eating. It will open for business later in the year. The Royal Wharf development is centred around a high street and local market square, Sovereign Place, with shops, restaurants, bars and cafes leading to a network of streets and squares. Situated on 40 acres of riverside land, the residential development includes suites, one, two and three bedroom apartments as well as three and four bedroom townhouses.

Picture: Arsenal will not be returning to Woolwich as had been hoped for many years